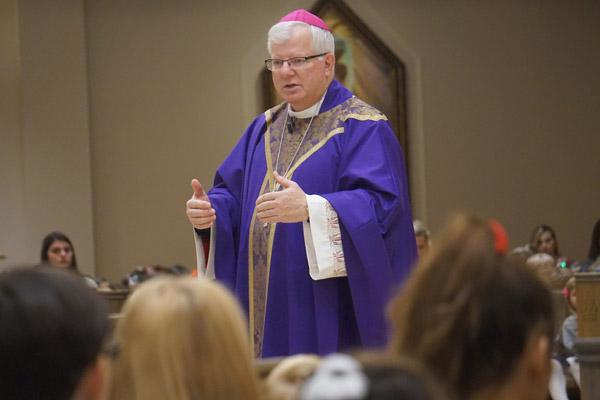 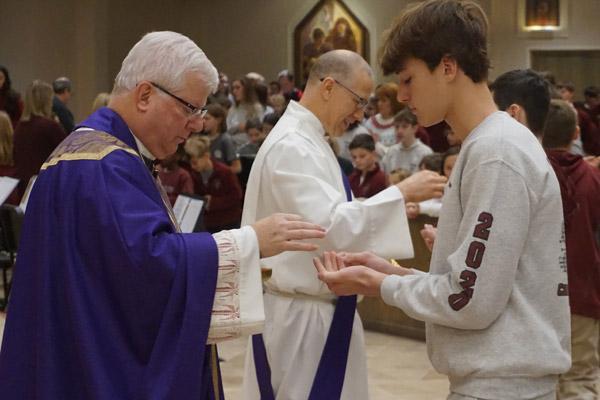 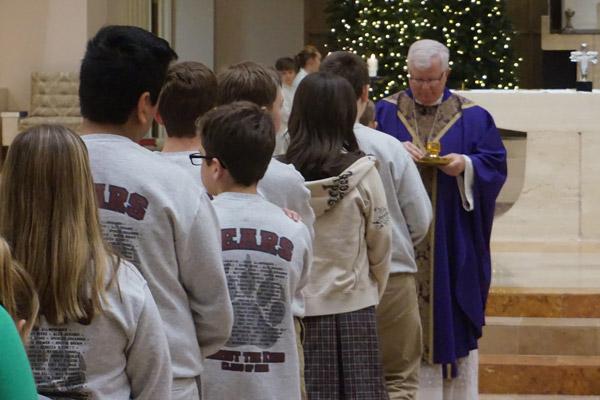 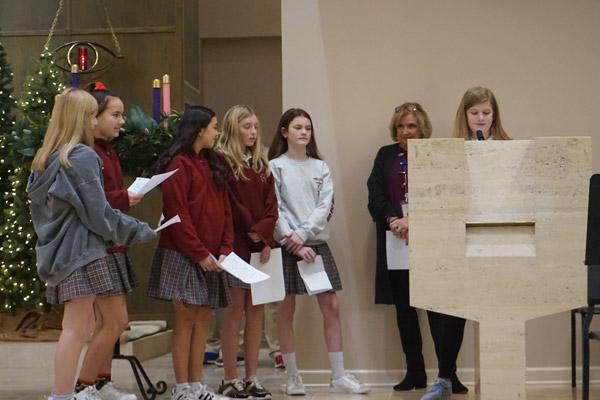 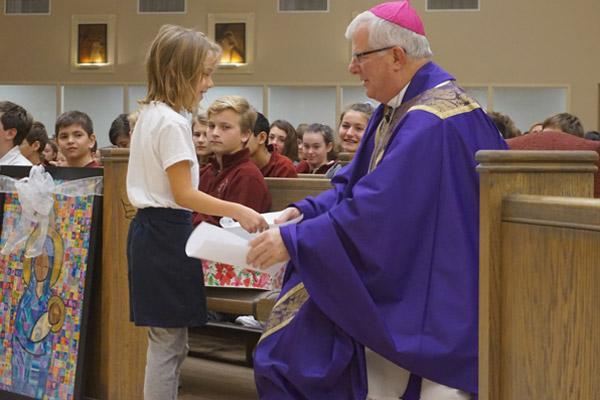 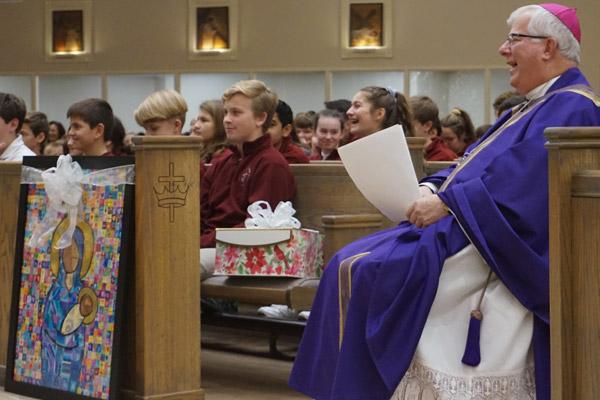 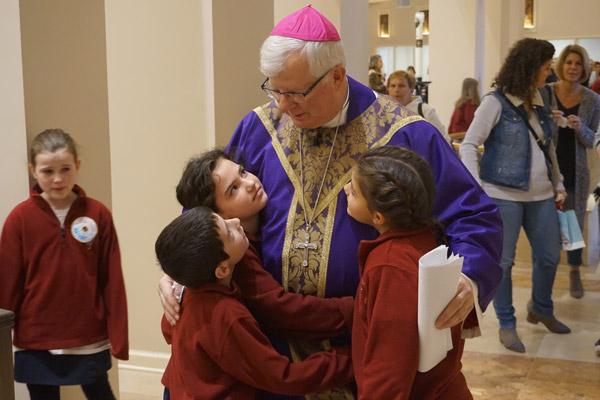 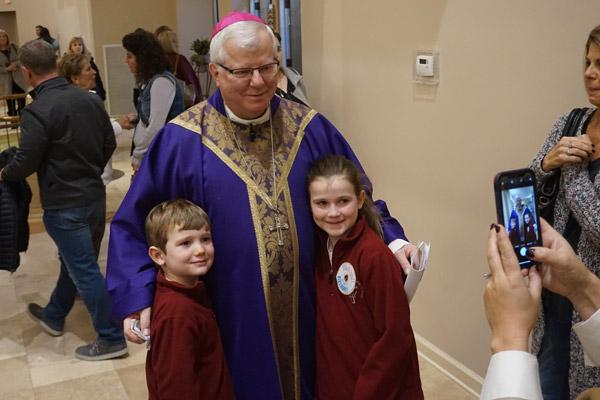 As pastor, a strong advocate for school, Catholic education 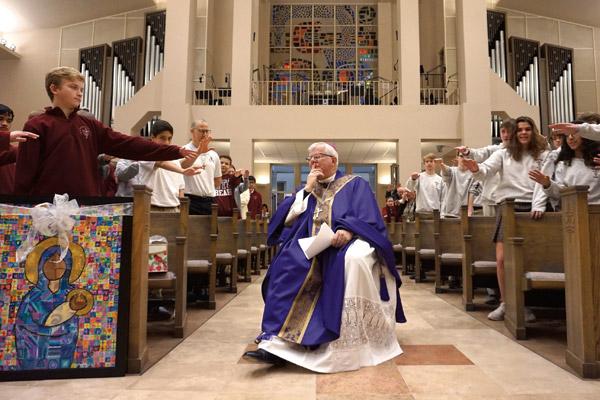 Aprille Hanson
Bishop-elect Francis I. Malone tries to hold back tears while students at Christ the King School pray over him during his final all-school Mass Dec. 20. He asked the students during his homily if they could imagine “being happy and sad at the same time,” which is how he felt about his new role as bishop, but also the emotional goodbye to the students and staff.

Aprille Hanson
Bishop-elect Francis I. Malone tries to hold back tears while students at Christ the King School pray over him during his final all-school Mass Dec. 20. He asked the students during his homily if they could imagine “being happy and sad at the same time,” which is how he felt about his new role as bishop, but also the emotional goodbye to the students and staff.

Read more about Bishop-elect Francis I. Malone's impact on Christ the King School:

One by one, select students at Christ the King School in Little Rock stood at the pulpit Dec. 20, sharing memories or advice with their beloved pastor, now Bishop-elect Francis I. Malone.

“For student council, I loved talking about sushi with you,” Elizabeth Hunter said.

“You’ve baptized me, done confession with me, were there for my first holy Communion and most of all, you have been my hero,” Presley Bailey said.

“I love you with all my heart. You were the one who entered me into this Church, thank you,” Abbey Barnes, “your favorite,” she added.

“You just don’t know, you can’t possibly know what great joy that fills my heart to have known you, to have been here and then the sadness of saying I’m not going to have this here again.” Bishop-elect Malone, to students at his last all-school Mass at Christ the King Church in Little Rock

“If you asked advice from me, I would just say go for it. Don’t even worry about it. Preach like you preached at our church,” Grey Wilkins said.

“I used to live in Louisiana. You should try their two best foods. gumbo and beignets,” Owen Noegel said, improvising at the end that he should root for the LSU Tigers.

While these are snippets of gems from longer letters of cherished memories, all followed the same theme — a great love for their spiritual father and repeating his usual dismissal before school breaks: “Don’t do anything stupid or take any unnecessary risks.”

With each message, Bishop-elect Malone smiled, laughed or wiped away tears, hugging the students.

“He’s very comfortable to be in the school to interact with the kids,” said principal Kathy House, who has worked with Bishop-elect Malone for nearly 19 years. “He’ll go in classrooms and visit with them. He’ll go in the lunchroom and just sit down with kids and eat lunch with them.”

His presence is what will be missed the most. On Jan. 28, he will be ordained bishop of the Diocese of Shreveport, La. After the Nov. 19 announcement that Pope Francis had elevated their pastor to bishop, students have had mixed emotions of sadness and hurt feelings, House said.

“Our Holy Father chose our Msgr. Malone to be a bishop and that’s a big deal. I told the kids we can’t let our sad be bigger than his happy because this is a huge, huge deal.”

In his homily, Bishop-elect Malone began by asking students if they could “imagine being happy and sad at the same time?” He later explained how blessed the parish and school would be to have Father Erik Pohlmeier become pastor and that he would never become an LSU fan.

“You just don’t know, you can’t possibly know what great joy that fills my heart to have known you, to have been here and then the sadness of saying I’m not going to have this here again,” the bishop-elect said.

A framed picture of the virgin Mary, with her robe painted by eighth-grade students, with small crosses or hearts drawn by the rest of the grades surrounding her, was presented to the bishop-elect, along with a spiritual bouquet, letters and drawings. The school choir sang an Irish blessing, as students extended their hands in prayer over a seated and tearful Bishop-elect Malone.

When Bishop-elect Malone became pastor at Christ the King in 2001, he built upon the traditions of longtime pastor Msgr. J. Gaston Hebert while starting several of his own.

At all-school Masses, he began a children’s collection where they could write a good deed, a service they did or a donation of their own money. He meets with eighth-grade elected officers each year to listen and guide their ideas and planned activities, including what charity the collection should go toward. This year, about $6,000 was raised for St. Luke Church in Warren, the 2018 partner for the diocesan One Church program. Bishop-elect Malone passes out report cards and started the Veteran’s Day program for students.

“On the first day of school he goes into every single classroom every year,” House said, and welcomes new students at the school Mass, bringing them up front and asking questions about them.

But it’s second-grade students who are told on day one that it is “the best year of my life.” It’s a phrase Bishop-elect Malone emphasizes throughout the year, as they will make their first Communion and reconciliation.

His pastoral care extends beyond academia.

“When kids have been sick or needed a surgery, he’s anointed the kids at school and gets the whole class together to pray for their classmate,” House said.

On May 20, 2013, in the middle of the parish and school’s capital campaign in which big plans were being drawn up for a family life center, learning assistance classroom and other needed areas of growth, an EF5 tornado ripped through Moore, Okla., devastating Briarwood and Plaza Towers elementary schools, killing seven third-grade students at Plaza.

“We just stopped and were all praying … then we see Monsignor running across the parking lot from the rectory to the school. He said, ‘Did you hear what happened? We have to build a safe room. We can’t build all this and our kids not be any safer from a tragedy like that.’”

In August 2015, parents were introduced to the $2 million safe room, able to withstand 250-mph winds. House said the students have used the 821-capacity multipurpose room to shelter from storms, but also for event preparations, meetings, indoor recess and other things.

“He totally feels the responsibility for the safety of the kids,” she said.

For the faculty and staff, his support is unwavering. House said he’s accompanied her and other teachers multiple times to the annual National Catholic Educational Association conference.

“Most pastors do not take the time to come to the national convention with their principal … when he goes he goes to sessions and learns things,” she said, adding they’ve presented a session on the “dynamic duo,” the pastor and principal relationship at both the NCEA and other dioceses. In 2015, he was given the NCEA Distinguished Pastor Award.

“He and I interview every teacher together … he’s the boss. They report to us, kind of like running a family, you’ve got the mom and the dad. It’s so great to have that support,” House said, adding she will miss his “friendship, guidance and his wisdom.” “I think at this point we’ve got such an easy relationship with each other; we know how each other works and I know what to expect and I know I can count on him when I need him for something. I have the hope and expectation that will happen with Father Erik” Pohlmeier, who was appointed Christ the King pastor Dec. 31.

Started by Msgr. Hebert and continued by Bishop-elect Malone, all teachers at Christ the King are Catholic.

“I just wrote a letter to him. ‘You believed in me when I didn’t believe in myself,’” said second- grade teacher Rebecca Spellins, who grew up at Christ the King and began teaching two years ago. “From the get-go, (he said), ‘You belong here. You are going to be great; I know you can do it.’ It has really informed my self-worth as teacher.”

Jennifer Reynolds, development director of Christ the King School for 13 years, was taught by Bishop-elect Malone in eighth-grade religion while a student at Immaculate Conception School in North Little Rock.

“I just remember hanging on every word he’d say in religion class. He’s so knowledgeable, he could relate so well to us as eighth graders. He really brought it down to our level,” she said.

Bishop-elect Malone recruited her to be the school’s development director when that position was a fairly new concept, responsible for recruitment, retention, marketing and social media outreach.

“He is always open to every new idea, to every strategy I try. He’s very with it, for lack of better words. He tries to stay on top of all the new trends in marketing, education and Catholic education specifically,” Reynolds said.

Reynolds said a big impact on parents in terms of recruitment and retention is Bishop-elect Malone’s presence on campus, at school events and open houses.

“I’ll miss him a lot, but if there was anybody made for bishop, it was him for sure. And I’ve thought that before,” she said. “He’s just a great leader and supportive of his people and Catholic education.”

Read more about Bishop-elect Francis I. Malone's impact on Christ the King School:

SEE MORE PHOTOS related to this story at Arkansas Catholic's Zenfolio page, and order prints if you like. You also can browse other photos taken by Arkansas Catholic photographers.
Click for the Msgr. Malone is bound for Shreveport to be their new bishop index