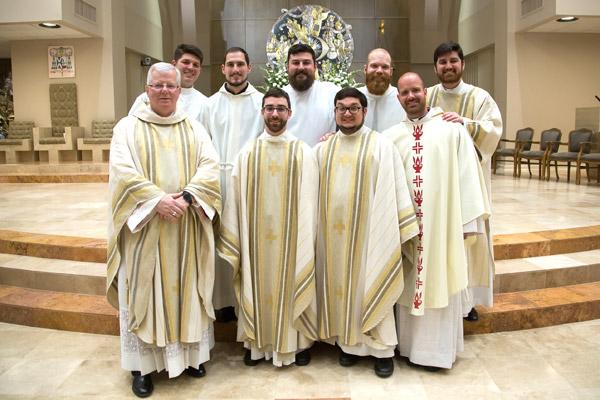 While Msgr. Francis I. Malone was pastor, Christ the King Church grew from having no native vocations to having seven priests ordained or scheduled to be ordained in nine years.

• Two more seminarians — Ben Riley and Brian Cundall — are scheduled to be ordained deacons May 20 and are on track to become priests in 2021.

Read more about Bishop-elect Francis I. Malone's dedication to vocations:

When Bishop-elect Francis I. Malone was ordained May 21, 1977, he became a spiritual father. But during his priesthood and especially his nearly 19 years at Christ the King Church in Little Rock, fatherhood has meant guiding young men in their discernment toward the priesthood and making sure that a religious vocation is seen as a calling to be followed.

As pastor of Christ the King, vocations became a parish mission, which has included establishing perpetual adoration, a parish vocations committee, students at the school praying for and discussing vocations, including letters to seminarians, a thriving youth ministry and support for diocesan youth events, inviting young men and women to consider a religious vocation and merely living out the joy of being a priest.

Example for the state

“What he built there was a culture of vocations in the parish,” said diocesan vocations director Msgr. Scott Friend. “That’s what we need to do in the diocese. He gave the diocese a good example of what are the right things to do to promote vocations.”

“What he built (at Christ the King) was a culture of vocations in the parish. ... He gave the diocese a good example of what are the right things to do to promote vocations.” Msgr. Scott Friend, Diocese of Little Rock vocations director

The vocations committee began in 2005, when Bishop-elect Malone asked Conrad Battreal and his wife Mary to lead it. Part of the outreach includes a Thursday evening holy hour for vocations, asking all the committees at CTK to commit to praying for vocations during Vocations Awareness Week, working with the school vocations committee and the Vocations Chalice program, in which a different family commits to praying for vocations during a designated week, taking a special chalice as a reminder. In December, the chalice was passed for the 700th time. There are 10 people who serve on the committee, including two high school students. Three of the students have gone to the seminary.

“I think Monsignor wanted to bring everybody together,” most prominently with perpetual adoration, Conrad Battreal said.

Mary Battreal said of Bishop-elect Malone’s impact on the youth, “I think these young men just seeing how he’s so devoted to the priesthood and how much it means to them, they’ve seen someone walk the walk and they want to follow.”

According to a 2014 Arkansas Catholic article that factored in current seminarians and now priests, 25 percent of diocesan seminarians were Christ the King parishioners. At one point, 11 seminarians were from his parish. Numbers-wise, it is the parish with the most vocations for the diocese.

“I think the best piece of advice he gave me was to love others in the way you know Jesus loves them,” said Father Andrew Hart, JCL, the first homegrown priest from Christ the King, who was ordained in 2012.

Father Hart, pastor of Holy Rosary Church in Stuttgart and Holy Trinity Church in England, joined the seminary within six months of perpetual adoration established at the parish. His brother, Father Stephen Hart, was ordained in 2017.

Though already graduated from high school when then-Msgr. Malone came to the parish, Father Andrew Hart continually felt supported while discerning at college.

“It was clear to me he loved the Church and wanted to support me as I was thinking about the priesthood and do whatever he could to be a spiritual father,” he said.

His example and that of Msgr. J. Gaston Hebert, who pastored 20 years before Bishop-elect Malone at Christ the King, has carried through into his own priesthood, particularly pastoring at his parish’s school.

“To see the fatherly caring patient way he is a father to the school children really goes a long way in showing us how we need to model ourselves,” Father Hart said.

While it’s one thing to encourage vocations, Msgr. Friend said Bishop-elect Malone’s relationship with God and joy in the priesthood is powerful.

“He’s happy being a priest and that’s important for young people to see … Priesthood doesn’t give you a relationship with God necessarily, that’s something you have to choose just like everybody else. It’s not just functioning, it’s living as a priest,” Msgr. Friend said.

As an altar server around 8 years old, Father Jon Miskin watched as then-Msgr. Malone would prepare for Mass, seeing a clear change in him.

“There’s just a dignity in the way he celebrates, it’s not something ordinary … what it really comes down to is the reverence in which he celebrates, it reflects his love for the Eucharist, his love for the priesthood; it has deeply influenced my own priesthood,” Father Miskin said, who was ordained last year and serves as associate pastor of St. Joseph Church in Tontitown and St. Raphael Church in Springdale.

This dedication he said “gave me permission to open my heart” to a vocation.

Even though seminary formation lasts about eight years, the foundational years are the first 18, established in faith by a family and parish family, Msgr. Friend said. Bevie Davies, who has been youth director for almost 14 years at Christ the King, said Bishop-elect Malone has created a space for youth to be themselves through the CYM program, Team Jesus band and having representation with lectors, ushers and youth representatives on the parish council.

“It goes back to how he’s fostered that safe place to be, the environment he’s created for our youth to safely figure that out,” their vocation, whether it be a certain career or single, married or religious life, she said. “He’s supported our program. I’m on the vocations committee and just that whole committee and that mindset of vocations has spilled onto our program.”

Whether visiting as a seminarian or after being ordained, Christ the King is always home.

“Even as a priest when I went home, I’ve celebrated baptisms at Christ the King, weddings, funerals, Masses,” said Father Patrick Friend, “every time I’m there Msgr. Malone is always so hospitable. He still lets me know Christ the King is my home.”

Just 12 years old when Msgr. Malone came to the parish and school, Father Friend, a teacher and chaplain at Catholic High School in Little Rock, admits he had to “see what this new guy is about,” after his lifelong pastor Msgr. Hebert retired.

What he soon found was a pastor with a deep love and affirmation for young men discerning a life that was “so counter cultural,” he said.

“Something I learned implicitly from him, he works his tail off … I know he takes every funeral he can at the parish, I know he works hard to make sure there’s a beautiful liturgy prepared,” Father Friend said. “Observing that and watching him pour himself out in his ministry is just a lesson in spending oneself in their vocation.”

Even though praying for vocations should be common in Catholic churches, Msgr. Friend said most priests never ask their young congregants about discerning a religious life, but the ones who have “talk about that being a big part of their discernment.”

“Out of the blue he said, ‘Ben, have you ever thought about becoming a priest?’ I don’t know where he got that idea,” but Riley had been discerning. Throughout the next couple of months, Bishop-elect Malone became his “pseudo spiritual director” encouraging him to prayerfully consider God’s call. “… (I was) so fearful of missing out on something. He was very good about having me dispel some of those fears and guiding me to a more mature version of what a vocation truly is.”

Riley, studying at St. Meinrad Seminary in Indiana, is scheduled to be ordained in 2021.

“Being willing to talk to me is something I’ll definitely take with me to my parishes,” he said. “Be open and willing to invite young people to vocations; we can’t be afraid to talk about vocations with young people.”

Daniel Wendel, a seminarian at Assumption Seminary in San Antonio who is scheduled to be ordained in 2022, remembers writing a letter to then-Msgr. Malone in fourth grade, telling him he thought he wanted to be a priest.

“This past semester, he sent me a photo copy of it. He really keeps very involved in all the kids’ lives. I can say just by that, he remembers the small things,” he said, meeting him for the first time when he was in kindergarten. “He was so present to us that he could really learn who we were. He recognized in many of us the call was there and he simply would just be there to help us as we moved along.”

Msgr. Friend said he is grateful for Bishop-elect Malone’s willingness to foster vocations, the financial gifts to the vocations program and being a supportive brother priest. But his legacy continues in Arkansas through the priests he’s mentored.

While Msgr. Francis I. Malone was pastor, Christ the King Church grew from having no native vocations to having seven priests ordained or scheduled to be ordained in nine years.

• Two more seminarians — Ben Riley and Brian Cundall — are scheduled to be ordained deacons May 20 and are on track to become priests in 2021.

Read more about Bishop-elect Francis I. Malone's dedication to vocations:

Click for the Msgr. Malone is bound for Shreveport to be their new bishop index