Coat of arms ties new bishop’s life into one design 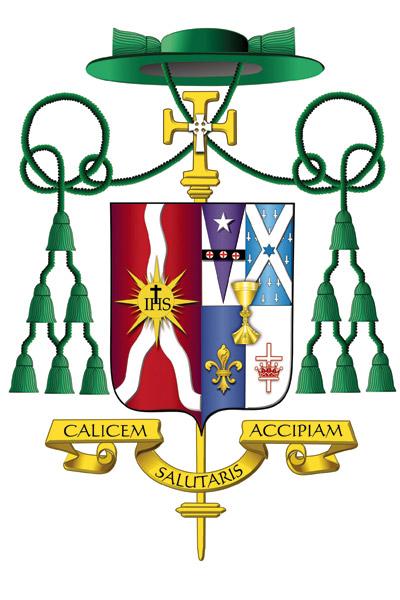 “I will take up the cup of salvation”

“I will take up the cup of salvation”

This is the description of Bishop-elect Francis I. Malone’s coat of arms provided by artist Dr. Scott W.F. Carle. Carle, a member of Christ the King Church in Little Rock, is a well-known botanical artist who assisted in the creation of the crest. The digital version of the coat of arms was created by Susi Galloway, a heraldic artist of Idaho.

The episcopal heraldic achievement, or bishop’s coat of arms, is composed of a shield, with its charges (symbols), a motto scroll and the external ornaments. The shield, which is the central and most important feature of any heraldic device, is described (blazoned) in 12th century terms that are archaic to our modern language and this description is done as if being given by the bearer with the shield being worn on the arm. Thus, it must be remembered, where it applies, that the terms dexter (right) and sinister (left) are reversed as the device is viewed from the front.

On the viewer’s left, the arms of Shreveport are composed of a red field on which is displayed a silver (white) wavy shakefork, which is charged with a gold (yellow) sunburst. The sunburst with the monogram of the Holy Name (HIS) is a classic charge in design for the members of the Society of Jesus, the Jesuits, and it is employed here to honor St. John Berchmans, titular of the cathedral-church in Shreveport who was a Jesuit and an associate of St. Aloysius Gonzaga. Issuant from the sunburst are three wavy bars to signify the three rivers, the Red, the Mississippi and the Ouachita, that run through the Diocese of Shreveport.

On the viewer’s right (known as the sinister), for his personal arms Bishop Malone has adopted a design to reflect his life and ministry as a priest.

His excellency’s personal arms are partitioned into four quarters with his chalice in the center.

The first quarter is the coat-of-arms for the Archdiocese of Philadelphia. This is the city of Bishop Malone’s birth. This charge contains symbols of both the secular and the religious history of this local church. The white background and the black horizontal stripe bearing three white circles (argent, on a fess able three plates) were the arms of William Penn, the founder of the City of Philadelphia, and the first proprietor of the commonwealth that bears his name. To signify the Christian faith, the three white circles are marked with the cross of Christ in red (gules). Behind the stripe appears a blue pennant-shaped section (a pile azure) marked with a white star. This is a symbol of the Blessed Virgin Mary, who is invoked under the title of her Immaculate Conception as the patroness of the archdiocese.

The second quarter (or charge) is the Diocese of Little Rock where Bishop Malone has served as a priest for more than 42 years. The arms of the diocese are rendered in the traditional Marian colors of silver (white) and blue. Tradition tells us that St. Peter, the rock upon which the Church is built, felt himself unworthy to die in the same way as the Lord Jesus, and so was martyred by the Romans by being crucified upside-down. On the representation of the city is placed a silver saltair which, when rendered in silver on blue, is known as “a cross of St. Andrew.” It is used to honor the titular of the Cathedral-Church in Little Rock and to honor the Most Rev. Andrew Byrne, the first bishop of the diocese. On this saltari is placed a blue six-pointed star, which comes from the arms of Pope Gregory XVI, who established the Diocese of Little Rock on Nov. 28, 1843.

The third quarter is the fleur-de-lis. It is the symbol of the Archdiocese of New Orleans where the see of Shreveport is also located. It is a stylized lily, reminiscent of the iris, which is common in Louisiana, composed of three petals bound together near their bases. It is especially known from the former royal arms of France, in which it appears in gold on a blue field and recalls the French heritage of Louisiana. Spiritually, it represents the Holy Trinity. Traditionally, it has been used to represent French royalty, and in that sense it is said to signify perfection, light and life. Legend has it that an angel represented Clovis, the Merovingian King of the Franks, with a golden lily (or iris) as a symbol of his purification upon his conversion to Christianity. In its religious foundation, the “fleur di lis” or the “flower of three,” represents the Most Blessed Trinity, into which each Christian is baptized, thus in a unique way unites all of the other charges into one side of the coat of arms as Bishop Malone brings into focus his historical, personal and spiritual foundation as a disciple of Jesus Christ.

The fourth quarter is represented by the symbol for Christ the King Parish, Little Rock, where Bishop Malone served as pastor for 19 years. The cross and crown has served as the icon for the parish for more than 40 years. The image has its theological origin in the crown of victory overshadowing the cross of salvation. Its place among the three other charges represents the years of his service at Christ the King, with the central message of human history, that those who bear the Cross of Jesus will inherit the crown of everlasting life.

In the center of the sinister is his excellency’s chalice. In 1959, Msgr. John L. Nugent became the pastor of Bishop Malone’s home parish, the Nativity of the Blessed Virgin Mary; he remained pastor there until 1978. As a young child Bishop Malone was an altar server and frequently served Mass for Msgr. Nugent. In preparation for his ordination to the priesthood in 1977, Bishop Malone was surprised by Msgr. Nugent’s gift of his chalice to the newly ordained Father Malone. The chalice was given to Msgr. Nugent by his parents in 1929; their inscription is on the bottom of the chalice, as is the inscription of the gift of the chalice from Msgr. Nugent to Father Malone. The chalice is adorned with a gold cross with an emerald in its center. The emerald belonged to Msgr. Nugent’s father. On the reverse side (not seen) is Msgr. Nugent mother’s diamond. In preparation for his ordination to the priesthood, Father Malone’s father placed his wedding ring on the chalice; it can be seen on the right side. That ring was given to Bishop Malone’s father on his wedding day, Jan. 5, 1946, by Bishop Malone’s mother, Pauline. From the time of her untimely death at the age of 37 in 1963, the bishop’s father became both mother and father to the nine children left behind. In 1996, Bishop Malone and his eight siblings gave a two-band gold wedding ring to their father, symbolizing his dual role as mother and father. Upon the death of Mr. Malone in 2001, the two-banded ring was placed on the bishop’s chalice, along with a gold cross bearing nine diamonds, one for each child.

Bishop Malone has chosen as his episcopal motto the Latin words, “Calicem Salutaris Accipiam.” These words hold a special place in his life, especially during the celebration of the Eucharist. Prior to the renewal of the sacred liturgy, when the Mass was universally celebrated in Latin, the celebrant would pray a series of “quiet” prayers throughout the Mass. One prayer, in particular, was the “Quid retribuam” prayer he would utter quietly as he consumed both the Body and Blood of the Lord. The Latin text, which comes from Psalm 116 reads: "Quid retribuam Domino pro omnibus, quae retribuit mihi? Calicem salutaris accipiam et nomen Domini invocabo.” Its English translation reads: “How can I give thanks to the Lord for all that he has given to me? The cup of salvation I will take up, and I will call upon the name of the Lord.” Bishop Malone has prayed these words at each Mass during his 42-plus years as a priest. They have formed the personal intent of his daily reception of the Body and Blood of the Lord.

Symbol of a bishop

The device is completed with the external ornaments, which are a gold episcopal processional cross (with a Celtic cross at its center) which is placed in back of the shield and which extends above and below the shield. Also at the top, is a pontificate hat, called a “gallero” with its six tassels, in three rows, on either side of the shield, all in green. These are the heraldic insignia of a prelate of the rank of bishop by instruction of the Holy See of March 31, 1969.

This is the description of Bishop-elect Francis I. Malone’s coat of arms provided by artist Dr. Scott W.F. Carle. Carle, a member of Christ the King Church in Little Rock, is a well-known botanical artist who assisted in the creation of the crest. The digital version of the coat of arms was created by Susi Galloway, a heraldic artist of Idaho.

Click for the Msgr. Malone is bound for Shreveport to be their new bishop index

Diocese of Shreveport by the numbers

As pastor, a strong advocate for school, Catholic education