Forgiving yourself, others is important lesson, speaker says to youth during retreat 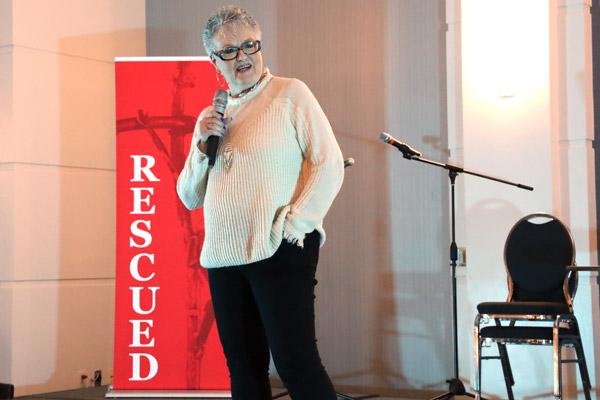 Dwain Hebda
Keynote speaker Cheryl Ward-Kaiser of Salinas, Calif., shares her story of placing her son for adoption and focusing on forgiveness during the Weekend for Life in Little Rock Jan. 18.

Dwain Hebda
Keynote speaker Cheryl Ward-Kaiser of Salinas, Calif., shares her story of placing her son for adoption and focusing on forgiveness during the Weekend for Life in Little Rock Jan. 18.

Youth in the diocese

Read more about other notable youth programs offered by the Diocese of Little Rock:

There was a noticeable difference in the scope of the 2020 Weekend for Life event, titled Rescued by Mercy and hosting hundreds of Catholic high school students from across the state. Amid the familiar songs, skits and prayer was a decidedly broader view of what it means to be pro-life, incorporating issues of suicide and euthanasia along with abortion.

The Jan. 18-19 event is sponsored by the diocese’s Office of Catholic Youth Ministry and put on by members of the office’s Youth Advisory Council.

Noah Ketter of Charleston, 17, a second-year member of YAC, said Weekend for Life is the ideal setting to discuss all aspects of the pro-life discussion.

“It’s a good event,” he said. “You have got to learn the pro-life issues that we face in our society today and the fact that nobody really cares for life like they should. The more people we have educated on that, the more we can help to teach others what they need to know.”

Ketter said he sees a steady erosion of pro-life attitudes from among his peers in school, which presents challenges to him articulating the other side of issues.

“My experience so far is more (young people are) pro-choice; that it’s a woman’s body, she can do whatever she wants with it. That kind of attitude,” he said. “I do what I can telling them that it is a life from conception, and I think that’s one of the biggest things that people can’t just get ahold of.”

Noah Koch, 16, of Morrilton, was attending his first event. He said he was looking to better educate himself on the finer points of the pro-life movement.

“I want a better understanding about what we’re marching for and what we’re defending,” he said. “I know the outline and what I believe and what Catholics are supposed to believe as our dogmas and doctrines, but I want to see it in person and get to be a part of it.”

Olivia Hill, 17, from Mountain Home was attending her second Weekend for Life, said she was eager to help educate people like Koch. The first-year YAC member said with so much going on during the event, it can be challenging for first-timers to digest it all.

“I hope (the attendees) go home and are able to help people choose life as well,” she said.

This year’s speaker, Cheryl Ward-Kaiser of Salinas, Calif., shared her story of when, as a young unwed mother, she placed her son for adoption. She said events like Weekend for Life send an important message.

During her hour-long talk, Ward-Kaiser also gave a riveting account of her journey of forgiveness after her family was broken by five criminals staging a home break-in that resulted in the death of her husband.

“That’s a key thing in life is forgiveness, forgiving yourself if you have done something,” she said. “You can forgive yourself for it, you can forgive other people. The power in what that is all goes to the cross, right? If they can see that, hey, even if I have bad things happen to me there’s still good things that can come out of it if I do the right things.”

“We all get dealt a hand; the secret is what you do with the hand. So if you can do the right things with the hand that’s dealt you, you got it.”

Eboni Harrison, who attends Blessed Sacrament Church in Jonesboro, is a recent California transplant who is currently preparing to enter the Church. She said she was attending Weekend for Life to learn the Catholic view of pro-life issues. It’s an education that comes with a cost.

“I believe (pro-choice) is wrong, so I feel like I’m here just to stand for what I believe in. I just want to take away some more knowledge,” she said.

“A lot of my friends from California are very liberal and they are against this. When I told them I was coming, they were kind of upset with me. I just told them, ‘You stand for what you believe in and I’m standing for what I believe in.’”

Youth in the diocese

Read more about other notable youth programs offered by the Diocese of Little Rock: