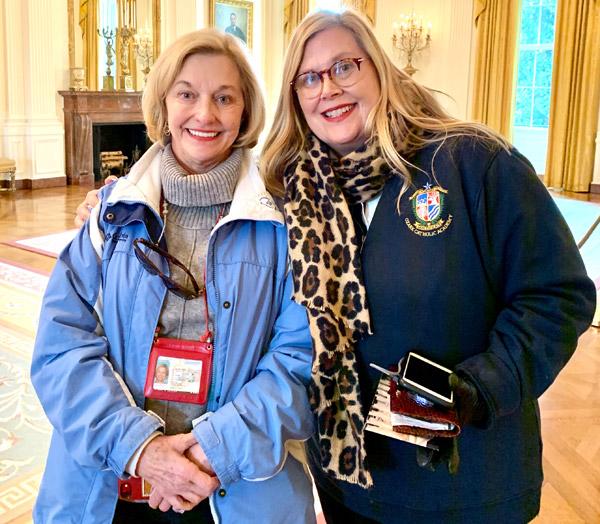 Alesia Schaefer
Linda Gattas (left) stands with her daughter, Beth McClinton, whom she put up for adoption 51 years ago, in the Pontifical John Paul II Institute in Washington, D.C., Jan. 23. The two women reunited just over a year ago.

Alesia Schaefer
Linda Gattas (left) stands with her daughter, Beth McClinton, whom she put up for adoption 51 years ago, in the Pontifical John Paul II Institute in Washington, D.C., Jan. 23. The two women reunited just over a year ago.

Ozark Catholic Academy in Tontitown took 42 students and six faculty members by bus to Washington, D.C. At the National March for Life Jan. 24, they heard President Donald Trump speak. Trump was the first president to speak in person in the 47 years of the March for Life.

They heard lectures from professors and attended Masses at the Basilica of the National Shrine of the Immaculate Conception, St. Anthony of Padua and the Right to Life Mass held at the Capital One Arena.

WASHINGTON — A mother and daughter traveled to Washington, D.C., Jan. 24 to participate in the national March for Life and honor the circle of grace that brought them together more than a year ago.

In 1967 Linda Gattas was an unmarried 18-year-old girl facing pregnancy in an unaccepting time. She had recently graduated from high school, a Church of Christ member living in Memphis with her family. But as her pregnancy began to show, her parents sent her to the Florence Crittendon Home in Little Rock. Desperately lonely, Gattas tried to remain strong and healthy the remainder of her pregnancy.

She remembers the night in April 1968 when she called a cab to take her to St. Vincent Infirmary in Little Rock where she gave birth to a healthy girl. Because the baby was to become property of the state before being adopted, Gattas said she was never allowed to hold the baby. The next day, Gattas remembered, her father drove to Little Rock to pick her up from the hospital, and the subject of what had happened was never brought up in the family again.

“I grieved for the baby. It was very difficult,” Gattas said. “But neither set of parents felt we were ready to take this kind of responsibility on, but it was important to me that the baby go to a Christian family or a Church of Christ family.”

Gattas recalls how stressful the situation was on her parents, yet her siblings — a brother and sister — never knew what had happened.

Following the baby’s birth, Gattas was determined to get her life on track and enrolled at the University of Memphis that summer. She went on to earn her degree in secondary education with an emphasis in home economics and a minor in art.

“I felt like I was on the road to recovery,” Gattas recalled of her college years.

She became a teacher at rural Bolton High School.

She was offered a job in medical sales after teaching and continued in sales with other companies.

Another way Gattas stayed busy was to join a snow skiing club in Memphis. Unlikely as it sounded, she found solace in these meetings, becoming president of the ski club. Her skiing improved and she found the love of her life, James Gattas. After dating for three years, the two married in 1984 and had a son in 1985.

Gattas went with her husband to Mass, and longing for a man with a strong faith life, she converted to Catholicism at 36. With a stepdaughter and a son, Gattas had a family to raise. However, she never forgot about the baby girl she had seen through the window years before.

“I always hoped I would get to meet her one day,” she said.

Years passed, until one day the improbable happened.

“I received an email from her,” Gattas remembers about that day in August 2018. “I went numb.”

Five hours away, anxiously awaiting a response, Beth McClinton received the first communication she had ever received from her mom.

“I’m so glad you reached out, I have prayed for you your whole life,” McClinton read the message on her phone.

The two arranged to meet in Little Rock the next day.

McClinton came from Fayetteville with her husband, Kenneth, and three children, Samuel, 19, Isaac, 17, and Mary Elizabeth, 9. Gattas traveled from Memphis with her husband.

“I knew that behind the door,” said McClinton of the first meeting, “was what I had waited and prayed for my entire life.”

Finally coming face-to-face with a person you have only imagined for 50 years and discovering you shared the same eye color, hair color, mannerisms and laugh was astonishing, Gattas said.

“The biggest surprise,” she said, “is that we were both Catholic. But also how much we look alike, how much we are in sync, and how we pick up after each other’s sentences.”

“The closeness and the familiarity, it was instant,” Gattas added. “It was like finding myself.”

The months following were a blur of celebrations, holidays and catching up. New family members were introduced and their lives were forever changed. McClinton and her family all attended the 70th birthday of their newfound mother and grandmother in Memphis. Likewise, Gattas came for McClinton’s 51st birthday.

McClinton, a parishioner at St. Joseph Church in Fayetteville, remembers the momentous day in 2018 when the records from the Office of Vital Statistics in Little Rock were finally unsealed. She made a trip to Little Rock to see if her records could be found. McClinton’s adopted parents, now deceased, gave her very little information about her birth mother when she was growing up.

“I knew my birthday,” she said, “but I didn’t know my name on the birth certificate until I was a freshman in college.”

McClinton ached to know more, and as she got older inquired at the hospital she was born, sought legal help, took DNA tests and searched out social worker notes but to no avail.

“When they finally found my file in August of 2018,” she recalled, “I didn’t know what would happen. I just wanted to let my birth mother know who I was, and I appreciated the sacrifice and what she had done.”

“My heart was full of love for the life she had given me,” said McClinton who was Methodist before converting to Catholicism.

“When we contacted one another, I had no expectations. But it was amazing! I needed to do it, but I didn’t think there was any way of having a relationship,” said McClinton, who currently teaches at Ozark Catholic Academy High School in Tontitown. “I just had to pray and trust.”

A year and a half later, mother and daughter were reunited, sitting on a bus to Washington, D.C., swapping stories and laughing as if they had known one another their entire lives. They traveled with OCA and McClinton’s son, Isaac, an OCA junior, to celebrate the pro-life decision Gattas made in 1968.

“It’s been quite a year for us,” McClinton said.

Ozark Catholic Academy in Tontitown took 42 students and six faculty members by bus to Washington, D.C. At the National March for Life Jan. 24, they heard President Donald Trump speak. Trump was the first president to speak in person in the 47 years of the March for Life.

They heard lectures from professors and attended Masses at the Basilica of the National Shrine of the Immaculate Conception, St. Anthony of Padua and the Right to Life Mass held at the Capital One Arena.