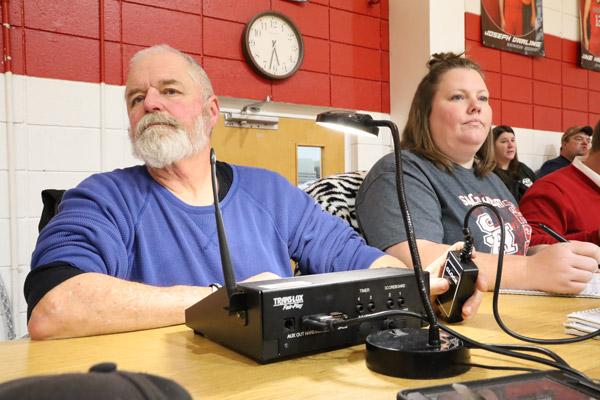 Dwain Hebda
Mickey Powell works the clock during a recent Sacred Heart home basketball game assisted by bookkeeper Ashley Hoelzeman. The duo have been a keeping score for the Morrilton school for the past four years.

Dwain Hebda
Mickey Powell works the clock during a recent Sacred Heart home basketball game assisted by bookkeeper Ashley Hoelzeman. The duo have been a keeping score for the Morrilton school for the past four years.

Morrilton grad makes everyone around him feel better (June 5, 2018)

It’s a brisk January evening and a hot time in the Sacred Heart gym tonight. Tonight’s opponent, the West Side Eagles from Greers Ferry, can’t break the Lady Rebels’ press and steal after steal results in easy buckets.

With each shot that settles through the net and every foul the refs call, the scoreboard blinks. It’s a mammoth contraption for such a small gym; donated by local businesses, it’s something many schools would envy. And running the controls, as he has for so many years even he can’t put a number on it, is Mickey Powell.

“Everybody at Sacred Heart Church and School pretty much knows each other,” he said. “The kids 10 and 12 years old, I know their mom and dad. I watched their mom and dad play basketball or baseball or softball.”

Sacred Heart School in Morrilton is known for its love for basketball. From a very young age, boys and girls here learn the finer points of the game in the hopes of one day having their name alongside the giant banners that hang in the gym honoring state champions.

“I set out to prove him wrong, you know? And I did it. I’m the only one that knows how to run it like that, which is pretty hard to do.” Mickey Powell

But it’s not just coaches and players that have made this program what it is, it’s also the ready corps of volunteers who pitch in in ways large and small, popping popcorn, sweeping the floor, taking tickets. Few, however, have put in the time or are as critical on any given game night than Powell.

“When my son was playing basketball at Sacred Heart, I started helping run the clock and eventually I started doing it all by myself.”

Powell had another excuse to pitch in — his wife Christie was the DRE for Sacred Heart Church for several years before taking a job as youth director for Immaculate Conception Church in North Little Rock where the Powells are now members. But even that change couldn’t remove Mickey from his courtside seat in Morrilton. In tight games and runaways, heartbreakers and big wins, he’s been here, keeping score.

“I’ve seen the coaches come and go. Seen some good ones and seen some mediocre ones,” he said. “Any game with Conway St. Joe or any game with Guy Perkins would be the most memorable games, in my mind. At times, because the gym is small, you can’t hear the referee’s whistle or the horn go off in certain situations. It gets real loud in here.”

Powell cut his teeth on an older model of equipment, which was so fundamental he could run the board and keep the scorer’s book at the same time. All that changed when the school upgraded to the new model a few years back.

“The principal a few years back, Brian Bailey, said one man can’t run it by himself, so I set out to prove him wrong, you know? And I did it. I’m the only one that knows how to run it like that, which is pretty hard to do.”

Powell is quick to share the credit for this feat with Ashley Hoelzeman, a Sacred Heart mom who volunteered to keep the scorer’s book. The two teamed up four years ago and have hit it off ever since.

“I’m a glutton for punishment,” Hoelzeman quipped with a laugh. “A couple of years ago the girl that was keeping the book, her son was going to be a senior and she wanted to be a parent in the stands. I have done it for summer basketball for years and years, and I said I’ll try it. So I tried it and they haven’t pushed me away yet.”

Powell said, “Ashley is the best bookkeeper that they’ve ever had up there. She helps me stay straight. I make a mistake every now and then and Ashley will help me out. The bookkeeper is more important than me anyway. They’re the official book. Mine’s just kind of like a guideline. But still, you can’t daydream up there at all. You’ve got to pay attention.”

Given that four of Hoelzeman’s five children are still students at Sacred Heart, the duo isn’t likely to break up anytime soon. But no matter how many more buzzer beaters and blowouts they have left in them, Powell said it’s been a great ride, a fact he’s reminded of constantly.

“When I go to church at Sacred Heart, I see people there who I’ve watched grow up,” Powell said. “I see folks that I saw on the basketball court from like sixth grade, saw them graduate high school and now they bring their children to watch basketball games at Sacred Heart or they have children playing pee wee ball and stuff like that. It blows my mind.”

Morrilton grad makes everyone around him feel better (June 5, 2018)

Trust God with setting the standards in your life