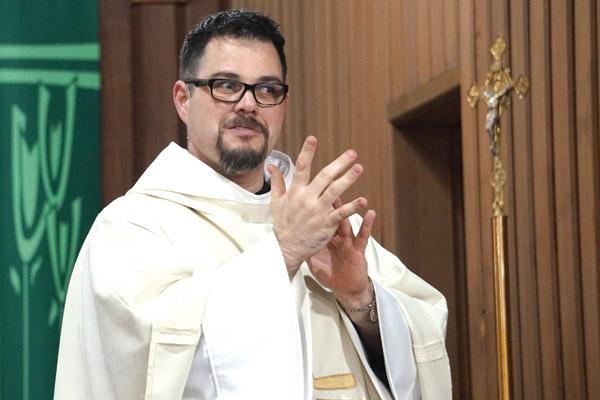 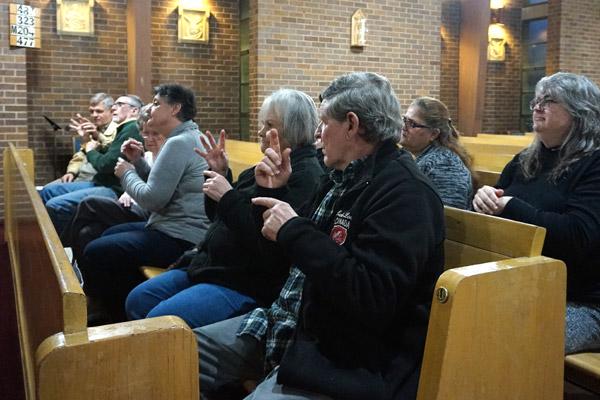 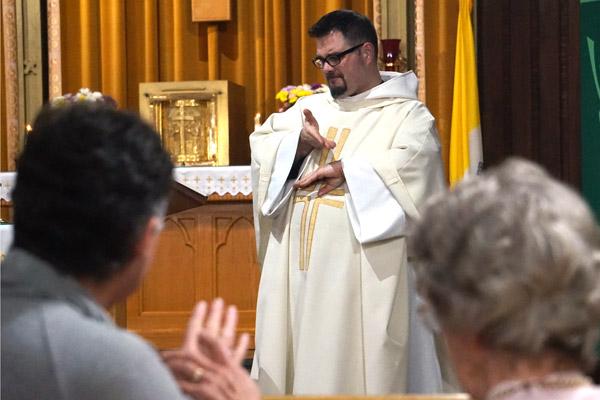 Read more about the deaf community in Arkansas and Father Cassian Elkin's journey to the priesthood:

Catholics who cannot hear ‘are thirsting for encounter’ (July 14, 2018)

It is the first time in Arkansas a deaf Mass has been celebrated regularly in ASL. It was the fourth Mass to be celebrated on the first Saturday of the month.

“I feel so, so moved,” said Jim Quinn, 68, a parishioner of St. Mary Church in North Little Rock for more than 30 years, who was born deaf. “I do honestly feel more of the Holy Spirit in myself. I’m able to see it directly from the father himself signing. I feel the spirit moving in me.”

Father Elkins was ordained a priest at Subiaco Abbey in 2018. Growing up in Southern Louisiana, he learned sign language around 8 years old and later ministered to the deaf and deaf and blind communities, working as a professional ASL interpreter and independent living skills instructor. Though not deaf himself, he is a nationally certified interpreter.

“When someone said this was the first time they ever had Mass celebrated by a priest from Arkansas,” in their language, it touched his heart. “It was one of those moments where you go, ‘Wow,’ and realize we could be doing so much more.”

In between his responsibilities at Subiaco Abbey and Academy as a teacher, abbey choir master and sacristan, he travels every other month to celebrate Mass and host retreats for deaf communities in Texas, Louisiana, California, Alabama, Florida and in Canada. He will speak at the International Catholic Deaf Association-Canadian conference this summer.

Jim’s wife Nancy Quinn, 67, who has served for years as a volunteer interpreter at the 10 a.m. Sunday Mass at the parish and worked with the deaf community for more than 30 years, has prayed for those who are deaf, hearing impaired or deaf and blind to have a Mass in their own language.

“I think there’s a beauty there. Deaf people themselves are doing the readings. I feel honored to be there as a hearing person,” she said.

American Sign Language is not just converting English into signs. It has its own grammar, word formation and order and there is no universal sign language, according to the National Institute on Deafness.

“The role of the interpreter is to hear what they hear and give you the message … When Mass is celebrated in American Sign Language, there’s a different feel to it. He’s not copying someone else’s concept … it’s direct,” said Jim Quinn, who serves as a lector and eucharistic minister.

Anyone is welcome to attend the ASL Mass, though there will be “no voicing.”

There are accommodations that must be made with the rubrics of the Mass. Father Elkins said the minor changes are often dictated by the best sightlines for the congregation, which can include moving the presider’s chair, the large candles and the crucifix on the altar so there’s nothing blocking the view.

“I have been trained by deaf priests. I take my cue from them because they know better. You can’t hold the chalice up and sign at the same time. Typically the action comes first and then the words,” he said, but those changes are not meant to “sacrifice the form and the sacredness of the Liturgy.”

For those who are deaf and blind, interpreters sign the Mass into their hands.

The Quinns signed into the hands of Arthur Babin, 62, and his mother Betty, both deaf and almost blind from Usher syndrome. The Babins are members of Christ the King Church in Little Rock, but attend the deaf Mass. Arthur Babin, originally from Baton Rouge, La., knew Father Elkins when he lived in the state.

“I do have a preference of the priest signing the Mass … you have that direct communication with the priest,” he said.

While the Mass does not have music currently, starting a deaf choir is a possibility.

“I know many deaf people who love to sing. I’ve been in parishes where they’ve had drumming so the deaf people can feel the vibration,” Father Elkins said.

After Mass, the community has fellowship and dinner together.

Joan O’Connor, 62, a parishioner for about 10 years who received a cochlear implant last year, said the Mass is about inclusiveness.

“I think it’s a population that’s not really being served,” she said.

Tricia Tighe, 51, a member for three years, said she enjoys lectoring and, “I’m also happy to hear those stories,” from Father Elkins.

“I feel like family,” she said of the small deaf community. “I hope it grows and maybe there will be a deaf priest.”

“I do think with them coming to Mass those kids can see, and I think spiritually too, there’s that role model,” she said.

Father Elkins said ministering to the deaf community is a rarity, but he hopes it becomes commonplace.

“Especially as a hearing person, a hearing priest, it’s always my hope to see the deaf ministry in deaf hands. I can only do so much, even though it’s a ministry I love and hold dear to my heart … I would love to see a more active role by the deaf community and hopefully see a deaf vocation come from this work,” he said.

Read more about the deaf community in Arkansas and Father Cassian Elkin's journey to the priesthood:

Catholics who cannot hear ‘are thirsting for encounter’ (July 14, 2018)