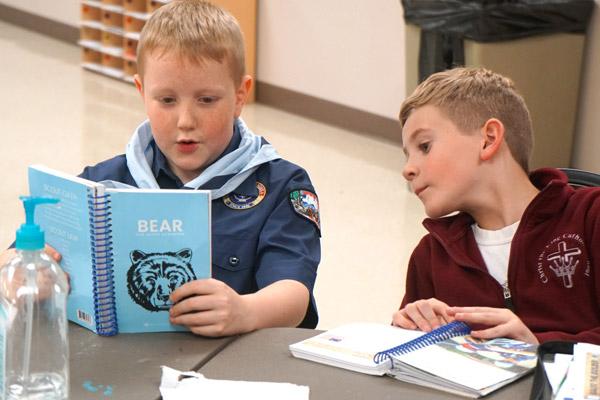 Cub Scout Pack 29 at Christ the King Church in Little Rock is the first in the Diocese of Little Rock to be awarded the gold for the Pope Paul VI Catholic Unit Excellence Award by the National Catholic Committee on Scouting.

Ken King, advancement coordinator and a pack leader, said the 55 boys — 53 of whom are Catholic — earned the honor by participating in religious-centered activities.

“It’s an honor, it’s an achievement, we’re excited about it,” King said. “We hope to continue this and move on, earn a gold every year.”

In the Diocese of Little Rock, there are 11 parish-based Cub Scout packs, ranging from kindergarten to fifth grade, according to diocesan records.

The 10 categories within the Pope Paul VI pack award include participating in Catholic activities, in both local and diocesan levels, and formulating a plan of action for the participants. There currently is not a diocesan scouting committee.

“To get the gold level is impressive,” Foley said. “… Getting that many points means they were very active in the religious program and also retaining boys in the program.”

Gold status is achieved when 1,000 points are earned throughout at least nine categories. The pack earned 1,025 points in nine categories, King said.

The program is an affirmation of the direction the pack has taken the past two and half years when then-Msgr. Francis I. Malone, former pastor who was ordained bishop of Shreveport in January, told the scouting leaders he would like to see more Catholic-centered activities.

At the time, about 25 percent of the boys earned religious medals: the Light of Christ, for second graders that help them develop a personal relationship with Jesus, and relating to their First Communion, and Parvuli Dei (Children of God), helping them discover God’s presence daily, which the third through fifth graders earn for workbooks and journaling that involves Scripture readings, family and friend involvement and guided activities.

Today, 96 percent of eligible scouts — kindergarten and first graders are not eligible — earn their religious medals.

Activities from the National Catholic Committee on Scouting helped guide their work, including the Pray the Rosary series.

Samuel Cruse, 9, a cub scout in the Webelos 1 den, said for the weeks surrounding All Souls Day, he enjoyed praying the Our Father, Hail Mary and Eternal Rest prayers to gain a plenary indulgence for the holy souls in purgatory. It also included confession, receiving the Eucharist and praying the rosary.

“If you could do one of those a day, each day you could free souls from purgatory. We had to go by the columbarium at our church and pray those,” Cruse said.

Joe and Alice Cruse’s sons Samuel and J.D. Cruse, 11, have been involved in Cub Scouts since first grade.

“It helps reinforce a lot of the things they’re doing at school,” Joe Cruse said. “Through the Duty to God requirements, part of the Scout program, I think it helps connect to their duty as a citizen as well. It’s taking all the religious foundation and the curriculum at Christ the King School and it’s helping them utilize it in the outside world.”

King said his den’s best quality is their knowledge of Catholicism.

“When I’m talking to them and asking them questions, they know far more than I did (at their age), I’m a cradle Catholic,” he said. “That’s not because of the pack. That’s solely because of that school. Those teachers over there are doing a really good job.”