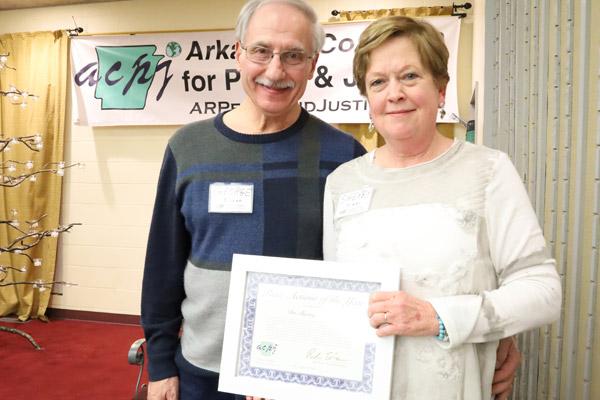 Dr. Sherry Simon was honored Feb. 8 by Arkansas Coalition for Peace and Justice as its Peace Activist of the Year. Simon received the award at the group’s annual membership meeting in Little Rock.

“I’m overwhelmed,” she told Arkansas Catholic before receiving the award. “I was very surprised to hear about that, because during the course of working with all of these organizations since I’ve been involved with Pax Christi, I have met the most wonderful people. I was sort of shocked, actually, that they chose me to receive this award because there are many people who have been doing this a lot longer than me.”

“Sherry is a tireless community advocate, and her ability to connect with others from all walks of life and diverse faiths is a wonderful talent for getting things done,” said Bob Estes, ACPJ chair, who presented her the award.

Simon, founding president of the Pax Christi Chapter in Little Rock, was cited for her incorporating the Pax Christi ministry with the activities and aims of the ACPJ. Under her leadership, Pax Christi participated in several peace-themed events during the past year, including a local peace march, protests against capital punishment and hosting various speakers on themes of non-violence.

Most recently, Pax Christi participated in an anti-war rally in Little Rock with other peace activists.

Pax Christi Little Rock, a chapter of Pax Christi USA, is a Catholic peace and social justice movement, guided by the spirituality of nonviolence, advocating and providing leadership for disarmament, human rights and the care of all creation.

Simon told Arkansas Catholic the concept of peace is universal, but also highly personal. While most people think of nations warring against one another, the seeds of the peaceful revolution are sown much closer to home.

“Another word that we like to use, in addition to ‘peace’, that I think expresses it more clearly, is ‘non-violence,’” she said. “And non-violence is needed in so many different areas of life. When I think of non-violence, I think we first need to find it in our own hearts and that’s something we stress in Pax Christi. We can’t be conceited enough to think we can spread it in the world unless we find it in ourselves first.”

“So, that’s our first step; try to find ways to be more peaceful within ourselves, within our own families, with one another and with other organizations. And then, of course, take that into the world in different causes.”

Earlier in the evening, Simon’s husband Dr. George Simon, was elected to the board of ACPJ. Created in 2000, ACPJ is the successor organization of the Arkansas Peace Center established in the mid-1980s. The organization’s activism focuses on three key areas: peace and nonviolence, social justice and ecology.

More information is available at facebook.com/paxchristilittlerock or by email at .