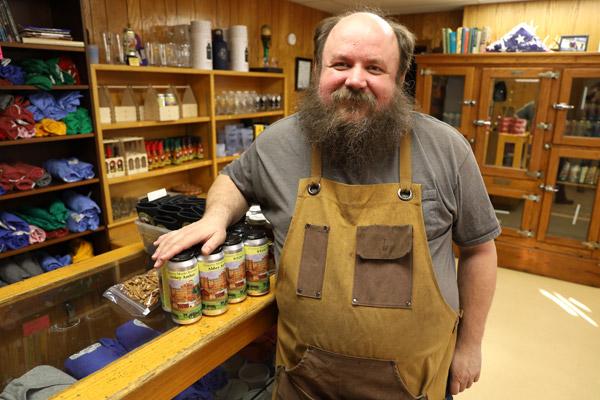 The tap room is open from 9 a.m. to 4 p.m. Saturdays. For more information, email Brother Basil at brew@subi.org.

SUBIACO — It might have taken some time to get here — 141 years to be exact — but Subiaco Abbey’s commercial brewery operation is quickly making up for lost time. Country Monks Brewing, launched a little more than a year ago, has become the toast of the state’s craft beer scene, surpassing even the loftiest expectations of head brewer Brother Basil Taylor, OSB.

“I’m blown out of the water,” Brother Basil said. “I don’t know what to say. We had our business plan, and we doubled what we thought was our projection. And that was a projection we were happy with.”

Even though the current setup is relatively new, beer is believed to have been a staple here for most of the monastery’s history. The original Benedictines came from Germany, which is renowned for its brews, so homemade beer for the monks’ consumption was probably in ready supply.

Brother Basil’s brewing skills predate his entry into Subiaco seven years ago and he was promptly handed the reins of in-house brewmaster duties by Father Richard Walz. Brewing for his brothers quickly led to making beer for Subiaco events, benefactors and friends. By the time the community was figuring out how to pivot out of the cattle business, Brother Basil was ready with a business plan for the commercial brewery.

About $10,000 was appropriated for equipment, permitting and renovation of a taproom, which today is starting to swell at the seams during limited business hours. The abbey has already installed new equipment to help keep up with demand

“Right now, we do 60 gallons in a batch. It takes four hours to brew and essentially two weeks overall,” he said. “That stays the same no matter what your scale is, unless you’re lagering beer like the bigger guys do. Then that’s three to six months.”

Country Monks sells most of what it makes onsite, which last year totaled 100 barrels (about 3,000 gallons) of beer. A portion of suds are consumed by retreat guests at the nearby Coury House, but the primary outlet for sales is the operation’s taproom, a repurposed metal building previously used as a farm office. In fact, patrons sitting on the patio have a front-row seat to the monastery vineyards and even to a passing member or two of the order’s remaining cattle herd.

“All these people that come to the monastery, even from Arkansas, are like, ‘We didn’t know there was a monastery here,’” Brother Basil said. “They hear that there’s a brewery and they’re like, ‘Oh, we’re going!’”

The unique nature of the brewery — a drink perfected by monks being produced by monks in the shadow of an actual monastery — has also proven irresistible to multiple media outlets in the state. And the beer is as good as the backstory. Brother Basil’s creations are starting to clean up at local beer competitions.

Brother Basil has also tinkered with an ever-expanding roster of seasonal brews.

“I’m up to about 12 different varieties right now,” he said. “There was an Irish Red that we did for St. Patrick’s Day last year; it was pretty popular so we’ve been throwing that in the batch about every four or five goes.”

“We got some recipes from a brewery in Fort Smith that closed down about a decade ago, Weidman’s Brewery, owned by a Catholic family. They gave us a few of their recipes, so we do Nut Brown Ale from them.”

The beer has also been showcased at craft beer festivals in Little Rock, Fayetteville and Paris, and Country Monks Brewery was a recent recipient of the monthly Tri-Peaks Logan County Tourism Award. All of which has helped to spread the word, build a local following and attract visitors from around the world.

“We have a map on the wall there with some pins on it to let you know where people have come from,” he said pointing to the studded atlas. “There was a lady from Washington state this morning. We’ve had people from New Zealand; they were passing through, but they heard about us and, ‘Oh a monastery with a brewery, let’s stop and see.’”

Brother Basil has received several requests for distribution of the beer, either by keg or by can. He’s tickled with the response but is comfortable taking the slow and steady approach to growth.

“We have been approached by a number of establishments in Fort Smith and Mount Magazine for kegs, and we’ve been approached by a couple distributors, too. They want to put our beer on the market and sell it for us,” he said. “We definitely have to scale up our batches and make more. It’s amazing, not even being able to keep it on our own shelves.”

“I would rather keep it a little bit smaller, keep it regional, I think. We’re not here for the beer, we’re here for prayer. If we start focusing too much on the labor part and everything like that, we lose our focus on prayer.”

The tap room is open from 9 a.m. to 4 p.m. Saturdays. For more information, email Brother Basil at brew@subi.org.