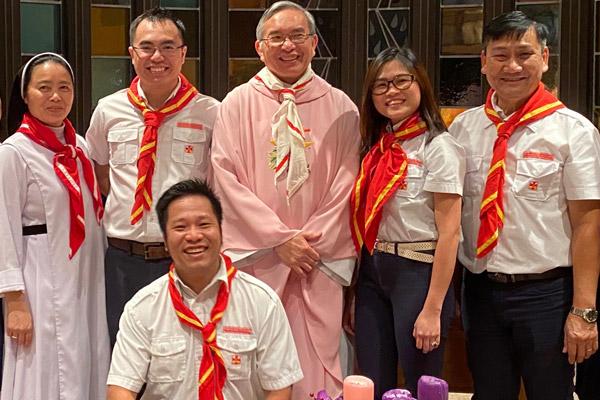 Read more about Vietnamese leaders in the state:

Young missionaries from Barling return to roots of gratitude (July 28, 2018)

ROGERS — It has been 45 years since many Vietnamese people were forced to flee their war-torn country.

When they arrived in the U.S. by boat, they had a few possessions, unable to speak the language and unfamiliar with American culture. Understandably, finding a way to remember and preserve their language and customs was a way to honor their past. Jim and Yvonne Parrish have long understood this.

Members of St. Vincent de Paul Parish in Rogers since 1982, the Parrishes have worked to bring these two cultures together just as they have in their own marriage.

In 1966, Jim Parrish was just 20 years old when he was sent to fight in the Vietnam War. While there, Parrish found love.

“I was wounded,” Parrish recalled. “They sent me as a non-commissioned officer to work in the NCO (Non-Commissioned Officers) club where Yvonne was a secretary.”

Despite language differences, the two fell in love and soon married.

The Parrishes continued living in Vietnam with Jim working for the State Department. All of their five children were born in Vietnam. In April 1975, the family was forced to leave their country.

Yvonne remembers having only five hours to pack the entire family of seven, plus her mom and two sisters, into one medium-sized suitcase.

“We came to the U.S. one week before Vietnam collapsed into chaos,” she remembered. “We were the very first refugees to come to the state of Kansas.”

Yvonne and Jim have been instrumental in bringing the Vietnamese people to St. Vincent de Paul Church and helping find ways for them to be represented in the parish community.

“When they do big events, 100-200 people show up,” parish manager Ronnie Hoyt said. “We encourage them to find ways to be a part of this growing community because the Vietnamese community is vibrant and now includes a youth program.”

The new youth program, the Vietnamese Eucharistic Youth Movement (VEYM), began in January when the new ministry space became available in the John Paul II Center. There are currently around 50 youth enrolled, ages 6 to 17, participating every Sunday afternoon.

The Vietnamese Eucharistic Youth Movement has been a non-profit organization for 35 years. With 140 chapters nationwide, the organization seeks to organize and guide youth in spreading the Good News and encouraging them to work for the good of society.

Parishioners Joseph and Thuy Do, both members of St. Vincent de Paul, introduced VEYM to the parish. Joseph had worked for 10 years at Sacred Heart of Mary in Barling as a leader of the program. When the couple moved their family to Rogers last year, they noticed there were no programs for Vietnamese children.

“We separate the youth into age groups,” Thuy Do, the organization’s secretary, said. “We have age groups from 6 to 9 years old, 10 to 12 years old, 13 to 15 years old, and 16 to 17 years old. Right now, the two younger groups have the largest enrollment, but every week we have new members come to enroll as more hear about the program.”

Read more about Vietnamese leaders in the state:

Young missionaries from Barling return to roots of gratitude (July 28, 2018)

Reflecting on "memento mori" can free us from worry

Make sure wandering thoughts do not turn into idolatry