Hot Springs students can get a free ride to Little Rock 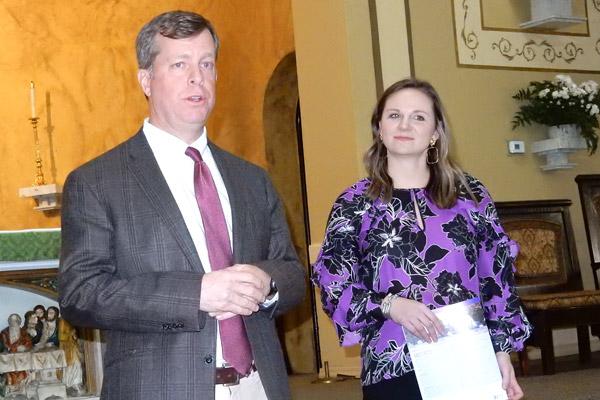 HOT SPRINGS — The commute to Little Rock’s Catholic high schools for at least 10 students from Hot Springs will be much easier after a new school bus provided by St. John the Baptist Church begins its route in August.

St. John Church operates St. John School, which serves pre-kindergarten through eighth grade. Since the school does not have a high school, many St. John students leave in the seventh and eighth grades to enroll in local public and other private schools.

“Many of our kids are leaving St. John’s because their parents don’t want them to be the new kid in high school. They don’t get the opportunity for a full Catholic education,” said Father George Sanders, pastor of St. John Church.

Sadly, the pastor said half of the St. John students leave before they enter eighth grade. The current eight-grade class has eight students.

“We have two great high schools in Little Rock, Catholic High School for Boys and Mount St. Mary Academy, that are available to all of our students,” Father Sanders said.

The pastor and Father Keith Higginbotham, St. John associate pastor and a graduate of Catholic High, toured both schools to see if their idea was possible.

“We have girls coming from 22 different schools,” Cross said. “Our priority goes to Catholic students.”

“Those in Catholic schools are automatically admitted,” Straessle said.

The two described the academic programs and extra-curricular activities that are available at both schools, which are located only one mile apart.

Father Sanders said he realized that cost of transportation was going to be the largest hurdle, but that was solved when a couple, who may be identified later, said they would buy a $58,000 14-seat bus. Father Sanders said the bus will be equipped with seat belts and Wi-Fi so the students can study to and from school.

Janet Edgar, St. John principal, said they have not determined who will drive the bus on the 120-mile round trip, but they are hopeful to find someone who would volunteer to drive. She said the school will fund maintenance and operation of the bus. The bus plans to leave Hot Springs at 6:30 a.m. and return by 5:30 p.m.

“We are still in negotiations with Catholic High and Mount St. Mary to see what they will be willing to contribute to this adventure,” Edgar said. “We are trying to not have any students pay, who are already going to a Catholic school. When we open it up to the community, we may charge families that are not associated with the Catholic school.”

The pastor said there are already 10 St. John School students committed to the transportation program and will be commuting to Little Rock next school year. Edgar said some of the students are already in one of the Little Rock Catholic high schools.

Father Sanders said he would like to expand the program to others in Hot Springs and surrounding communities who have been accepted into Catholic High and MSM.