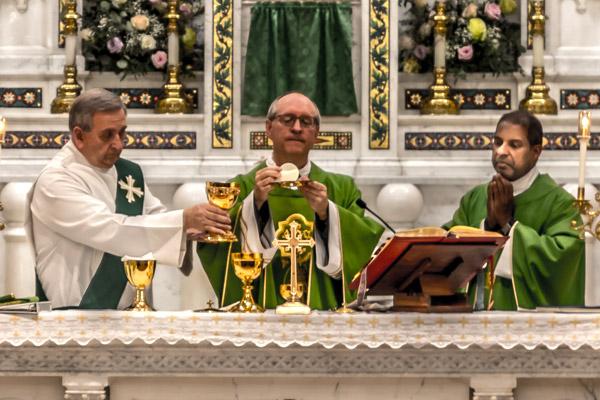 TEXARKANA — Father James P. West, pastor of St. Edward Church in Texarkana known for his smile and promotion of the faith, vocations and pro-life issues, died unexpectedly March 8 in the rectory at St. Edward. He was 59.

He was born Sept. 2, 1960, in Texarkana, Texas. In his early teens, he lived in Korea and learned to read and write Korean. He carried that into his priestly ministry, including celebrating Mass in Korean. At Immaculate Conception School in North Little Rock, he ministered to the children as part of a Korean exchange program in 2011, telling Arkansas Catholic, “Korea is a fascinating, beautiful place and it’s a place not as well known as other places in Asia to Americans.” He also spoke Spanish and ministered to the Hispanic community.

In 1980, he attended Holy Trinity Seminary in Dallas and was ordained by Bishop Andrew J. McDonald on May 31, 1986, at the Cathedral of St. Andrew in Little Rock.

Father West first served as an associate pastor at Christ the King Church in Little Rock. He then served as pastor at St. Boniface Church in New Dixie, St. Elizabeth Church in Oppelo, St. Francis Church in Little Italy, St. John the Baptist Church in Hot Springs, Immaculate Conception Church and St. Anne in North Little Rock. He came back as pastor of St. John in 2011 before serving in his current assignment as pastor of St. Edward Church in Texarkana, St. Elizabeth Ann Seton in Ashdown and Sacred Heart in Foreman in 2017. He was also a prison chaplain in Texarkana.

In celebration of his 25th jubilee as a priest, Father West told Arkansas Catholic that serving as a priest, “It’s turned out better than I thought it would be. It’s been a far greater joy than I imagined. I can’t imagine one could be happier in life.”

Father West had a multi-faceted ministry. In the 1990s, he promoted vocations, including starting a “Second to Nun” and “Boys in Black” programs for the school children in North Little Rock. He was outspoken against abortion. Father West blessed the horses and employees at Oaklawn at least three times during his time in Hot Springs, once riding a stable pony after the blessing.

In 2018, he oversaw the final year of renovating the sanctuary at his childhood parish, St. Edward. In his 2011 jubilee article, he pointed to Psalm 18, verse 2 as one of his favorites, saying “The knowledge that God is the one we must lean on — that we can’t do anything of any real value, apart from him — inspires me.”

St. Edward Parish business manager Brenda Engel, who worked with Father West for more than 18 years first in North Little Rock and then in Hot Springs and Texarkana, said, “Father West and I spoke daily. He was a dear friend to myself and my family. He was the confirmation sponsor for both of our boys, Zach and Austin ... His love for kids is what I remember the most. It is where he was truly in his element, and all kids gravitated to him. It truly was one of his gifts.”

She said his biggest gift as a priest was celebrating funerals.

“He always found the right words to celebrate the life of the many many funerals he celebrated,” she said.

He is survived by his mother, Evelyn Anne West of Texarkana, Texas; two brothers, Kyle E. West and Christopher Alan West, both of Texarkana, Texas; and two sisters, Misti Anne Stewart of McAlester, Okla., and Dawn Allison Swartz of White Hall; and one nephew, Alex Swartz of White Hall. He is preceded in death by his grandparents, Marius and Evelyn Miroir; and stepfather, Gary Alan West.