Parishes in Slovak, Carlisle will be silent in sanctuary, not play recessional hymn 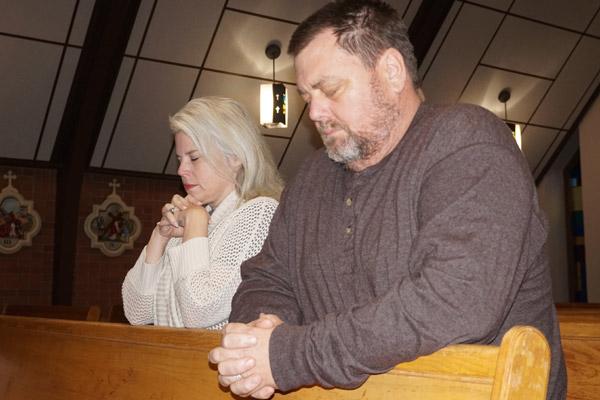 CARLISLE — At 8 a.m. on Sunday mornings, Amy Lisko settles in for prayer ahead of the 8:30 a.m. Mass at Sts. Cyril and Methodius Church in Slovak.

She and a handful of others “clear their mind and prepare for Mass” in sacred silence. But about 10 minutes before Mass, it gets a little noisy.

“There’s been times I’ve gotten up and shut the door to the vestibule,” but as a “newbie,” who converted in August with her husband Andy, who was raised Catholic but had missed some sacraments, she was afraid of being offensive in asking others to quiet down.

For Lisko and all Catholics who crave sacred silence, whether they realize it or not, Father Shaun Wesley, pastor at Slovak and St. Rose of Lima Church in Carlisle, has written a Pastoral Letter on Silence, released three days before the beginning of Lent, Feb. 22.

“It’s been something that’s been on my mind, even in my heart and in my prayer for a while,” he said, feeling that “we’ve lost something” as more people talk in the sanctuary before and after Mass.

“As soon as Mass is over, people burst into conversation. Even people who want to pray aren’t able to do that,” he said.

While the letter is not meant to be a scolding from the pastor, it’s his hope that silence will allow people to have more contact with God and understand “OK, this place is different, what happens here is different, being in the presence of the Eucharist is different.”

For his parishes, he laid out guidelines on how to reclaim the silence:

In his letter, Father Wesley sites Catholic resources that explain silence is part of the celebration of the Mass, including the Catechism of the Catholic Church (no. 2628) and the General Instruction of the Roman Missal 2003 (paragraph 45).

He also shared thoughts from Pope Francis’ general audience on Nov. 15, 2017, where he said in part, “Praying, as every true dialogue, is also knowing how to be in silence — in dialogues there are moments of silence — in silence together with Jesus. When we go to Mass, perhaps we arrive five minutes early and begin to chat with the person next to us. But this is not the moment for small talk; it is the moment of silence to prepare ourselves for the ... encounter with Jesus.”

Father Wesley said while the letter applies to only his parishes, it could be implemented anywhere.

Lisko, 45, said she had been waiting on a letter and homily like that for the four years they’ve attended the parish. Converting from the Baptist faith, she researched online, read books and watched videos on YouTube about how Catholics were supposed to act in Mass.

“Then I saw people talking out loud,” at moments that called for silence, she said.

Steven Means who has attended St. Rose Church for about 12 years, said he was surprised to see the letter “because we’re such a small parish, I think we do an OK job at it.”

However, he has attended larger parishes in the state that could use a little more silence.

“I see it as a problem generally in the Church. I really didn’t see it so much in our small church, but I really like the idea of emphasizing it, and I appreciate what he’s trying to do and the idea of the sacred silence becoming sacred again,” Means said, adding he’s noticed more chit-chat following Mass, “they just talk and they don’t even talk reverently, ‘Ah did you see that game yesterday’ and that kind of talk and I’m just like can we wait until we get out the door? I guess I’m getting old.”

But the 55-year-old cradle Catholic knows that silence and reverence can be a form of evangelization. His fiancé Tara, who converted, told him one of the things that drew her to the Catholic Church was the reverence and respect shown in the sanctuary.

“The sacred silence she noticed right away,” he said, adding when they travel, they seek out smaller parishes for this reason. “When they (people of other faiths) ask me about it why are you so reverent … we actually believe there’s a physical presence of the Lord there. It’s not just it’s time to pray. We kneel in front of Jesus.”

Father Wesley said he would encourage other parishes in the diocese and beyond to promote silence in the sanctuary.

“I think it’s something we all need is to recapture. My hope, my goal is that all of us will grow in our relationship with God, grow in our devotion to the Eucharist and find the quiet we need in the midst of the world around us that’s not quiet at all,” he said.