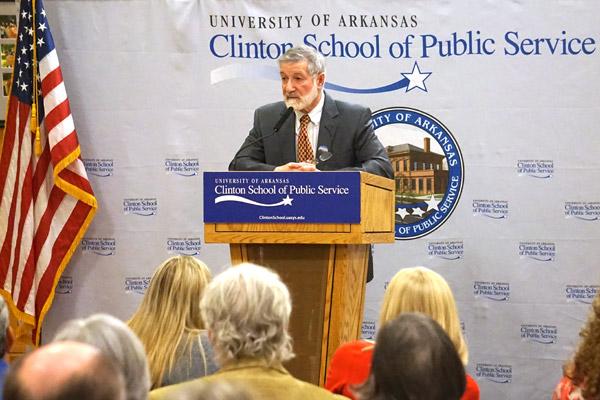 Aprille Hanson
Dr. Ira Helfand, Nobel laureate, speaks March 2 at the Clinton School of Public Service on the dangers of nuclear weapons. He was a guest of Pax Christi Little Rock.

Aprille Hanson
Dr. Ira Helfand, Nobel laureate, speaks March 2 at the Clinton School of Public Service on the dangers of nuclear weapons. He was a guest of Pax Christi Little Rock.

While an outbreak of a virus spreads globally and national issues like health care are being debated, Nobel laureate Dr. Ira Helfand said the “most important issue in the world today” that could take out the human race is something that most people do not think about: nuclear weapons.

“One hundred years from now, if our civilization has not destroyed itself, our descendants are only going to care about two things — do we stop climate change and do we prevent nuclear war?” Helfand said in an interview with Arkansas Catholic ahead of his presentation on nuclear disarmament as a guest of Catholic social justice group Pax Christi Little Rock March 2.

Helfand, who practices internal medicine in Massachusetts, now working at an urgent care center, is co-president of International Physicians for the Prevention of Nuclear War (IPPNW) and a member of the international steering group for the International Campaign to Abolish Nuclear Weapons (ICAN), that each won Nobel Peace Prizes in 1985 and 2017, respectively. He spoke to a crowd of about 80 people at the Clinton School of Public Service.

Though not practicing, Helfand said he is deeply influenced by his Jewish faith tradition, recalling the creation story. He said the idea of God giving man “dominion over the earth” has been misinterpreted.

“It’s a mandate to preserve and protect the creation that God made,” he said. “We need to take that mandate, that responsibility seriously. We are not at this point.”

There’s a myth that since the Cold War ended in the 1980s, nuclear weapons were no longer a threat. However, there are 14,500 nuclear weapons in the world today with more than 90 percent belonging to Russia and the United States. Others include the United Kingdom, France, Israel, Pakistan, India, China and North Korea.

In addition to threats between the U.S. and Russia, China, North Korea and Iran, conflict between India and Pakistan is the “most dangerous” right now, he said. Since gaining independence in the late 1940s, the countries have fought four wars.

He pointed to a 2006 study updated in 2019 that details the catastrophic events of a nuclear war between India and Pakistan — killing 75 to 125 million people in a week, 15 to 35 million tons of soot put into the upper atmosphere that would block the sun, causing global climate disruption and triggering a famine that would kill billions.

“It would not just be something that affected people in south Asia. It’s something that would destroy our lives here in the United States. Our economy would collapse, our people would go hungry. That’s a limited war involving something like a half of a percent of the world’s nuclear arsenals,” he said.

The bombs used in World War II on Hiroshima and Nagasaki were 15 kiloton bombs, with bombs today 10 to 50 times more powerful.

“This is the danger we’re living with every single day,” Helfand said.

WHAT THE FAITHFUL CAN DO

Historically, Helfand said people of faith have led the charge in peace and nuclear disarmament movements. In 1963, Pope John Paul II released his encyclical “Pacem in Terris” calling nuclear warfare unacceptable and for a commitment to disarmament.

Pope Francis took it a step further in November after visiting Hiroshima, calling the use of atomic energy for war “immoral” and saying the immorality of its use or possession should be in the Catechism of the Catholic Church, according to Catholic News Service.

Individuals can sign up for the Back from the Brink Campaign, preventnuclearwar.org, a grassroots movement working toward a national consensus to influence national policy about the abolition of nuclear weapons.

“I think exactly what Dr. Helfand says, to get involved on a local level you have to first create a knowledge base, learn more about what’s happening with nuclear weapons and nuclear disarmament movements,” said Dr. Sherry Simon, Pax Christi Little Rock president.

Lee Bass, a board member of Pax Christi Little Rock and parishioner with his wife Agnes at Our Lady of the Holy Souls Church in Little Rock, said while working with the Corps of Engineers, he helped disassemble the 17 nuclear silos in the state. Agnes Bass said of the presentation, “I immediately thought of my grandchildren. As he kept talking, I realized I knew nothing about what a nuclear war would cause, how many people would be destroyed immediately and how it affects our climate. Quite frankly, it scared me to death.”

Pax Christi Little Rock board member Sandee Haslauer, a member of Christ the King Church in Little Rock said, “It’s a manmade issue and men need to fix it, but we can only do it with the grace of God. Prayer is the answer,” she said.

Helfand encouraged people in church ministries, civic, professional and trade organizations to join the Back from the Brink effort as a group.

“If you know the entire planet is at risk, you can’t ignore it,” he said.