Absence of Mass a time for other spiritual connections, solidarity with universal Church 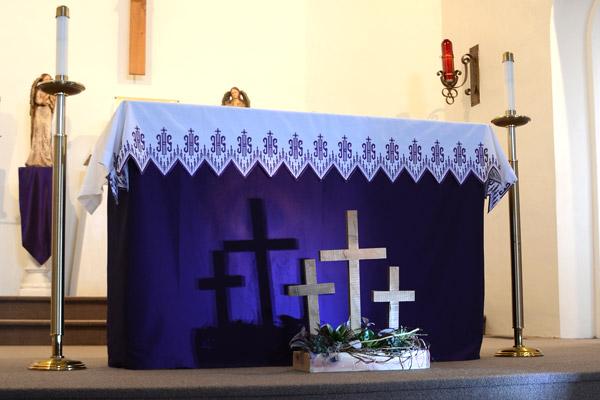 Paul McGuyer, Arkansas Catholic file
Sacred Heart Church in Charleston, seen here in 2017, will be quiet like most parishes in the Diocese of Little Rock at least through April 30, but Catholics have other ways to feed their faith during this time.

Paul McGuyer, Arkansas Catholic file
Sacred Heart Church in Charleston, seen here in 2017, will be quiet like most parishes in the Diocese of Little Rock at least through April 30, but Catholics have other ways to feed their faith during this time.

An Act of Spiritual Communion

I believe that you

are present in the Most Holy Sacrament.

I love you above all things,

and I desire to receive you into my soul.

Since I cannot at this moment

come at least spiritually into my heart.

I embrace you as if you were already there and unite myself wholly to you. Never permit me to be separated from you.

Father Erik Pohlmeier, director of faith formation for the Diocese of Little Rock, pastor of Christ the King Church in Little Rock and the theological consultant for Arkansas Catholic, responded to questions surrounding Bishop Anthony B. Taylor’s mandate regarding COVID-19.

Regular Mass attendees are very concerned about not receiving the Eucharist. What would you say to these Catholics?
It is a time for us to deepen our understanding of what the Mass is. Because I think too often, people think about the Mass only in terms of, “Do I receive Communion or not?” And the Mass is more than that. We call it the sacrifice of the Mass not because people receive Communion, but because the heart of the Mass is the offering of the Son to the Father. The offering of Jesus for our sins, so it’s the Pascal Mystery. It’s what Jesus did by his death and resurrection being offered for us. So that’s the heart of the Mass and that happens whether you receive the Eucharist or not and our salvation depends on that. Our salvation depends on the offering of the Son to the Father. And so every time we participate in Mass, we participate in that. I think that’s important to understand because receiving the Eucharist is extremely important, but the Mass has value even when that is not happening. Which is why we encourage people who can’t receive Communion to still go to Mass. You’re participating in the celebration of the Mass because it would be through that media (on television or online), it would be live streaming, so you’re still participating in it as it’s happening.

Though most have access to live streaming a Mass or watching a Mass on TV, what about people who don’t?

We also have the practice of Spiritual Communion and there’s a specific prayer called the Spiritual Communion (see sidebar). And if you read it, you see it talks about “because I can’t receive the Eucharist, I unite myself spiritually in communion with you” and the Church has long had that prayer and it’s meant to be for special occasions.

How does this connect us to the Universal Church?
I would say is it’s a chance for us to really reflect and to try to get the broader view of the Church and the broader view of God because while this is hard for us and this is new for us, this is actually a reality for many, many people in the world all the time. There are millions of faithful Catholics who rarely have the chance to receive Communion. While we certainly wish to resolve that, the fact is, there are lots of people who continue growing in their faith and become examples of their faith even when they don’t have access to the Eucharist.

What are some ways Catholics can still observe Lent under this mandate?
Much of what happens during Lent is your personal commitment anyway. The social things will be canceled; the spiritual things mostly you can do on your own. The Stations of the Cross can be prayed on your own. Most of the practices of Lent, except for Mass, already happen on your own so it can be a deepening of those. One of the ways I’d always recommend to people to connect with Lent is to connect with the liturgical calendar. I think it can be a renewed call to read the readings every day. You can even access the prayers that go with Mass for every day. So it’s a chance in prayer to deepen our understanding of all those things.

I would say it’s a time in our prayer, a question I would recommend for people’s prayer, is to really reflect on, “What do I hunger for?” My hope would be that we would become more aware of our hunger for God and have greater anticipation for when that’s available again.

What kind of changes do you foresee parishes making for RCIA meetings?
RCIA is almost finished already. Christ the King, for example, we only have one more scheduled class because spring break is also in there and most places cancel during spring break so we’re canceling the one class we have left. The bishop’s information talked about continuing to highlight the people in RCIA for the Triduum. Because of when this is happening, it really shouldn’t change much for them.

Despite no public Masses being celebrated, Catholics can still honor a weekly observance. Besides watching or streaming a Mass, what are some things the faithful can do?
One of the great needs of our time is for families to come together to share faith. I think this is a unique opportunity for families because not only is Mass canceled, but schools are closed and all the extra activities are canceled. Families are going to have an opportunity for time together that they don’t normally have. And what is most needed for the passing on of faith in our world is for the families to become domestic churches, for the families to become where the faith is passed onto children. So now what we have is an opportunity to give some attention to that.

So my recommendation for anyone with children in the home is to commit that time to coming together. It may work out that they can watch Mass together, but then also that they can turn it into a discussion among themselves about the readings, they can pray additional prayers together. ...

And those without families — traditions like praying the rosary and reading the Bible could be increased?
These are necessary things that often get overlooked. It’s not just these are nice things you could do, these are things that should be happening that we often don’t have time for. Now we should take advantage of that fact that we do.

What are some ways they can still observe Holy Week and Easter?
Holy Week can be a time where we go that extra mile and again, once you think about the church services and Mass beyond “I receive Communion,” then you can be fully in step with what’s going on in those celebrations. You can read the Passion. A family could have a washing of the feet, they can do that in their home for each other. And then, of course, the bishop is asking that while Mass be suspended, that churches remain open for prayer. So there would be the opportunity for people to still come and pray.

Lent is a time where we observe Jesus’ 40 days in the desert. We are now experiencing our own version of a desert. What can the faithful do to make their suffering connected to others in the Church who experience this?
Again I emphasize we should broaden our understanding of being part of the Church. And that many of our brothers and sisters suffer these realities every day and will continue even after we start going back to Mass. The whole notion of solidarity, we are suffering with for a short time; and if we come out of that with a greater compassion for people then that has helped us. And it can help us in a way that simply wouldn’t happen if it wasn’t for this.

I think of some of our most heroic people. The example that keeps coming to my mind was the far worse situation of people in Nazi Germany and how many Catholics suffered in the concentration camps and had things forcibly removed from them, but our most heroic people are heroic because their response was not to focus on what they wish was the situation, but to focus on God present in this situation. And when we make that shift it brings us back to unity with the Church, with the bishop. But if we spend all our time complaining about what shouldn’t be, then we’re allowing the devil to divide us from our own Church.

An Act of Spiritual Communion

I believe that you

are present in the Most Holy Sacrament.

I love you above all things,

and I desire to receive you into my soul.

Since I cannot at this moment

come at least spiritually into my heart.

I embrace you as if you were already there and unite myself wholly to you. Never permit me to be separated from you.

Why I am becoming Catholic: faithful share their stories

Christ in the midst of COVID-19