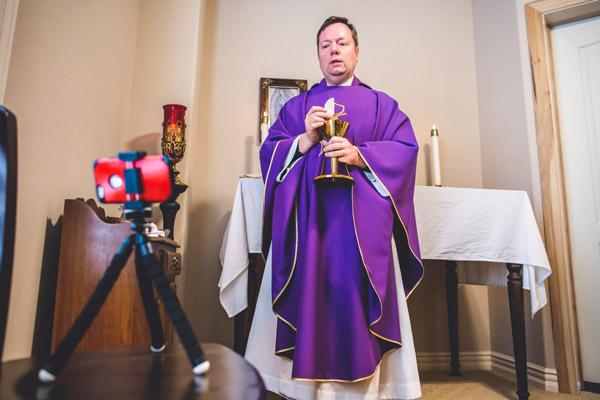 Travis McAfee
Father Jason Tyler’s smartphone and tripod help him produce Facebook Live videos daily to celebrate Mass for his parishioners and friends. He is seen here March 18 livestreaming from his rectory chapel.

Travis McAfee
Father Jason Tyler’s smartphone and tripod help him produce Facebook Live videos daily to celebrate Mass for his parishioners and friends. He is seen here March 18 livestreaming from his rectory chapel.

Click here to find out when Masses are streaming in the Diocese of Little Rock.

Living with the threat of COVID-19 spread is surreal, almost like the plot to the next blockbuster movie as daily schedules are upended by the ever-growing list of shutdowns and cancellations.

Social media has called it “apocalyptic” to even making some light-hearted predictions — as one user said, given the lack of sports and other activities, the boom of babies born nine months from now could be called “coronials.”

For Catholics, Father Jason Tyler in Fayetteville defined it best — the Covidic Time.

“That was something I came up with just in terms of how we describe this situation. Some people are calling it quarantine and isolation,” public health terms that don’t necessarily apply to all, he explained. Since it rhymes with King David, it’s a play off of the Davidic kingdom. “This is Covidic Time because it’s unusual — people are not going to work, children aren’t going to school, things are canceled; the whole feeling of time is different in a way.”

During Covidic Time, Catholics are learning the art of physical distancing, while maintaining faith-filled connections through technology and family bonding.

On March 15, 5-year-old Faith Denefe excitedly set up for a mini “liturgy,” setting up a standing crucifix on the table, pillows on the floor for kneelers — her idea — and bringing a picture of Jesus she had stashed in her room, said her mom Sam Denefe of North Little Rock.

The family of four, including dad Matt and son Eli, 2, settled in to share the day’s Scripture readings with the lights turned low and candles lit. As dad played drums and mom played guitar, the kids sang the responsorial psalm “much louder than they do at church,” Sam said, and Matt read the Gospel. After another song of their choosing and the prayer of spiritual Communion, “we said, ‘Amen’ and blew out the candles.” The couple later listened to a homily by Bishop Robert Barron.

It wasn’t the same, but as Faith told her mother, “church is pretty cool.”

“I’m definitely upset not to have the Eucharist,” Samantha Denefe said, who is uniquely aware of the need to slow the virus as she is pregnant and her husband is an emergency room doctor in residency. “I think some things you can do is make sure Church and the Eucharist is still the center of your life …  just because you can’t go and receive doesn’t mean you can’t have that conversation with your kids.”

In addition to having children set the scene for “Mass,” Denefe said searching for ideas on Pinterest for Lenten activities can help create a structured bonding activity.

“God did not cause this to make everything slow down, but if we’re going to make lemonade out of lemons, let’s prioritize how important family is,” she said.

Just because public Masses are canceled does not mean they are not happening. Several priests are streaming Masses on their parish Facebook page or YouTube channel (see related story here), giving the faithful a familiar face in this time of isolation.

Father Tyler, pastor of St. Joseph Church in Fayetteville, Sts. Peter and Paul Church in Lincoln and St. John the Evangelist Church in Huntsville, is live streaming two weekend Masses from St. Joseph via Livestream.com. In addition, he is recording daily Masses through Facebook Live on his personal page, along with daily 10-minute reflections on different topics including adoration, Catholic resources, confession and recording what a confessional looks like for those who haven’t been in a while and answering the question, “Is Lent canceled?”

While the answer is no, another Lenten fast instead of fasting from social media or the internet may need to be picked in order to stay connected to the faith. A recent daily Mass with Father Tyler showed 65 people watching it live.

“It’s really touching,” he said of people tuning in. “Most people are sort of hunkered down with their families. For a priest, our family is really our parish, the people we’re called to minister to. As a priest, I’m hunkered down away from my family, so what I’m doing online is to keep that connection.”

While society is slowing, it can’t stop entirely. As many colleges have, the University of Central Arkansas and Hendrix College, both in Conway, switched to online instruction for the remainder of the semester, leaving about 200 students who interact with the CCM ministry to either stay isolated in their dorms or return home and be disconnected from their peers.

“I think we’re really cognizant of the loss of community, but still having the same social pressures of school,” said campus minister Kasey Miller. “… This is a very uncertain time. I’ve noticed it has triggered a lot of anxiety and having conflicting news reports and different levels of panicking. Even if students aren’t panicking, the more we can connect them to each other and return to some sense of normalcy I think would help reduce some of those anxieties and fears.”

Carrie Montemayor, adult faith formation coordinator at St. Joseph Church in Fayetteville, said the 23 candidates and elect in RCIA will still receive faith building through Flocknote along with discussion and links to the week’s lesson available on formed.com.

While Erin Pohlmeier along her husband Jason, principal at St. Joseph School in Fayetteville, tend to their six children at home, she is staying connected to her faith study book club and the RCIA candidate she is sponsoring.

“We know in Scripture Jesus sent out his disciples two by two, we still need people to help us when we’re struggling and bring us back to the truth,” she said, adding, “… We’re so blessed to live in an age of technology discipleship.”

Click here to find out when Masses are streaming in the Diocese of Little Rock.