Leaning on God, volunteering helped these women find a new purpose beyond their addiction 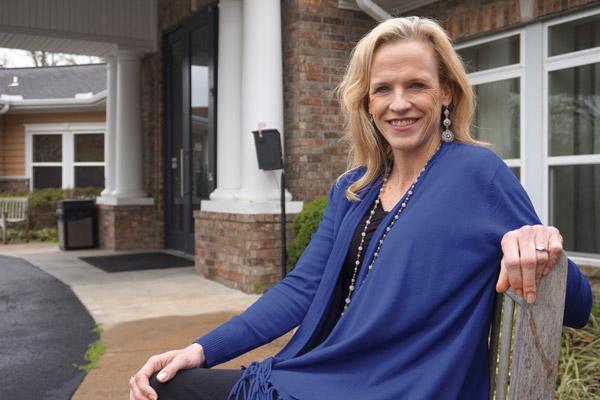 Aprille Hanson
Kelly Marschewski Lasseigne sits in front of the 20th Century Club Lodge in Little Rock where she volunteers serving meals to cancer patients. She began volunteering after receiving treatment for alcoholism.

Aprille Hanson
Kelly Marschewski Lasseigne sits in front of the 20th Century Club Lodge in Little Rock where she volunteers serving meals to cancer patients. She began volunteering after receiving treatment for alcoholism.

Kelly Marschewski Lasseigne came home late one night, dancing around her home, setting off the burglar alarm. She had at least three to four beers with friends, a couple of martinis, possibly a shot or two. The memory of that night is fuzzy. She doesn’t remember the Uber ride home or coming inside. What she does remember is the fear it caused her children and husband.

Cheryl, who preferred to not use her real name, had been down the road of sobriety before. But without thinking, she took a triple shot of vodka offered to her. She then got behind the wheel with her two sons, picking them up from Riverfest, a music festival in downtown Little Rock. A state trooper stopped her for speeding and though she wasn’t “drunk, drunk,” she was taken to the police station. Charged with a DWI, it was her lowest point.

“You know what God does for you? He has you get pulled over for speeding.” Cheryl (not her real name), a recovering alcoholic

These dates mark the moment these women chose to turn their lives around with the help of recovery programs and God.

In the United States, an estimated 88,000 people annually die of alcohol-related deaths, the third cause of preventable death in the country, according to the National Institute on Alcohol Abuse and Alcoholism.

“We’re all sinners in some way, shape or form. You have to get to that point to know Jesus is going to love you regardless,” Lasseigne said. “… There are people that do judge me for it, but at the end of the day, I know he does not judge me for it. I think that’s what people of faith have to realize.”

The NIAAA defines alcohol use disorder, AUD, as a “chronic relapsing brain disease characterized by an impaired ability to stop or control alcohol use despite adverse social, occupational or health consequences.”

Dr. George Simon, a clinical psychologist in Little Rock and member of Christ the King Church in Little Rock, said people who get help for their addictions typically have a classic “hitting bottom” experience or enough benign confrontations from loved ones, also considered an intervention, that can help a person break down the walls of denial.

While addictions, including alcoholism, are considered brain disorders, programs like Alcoholics Anonymous, a proven 12-step program that began around 1935 that parallels Ignatian Spiritual Exercises, actually do help those who attend. More than a million people are estimated to have regularly attended AA, though the anonymous organization does not keep records.

“As strange as it is, even though the disease is physical and even though the ultimate goal is restoring proper brain chemistry, there’s great merit to the spiritual character development,” Simon said. “I know most of the folks that successfully work the program come out better for it.”

Binge drinking for men means five or more drinks on one occasion and four or more drinks for women, according to the U.S. Centers for Disease Control and Prevention.

According to a 2015 CDC study, Arkansans who binge drink consume the most drinks annually with 841 drinks per year, making it the top state for intensity of binge drinking among adults. Mississippi is second with 831.8. This is despite the fact that almost half of the 75 counties in the state are dry.

While the average binge drinker has seven drinks per binge at least once a week, those in Arkansas consume 8.3 drinks during a binge, as KATV reported on the study in 2018.

Recently, Cheryl was called a religious fanatic. At one point in her life, that characterization would have set her off. But today, it’s not a far-off stereotype — the Catholic convert is a lector, eucharistic minister and attends a Bible study.

“I said thank you,” wearing that title with honor.

She grew up Baptist and was always at the church. After the love she found with a high school boyfriend went south, addictions took over. In the years that followed, it led to three marriages, the first peppered with abuse, and down the rabbit hole with drugs and alcohol.

“For about a year and half, I was just going to parties all the time where there was cocaine, meth, crystal is what we always referred to at that time, I’d just do whatever I could get my hands on. Acid,” she said. “ … I loved marijuana. I smoked it all the time, nobody knew me not being high.”

When her first child was born, he had a sucking and swallowing problem, likely related to her meth use during the last month of pregnancy, she said.

After about 10 years of drug abuse, she turned to alcohol because it was legal. She was drinking three bottles of vodka a day, “straight up, don’t mix it, out of the freezer.”

“I wouldn’t have lasted much longer at that pace. AA saved my life. AA to me is God. God is everything,” Cheryl said.

“For me, going to the first meeting was looking at the 12 steps that were up on the wall and thinking this is easy, I got this, 1, 2, 3. Check them off, like the self-check-out at the store … I can take care of it myself. I’m very self-reliant; it’s hard to ask for help, which is why the second meeting is so hard,” she said.

After her then-husband took their child, hoping to gain full custody, she submerged herself in the program after her second AA meeting Sept. 13, 2006.

She relapsed after a few months. Her lowest point was in 2010 when she received her DWI.

“You know what God does for you? He has you get pulled over for speeding,” she said.

Her sobriety led to her conversion to Catholicism, a healthy marriage and being an active participant in Calix Society of Central Arkansas, a Catholic ministry sponsored by the Diocese of Little Rock.

Though not a replacement for a 12-step program like AA, Cheryl said anyone suffering from addiction, no matter the stage, can find fulfillment in Calix.

“It provides a way for me to talk about God and that Jesus is my answer. That is not something that’s talked about really open in any other program. In Calix, it’s an extension of growing your spirituality and expanding on that,” she said. Meetings are formatted with topics to reflect on and share.

“You can pray all day long, but if you’re praying, ‘God help me not drink today’ or ‘If you do this I won’t drink anymore,’” that won’t stop the addiction, she said. “Nothing happens without action … It’s not that God is not there for you, but you don’t see that because God is blocked” by the addictive substance.

It is why that no matter the amount of faith, a person with an addiction should seek recovery.

“You need to be around people that understand and not somebody that looks at you constantly telling you you can control it. ‘Can’t you see what’s wrong with you? You should be able to not drink so much,’” she said. “You immediately feel at home” in recovery.

‘Reach out to somebody’

From the outside looking in, Lasseigne had it together. The married mother of two was devoted to her faith, attending Christ the King Church in Little Rock. She had a proud history of Catholicism, with her late father, Deacon John Marchewski, serving as the minister to deacons for the Diocese of Little Rock. He died of pancreatic cancer Feb. 5, 2015.

Despite the fact that her father was a recovering alcoholic, something he was open about, outsiders wouldn’t have guessed that Lasseigne suffered the same addiction.

“I wasn’t showing up drunk in the school pick-up line … that was not my journey or how I was,” she said.

However, after drinking in college, the cycle continued.

“(I was a) beer drinker. If I would go hard, vodka. I would drink martinis, I would do shots. I didn’t like wine. I didn’t like the way it made me feel,” she said. “… It was not an everyday thing. I could go two weeks and not drink.”

Because it was not constant, “in my mind, it wasn’t a problem.” But when she would drink, she couldn’t stop. If she was out with friends, it was easily three to four drinks and always end up with shots. Sitting at home, she could polish off six beers and a shot.

She felt the stress of isolation as her oldest daughter, who has high-functioning Asperger’s syndrome, struggled socially despite high grades. Today, her daughter is thriving at Mount St. Mary Academy.

“It puts you in isolation because no parent truly understands when your child is hurting and struggling socially,” Lasseigne said, adding that as a stay-at-home mom, it was “kids, kids, kids all the time” then the shame of thinking that way, when others would say how lucky she was to be home with her children. “You’re definitely isolated.”

After her early 2019 incident of coming home drunk, she went through recovery.

“Just like any situation as a Christian, it truly is day to day. You can’t beat yourself up for the past,” she said.

Her faith influenced her sobriety. She has made more time to pray each day, lector at Mass and read the Scriptures. Throwing herself into service, she volunteers at the 20th Century Club Lodge, serving dinner to cancer patients and their caregivers.

“It has really kind of helped put things in perspective for me,” she said.

It has changed the way Lasseigne spends time with her friends. Instead of 5 p.m. happy hour, they may go out for an afternoon coffee or go to a movie. Around the time of her sobriety, she and a best friend attended a Justin Timberlake concert.

“Whether it was a concert, a dinner or whatever, I had to have a drink,” she said, but realized after not drinking at the concert, “I can do this. I can still have fun in my life … You just have to be able to find the right people and it helps to have a supportive family.”

Lasseigne said she hopes her story helps others realize they are not alone.

“Reach out to somebody, anybody, even me. Reach out to somebody and ask for help. People love you and want to help you. Talk to your priest. Talk to somebody,” she said. “There are support groups for them for any kind of addiction. There are plenty of resources. They just need to reach out. They need to acknowledge they have a problem, that’s the key.”