At end of their ropes, religious say they found God there, help in recovery 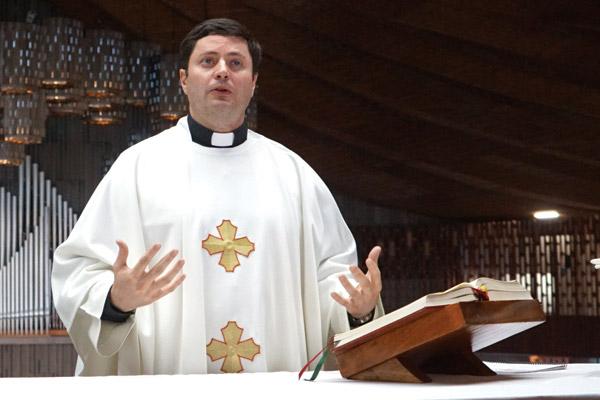 Malea Hargett
Father Tony Robbins celebrates Mass Feb. 12 in a chapel at the Basilica of Our Lady of Guadalupe during an Arkansas Catholic-sponsored pilgrimage to Mexico City.

Malea Hargett
Father Tony Robbins celebrates Mass Feb. 12 in a chapel at the Basilica of Our Lady of Guadalupe during an Arkansas Catholic-sponsored pilgrimage to Mexico City.

One priest said his rock bottom moment came after eating pot — not baked, but straight marijuana. Before he was a Benedictine, this monk passed out drunk after turning on his stove, causing the fire department to knock down his door.

Another priest confessed he did not have a “fall off the altar” moment, but it was the steady stream of vodka that controlled his life.

Each has walked the road to recovery, before and during their calls to religious life, and found a new high — the grace of God. Part of that grace means sharing their stories in hopes that others who suffer from addictions will know God’s mercy is endless.

“Sometimes people think we’re supermen. We’re very much like everybody else, even when we’re ordained,” said Father Norbert Rappold, 58, pastor at St. Peter the Fisherman Church in Mountain Home. “… I see now where a lot of my own brokenness and the way I had to learn from it, or not learn from it and pay the price, through all of that find the mercy, love and healing in that relationship with God. If alcoholism is going to be a hush-hush thing, then no one can speak out about.”

“It’s a surrender to the admission of our own inability to have any kind of control in life. What we realize is we can’t control life, but we can control how we respond to it.” Father Tony Robbins

Giving into peer pressure, Father Tony Robbins, 41, pastor of St. Joseph Church in Conway, began sneaking beers out to the woods from his grandmother’s refrigerator around 12 years old. Then dipping tobacco at 14, smoking cigarettes around 16. He then turned to smoking marijuana and pornography.

“It really did hurt me and my ability to be able to relate to other people at a young age so I would have to drink to numb my anxiety about that,” Father Robbins said of pornography.

Alcohol and drugs became a part of social interactions. As a teenager, Brother Irenaeus Petree, 44, of Subiaco Abbey, was a wallflower. Too “shy and awkward” to dance at parties, the introverted kid turned to alcohol. He first got drunk at 15.

“It seemed to me they go hand in hand. Almost to the point where you associate having fun with that sense of alleviation with alcohol,” the Missouri native said.

Father Rappold was a relatively good kid. He graduated from Arkansas Tech in Russellville in 1984 and worked as a farm manager and later in construction. He owned a lawn care business.

“For me, I just kind of eased into” drinking after college, he said. “Things picked up more. On the weekends, you didn’t have to go to work until Monday. There was a new freedom, where in college you had to study a lot of times. That’s where the alcohol, the parties intensified. But I still saw my responsibility of holding down a job.”

Father Rappold entered the seminary and his drinking stayed about the same, more social.

“All alcoholics, we think it’s manageable … Alcoholism is an invisible line. Something that you don’t know where the line is and you step across it and it’s too late,” he said.

Similar to sin, with an addiction, the brain is rewired to “minimalize, rationalize and legitimize” the addiction until it seems OK, Father Rappold said, the devil mixing with the physiology of addictions.

Father Robbins was expelled from Catholic High School in Little Rock after he was caught smoking, a moment that “crushed” him. Attending Santa Fe Community College in New Mexico gave him the freedom to smoke marijuana daily and he soon withdrew from classes.

“What I liked about it was the feeling it gave me, the high. But it quickly became you had to smoke just to feel normal. That’s the nature of addiction, you build up that tolerance,” Father Robbins said.

After a close run-in with the police, Father Robbins turned to prayer and revisited the calling to the priesthood he felt since childhood. However, lonely, he returned to his addictions, living a “double life” between serving as a Eucharistic minister and partying.

“Someone who had known me before was like, ‘Hey man, I heard you’re wanting to be a priest. What are you going to do? Like get up on the pulpit and tell everyone to smoke weed because it’ll make you feel higher and closer to God?’ It was kind of funny, but the way that I received that was this guy is right; I have no business to be thinking about the priesthood, that God could be calling me. I became so angry with myself for even considering it,” he said.

Brother Irenaeus’ drinking only intensified as he grew up. Afraid the hard liquor was damaging his liver quicker, he turned to wine, drinking about two bottles a day.

“A lot of times it seemed I drank all the time. It made you feel so good, you’re happy, giddy. I would say life in general, it just always had this dark cloud hanging over it like Eeyore,” Brother Irenaeus said.

After working entry-level jobs, he worked for the State of Missouri, but was periodically was fired from jobs when his drinking became out of control.

Brother Irenaeus said he’d black out, once when he started to cook something on his stove.

Ordained in 1999, Father Rappold never felt isolated, even in smaller assignments like St. Agnes Church in Mena, unafraid to go socialize with parishioners.

“As a priest alone in the rectory, you’ve got a lot of freedom. That’s, in a way, I think why some priests get in trouble. That’s kind of where I started easing into a drink. A snort won’t hurt,” he said. “I was a maintenance drinker, an IV drinker, a little bit all day long. It became vodka. For a while there it was wine. Vodka is a little easier to hide. I remember I didn’t want anyone to know I was drinking, I didn’t want to be drunk.”

Trying to give up alcohol for Lent, Father Rappold “realized I had another God. And that scared me.”

“One time my therapist asked when you started getting low on alcohol kind of what would happen? I’d begin to realize I would decide I need to go visit this parishioner on the county line; they’re only 15, 20 minutes from the liquor store … well, I’m kind of low,” he said.

Father Robbins said he remembers the moment he let go of God, feeling God’s spirit leave him in a drugged out state. Before ingesting marijuana, he heard a voice say “The Body of Christ,” but ate it anyway.

Father Robbins later stepped outside, apologizing to God for “wrecking this life that you’ve given me.” He felt his spirit come back.

“I went to bed that night accepting that he’s going make a saint out of me … then I went through hell because of the withdrawals.”

“We do need to derive some inner strength and that comes from God who is within us,” he said of people with addictions. “But at the same time, it’s a surrender to the admission of our own inability to have any kind of control in life. What we realize is we can’t control life, but we can control how we respond to it.”

He quit drinking in seminary, but after his father’s death in 2011, he handled the grief and isolation in his assignment at Magnolia and Camden with alcohol.

“I see a lot of people dealing with loss and trying to deal with it myself, I got really angry. Having to bury people when I was down there, and I’m still having to grieve the loss of my dad, it was very challenging,” he said, receiving help from Dr. George Simon, clinical psychologist in Little Rock.

Around the anniversary of his father’s death, Father Robbins focuses on prayer, taking a walk and talking to his family to battle depression.

Brother Irenaeus’ life turned around when at 35 years old, his family staged an intervention and he received in-patient treatment after previous attempts at recovery didn’t stick. He has been sober since May 2012. In his sobriety, he entered Subiaco Abbey, making his final profession as a monk last year.

“There were at times I just knew, a prolonged period of time, I knew if I died I’d go to hell,” he said, adding it wasn’t so much guilt, but a reminder. “As long as I had that faith there was always hope, even if it was a glimmer in the distance.”

At Mass, he receives only the Body of Christ.

At a time when Father Rappold was burnt out, depressed and scared, then Bishop J. Peter Sartain called him for a meeting. A parishioner had smelled alcohol on him. Father Rappold opted for an out-of-state in-patient rehab center for priests, religious and deacons for about three months.

Treatment allowed him to learn about his strengths and weaknesses and how to deal with them in a healthy way. He reinstituted his prayer life, regularly goes to confession and realized that priests can have boundaries, not always having to pick up the phone at 11 p.m. if it’s a non-emergency.

“I guess just learning about your disease, understanding it and identifying it more when you need to pull back or when you may need to go talk to somebody and not being afraid anymore,” he said.

Father Rappold has been sober since Feb. 6, 2006, and has been open about his addiction in his homilies and with parishioners in crisis.

While it was a dark time for him, it’s one he never wants to forget.

“It helps me remind myself of who I am and what I am, it helps others to find the hope … If it’s always hidden, how can you help anybody?” Father Rappold said.

Flying priest ready to share his hobby with parishioners