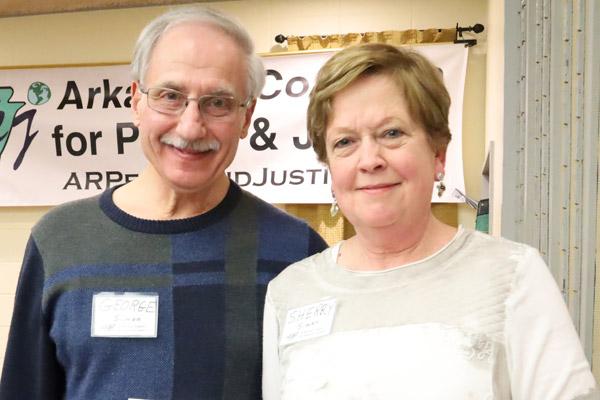 Susej Thompson, pastoral music director at Our Lady of the Holy Souls Church in Little Rock, shares her journey living with a husband with an addiction on the newest episode of Arkansas Catholic Asks at arkansas-catholic.org/publications/podcast. You can also find it anywhere you listen to podcasts, including Apple, Google and Spotify.

For someone who does not suffer from an addiction, understanding why a person cannot simply quit harming themselves on their own can be confusing and infuriating.

According to the 2018 National Survey on Drug Use and Health through the federal agency Substance Abuse and Mental Health Services Administration, approximately 20.3 million people 12 or older had a substance use disorder, with alcohol or illicit drugs.

Drs. George and Sherry Simon, clinical psychologists in Little Rock since 1986 and members of Christ the King Church, said there is a hereditary predisposition to addiction, but individuals with no family history of addictive behavior can also fall victim to the brain being rewired to a substance or behavior. Addictions are not character weaknesses.

Once a person builds up a tolerance “structural changes occur with the ability to experience pain and pleasure,” Sherry Simon said, and more is needed to achieve the same high.

Often, it’s called a dual diagnosis, with addictions and mental health. Sherry Simon said patients tend to self-medicate depression or anxiety. The NSDUH survey revealed about 9.2 million adults 18 and older had both a mental illness and substance use disorder in 2018.

Addictions are often only seen as a problem when vocational, social and relational or health issues surface. By that point, a habit has formed.

There are warning signs, depending on the addiction. For example, with opioid addiction, a person may experience a loss of interest in activities, sleep a lot, begin to have more physical illnesses as the drugs affect their immune system and general hygiene can suffer.

“I think it is very easy to deny it when you say, ‘Well, I fell off a ladder and hurt my back and my doctor prescribed me some pain pills, what’s wrong with that?’ Except you’re still using them, five times higher dosage, four years later. That’s a problem,” Sherry Simon said.

People who suffer from addictions generally receive help after a classic “hitting bottom” experience or an intervention.

“When folks don’t know themselves that things absolutely must change or they’re going to die … it’s a much harder road to recovery,” George Simon said.

Sherry Simon said it’s “a huge mistake” to get angry or punitive toward someone with an addiction, but to approach them with love and honesty.

“You don’t have to go to their house every day and hit them over the head with it but whenever you see there’s an opportunity, ‘Well, you know this is what we were talking about the other day, you’re having this problem and I wonder if it could be related to this.’ So it’s holding it in front of them kindly,” she said. “It makes all the difference in the world when they believe that they can trust you and that you love them enough and you don’t want harm for them. So they learn to trust what you’re telling them and then over time it may make a difference.”

It’s also important to remember that an addiction is not a problem with someone’s character or will power. This can be especially tough for people of faith to accept.

“‘If I pray hard enough, God will be able to help me get rid of this problem’ and yet it doesn’t happen that way and so then … I think people come to a crisis of faith,” Sherry Simon said, which can lead to “depression, low self-esteem, ‘I can’t even be a good Christian.’ Oh yeah, people go down the tubes. It’s a vicious cycle.”

Even though addiction is a brain disorder, 12-step recovery programs that focus on building up a person’s character, like Alcoholics Anonymous, that parallels Ignatian Spiritual Exercises, have proven to be life changing.

“It turns out that spiritual and moral character does go a long way toward helping us be immune to a lot of things,” George Simon said.

Susej Thompson, pastoral music director at Our Lady of the Holy Souls Church in Little Rock, shares her journey living with a husband with an addiction on the newest episode of Arkansas Catholic Asks at arkansas-catholic.org/publications/podcast. You can also find it anywhere you listen to podcasts, including Apple, Google and Spotify.