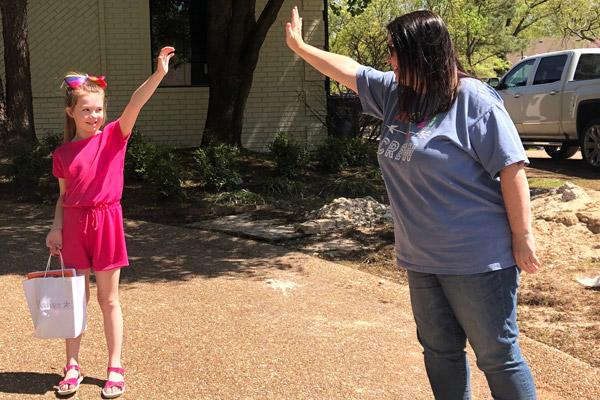 Tips for schooling at home

Click here to read tips on schooling at home from a former homeschool parent.

At 8:20 a.m. every weekday, four Pohlmeier children from St. Joseph School in Fayetteville — Isaac, 13, Clare, 12, Dominic, 9 and Vincent, 7 — lead the morning prayers for their fellow classmates. It is the way the school typically starts each morning, rotating among their student body. On Wednesdays, it’s the Stations of the Cross.

While the same commitment to their faith is there, the student body is watching on the school’s Facebook page. Since March 16, all Catholic schools in Arkansas switched to AMI (Alternative Methods of Instruction) to help slow the spread of COVID-19. It will last until at least April 17, when going back to the classrooms will be reevaluated.

This has thrust parents into being facilitators of their children’s education while at home and teachers adjusting their curriculum to make sure their students are still learning.

Their father Jason Pohlmeier, principal at St. Joseph School, and his wife Erin, said streaming the prayers is part of creating consistency for students.

“It’s obviously a challenge, and I think we’ve all got to realize this is different,” he said. “... As parents, we’re trying to have a schedule. It’s not just freewheeling, sleeping in and staying in your pajamas.”

A contract nurse in Little Rock, NeShon Lee’s schedule has fluctuated between early mornings to late overnight shifts, helping at drive-thru emergency rooms at places like Baptist Hospital to screen and swab patients testing for COVID-19. The single mother is also helping her son Payton Bradley, 13, a seventh-grade student at St. Theresa School in Little Rock, manage his schoolwork, thankfully with the help of her mother, who works with special needs children in the Little Rock School District. Lee said she keeps track of his work through memos and texts with his teacher Brittany Bailey.

“She’s very in tune with each student’s learning abilities, not just to mine,” Lee said, adding his teacher has also been checking in with students, letting them know their assignments through an app and that she misses them. “Her compassion just goes beyond amazing.”

Lee said St. Theresa School has been accommodating in this situation, as well as working on setting up the outsourced tele-therapy, typically done at the school, for those like her son, who has high-functioning autism. As much help as she’s received and even though she’s normally very involved in her son’s education, it’s still been a challenge.

“It was a quick reminder I did not go to school to be a teacher; how difficult teaching children really can be … I’ve been out of school way too long,” she said.

Though Lee said she understands the frustrations as a parent, from a medical standpoint, isolation and “social distancing” is crucial.

“It only takes one person to cough in an area with 10 people for it to spread. It’s just like a domino effect, if one hits, it’ll hit the next group … it’s only going to grow if we can’t contain it,” she said.

Gabby Valenzuela, 20, a parishioner of St. Theresa Church, has been helping her niece Stephanie, 6, a first grader at the school, with schoolwork in the morning while her brother — the child’s father — works. She then works on college assignments in the afternoon and night from Pulaski Tech in Little Rock between her job as a vet tech for a veterinarian clinic.

“Her teacher sent me all the work they’d be doing. For her, I kind of helped her spread out the paperwork,” Valenzuela said.

She suggested parents, “try to make it fun for children so it will be easy for them to learn.”

“I love spending time with her. I like teaching; ever since I was little, I played teacher, but I don’t want to become a teacher because I don’t have the patience,” she admitted, “but I love my niece and I do have patience with her.”

Erin Pohlmeier said the key to managing the schoolwork for her four school-age children is establishing schedules and keeping connected with other parents who might feel overwhelmed to offer support.

“Just be merciful and compassionate to ourselves as parents … We know God is going to provide, we just need to keep asking for it,” she said of his grace, adding, “just try to look at yourselves with mercy and compassion the way the Lord sees you.”

While there’s a temptation to look at the current isolation as “home schooling,” Jason Pohlmeier said it’s not the same. Home-school parents create lesson plans, choose curriculum for their individual child and provide instruction, while in the Catholic schools, teachers are still passing along the education, while parents facilitate.

“Teachers are still teachers, and parents are still parents,” he said, but added the learning curve has about been separating the concepts of schoolwork and homework.

Because the state still requires 178 days of instruction, the days have to be filled with a fruitful curriculum, with teachers “modifying the curriculum as little as possible,” but still finding ways to accommodate. For example, the school is looking at a drop-off/pickup system for schoolwork, with as little contact as possible, that will allow the younger children, who might not be as tech savvy, access to hard copies.

First grade teacher Mandy Becker, who has taught at Immaculate Conception School in Fort Smith for 12 years of her 21 years in education, is finding ways to connect to her students beyond the paper packets given to parents. She set up a private Facebook group for her families, where parents can chat and students can post videos or comment to their friends to keep that sense of community.

“I really miss my kids. I miss being in the classroom,” Becker said.

She plans to also Facetime with her students during the week. The students also plan on sending in prayer requests.

“The hard part is I do have parents who are working from home that have multiple kids they’re trying to work on assignments with, and I think that’s been very difficult for parents to manage,” Becker said. “... There’s a single mother, the daughter has to stay with her grandparents who don’t speak English” during the workday, so schoolwork isn’t able to be worked on with the mother until after 7 p.m.

In early March, before the COVID-19 virus shut down the schools, Immaculate Conception School became a pilot program for Amira Tutor, a program that has a virtual teacher recording the students reading and coaching them when they struggle. This is then shown to the teacher, Becker said, another way for her to stay connected. She and her co-teacher also dropped off school supplies and other possible project tools, from Play-Doh to Legos to 34 homes, 18 of which are her students, March 29. While she can’t interact with her children, the “bag of hugs” is a way to let them know she cares.

Computer teacher Morgan Trevathan, at Blessed Sacrament School in Jonesboro, says she has the same expectations of her students but acknowledges it isn’t going to be the same.

“I think it’s important to remember we’re all in this together. Every student is at home with their parents … we’re all in the same boat. You’re not as a parent able to recreate” the classroom, but can facilitate learning, she said.

As a parent herself, with a prek-4 student, sixth grader and an infant at home, she’s had to use creative ways to educate even when the schoolwork is done. For example, “math in the kitchen, let’s make a cake together,” using fractions and measurements.

“I think we get so caught up in textbooks, just remembering that’s not the only way the students learn,” Trevathan said, adding they should be “intentional about what they’re doing in their free time, doing other things that are engaging to their mind instead of getting on their video game. We don’t have to feel bad they finished their schoolwork by 1 p.m. instead of 3 p.m.”

Beyond the classroom, Becker knows how tough the situation is on parents and students. She has two children in college, her daughter, who is a senior whose student teaching was cut short and her son, who also works as a cashier at Wal-Mart. Her other son is a senior in a public high school, who will miss his prom and his final year of baseball.

“I think they’re really leaning strongly on those (Bible) verses about God’s promises, that he’ll ultimately do good for us,” she said, including 1 Timothy 4:12. “We’re getting a little stir crazy.”

Tips for schooling at home

Click here to read tips on schooling at home from a former homeschool parent.