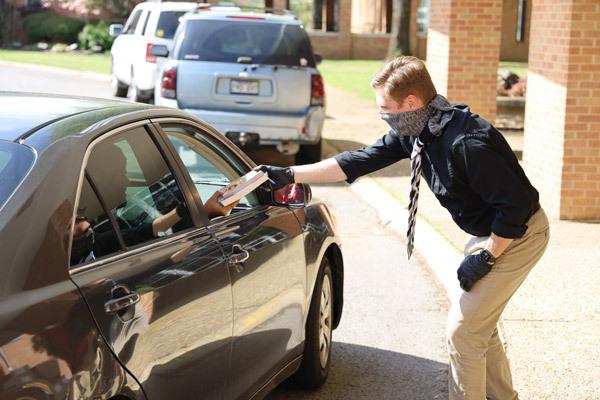 Dwain Hebda
Catholic High School teacher Edward Dodge hands out reading materials at a drive-thru book pickup April 1 at the Little Rock campus. The two-day pickup distributed reading selections as assigned by the CHS English Department across each grade level. Students read and discuss the works as part of their classes, which are being conducted online in the wake of COVID-19.

Dwain Hebda
Catholic High School teacher Edward Dodge hands out reading materials at a drive-thru book pickup April 1 at the Little Rock campus. The two-day pickup distributed reading selections as assigned by the CHS English Department across each grade level. Students read and discuss the works as part of their classes, which are being conducted online in the wake of COVID-19.

Catholic schools in Arkansas will continue with online learning rather than in-person classes for the rest of the 2019-2020 school year, following Gov. Asa Hutchinson’s decision April 6 to keep the public schools closed.

After the governor’s announcement, superintendent of schools Theresa Hall told Arkansas Catholic April 6 that Catholic schools would also close, with approval from Bishop Anthony B. Taylor. All Catholic schools in the state switched to AMI (Alternative Methods of Instruction)

“We had been thinking about, once that April 17 date was decided upon, we were not sure because the peak of the virus hasn’t hit us yet, and from what was coming out with Dr. Nate Smith from the state (health department), saying we’re not going to peak for several weeks out, we knew just for the safety and doing what we could do to control the virus, keeping our families safe and children safe,” that staying closed would likely happen, Hall said. “It’s a big transition. You know the thing is we’re all in this together. This is not something we could ever have planned for or ever imagined to happen to us. The way this outbreak has been monitored and keeping up with what’s coming out, we knew that April 17 date might not be realistic.”

The principals will meet via a video conference on Zoom April 9 to discuss whether high school graduations will be canceled or postponed to a later date.

“That’s something we have to talk about and figure out,” Hall said. “It’s not an easy decision. My heart breaks for especially seniors that have not had some of those senior activities they normally would have had. It’s not something we can really control.”

According to the Arkansas Nonpublic School Accrediting Association, schools are typically only allowed 10 AMI days, usually used for snow days. Soon after the closing of the schools, Catholic schools were approved for an unlimited amount of AMI days.

“The most important thing is there is learning and classroom work going on. We’re not just repeating the same things they’ve already learned; the students are learning new material,” she said. “I know there’s adjustments that need to be made just from what I’ve heard from families what other principals have heard from families, but the teachers are just working so, so hard, they’re doing a phenomenal job. I can’t compliment them enough.”

According to an Arkansas Democrat-Gazette article April 6, Health Secretary Nate Smith stated 2.3 percent of the 875 positive COVID-19 patients in Arkansas are children. As of April 6, 16 people in Arkansas have died from the virus.