Hot Springs nonagenarian reflects on her 40 years as a lector 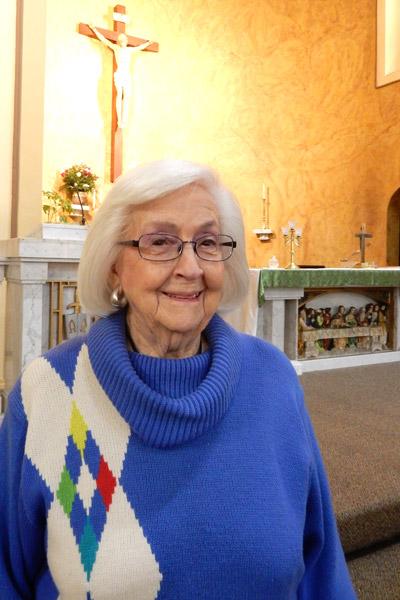 James Keary
Fran Kasemeier stands in the sanctuary at St. John the Baptist Church in Hot Springs, where she was the first female lector and continued for 40 years.

James Keary
Fran Kasemeier stands in the sanctuary at St. John the Baptist Church in Hot Springs, where she was the first female lector and continued for 40 years.

Why you want to know Frances “Fran” Kasemeier: For half her life, she never thought there would come a day when women would have a role in the celebration of the Mass. Then after the Second Vatican Council, which allowed greater participation of the laity — both men and women — she was selected to become the first female lector at St. John the Baptist Church in Hot Springs in 1979.

“I was speechless,” Kasemeier remembered. She said there have been hundreds of women who have followed her as lectors and other ministries during Mass.

Kasemeier has held numerous positions in different parishes and military bases where her husband served, including National Council of Catholic Women in Germany and Arkansas, parish council and Altar Society.

Family: Widow of the late Carl Kasemeier, a retired U.S. Army lieutenant colonel, who died in 2009. She has one son and a daughter who died in 1986, three grandchildren and six great-grandchildren.

You have heard the Mass in many places throughout the world. Where were you most inspired?
In Italy; we were camping on the beach. My husband and I saw a church when we walked up from the camp. It was a very small chapel. The Mass was all in Italian. I knew it was my church. It happened again when I was driving from Iowa to Fort Benning, Ga. I was driving through a little town in Alabama and I found a church. I went inside and the entire congregation was black, and I was the only white person there. It was awesome there. And that was back in the days of segregation.

How did you feel when you first proclaimed the Scriptures?
I was scared to death. We were in Arkadelphia at the Council of Catholic Women. Msgr. Richard Oswald asked me to do the reading. When we came back from the meeting, I had no idea I would become the first female lector at St. John.

Were there any obstacles for women to become more involved with the Catholic Church?
When I left Germany and I came to Arkansas in 1966, women were not involved. We thought Vatican II would open up everything. In the military, they were far, far ahead of civilians.

It was 1979 before women got involved in Arkansas. Like in 1979 when Msgr. Richard Oswald became the first one to say to me, “You will be doing the reading.” I felt it was about time, and they were moving with the times. I was surprised it happened in my lifetime. I never felt that women were thought highly. It was just the way it was. It took a long, long time.

Do you feel the Catholic Church has evolved since Vatican II?
Definitely. We are so much more open.