Dedications to our Blessed Mother have been made since 1792 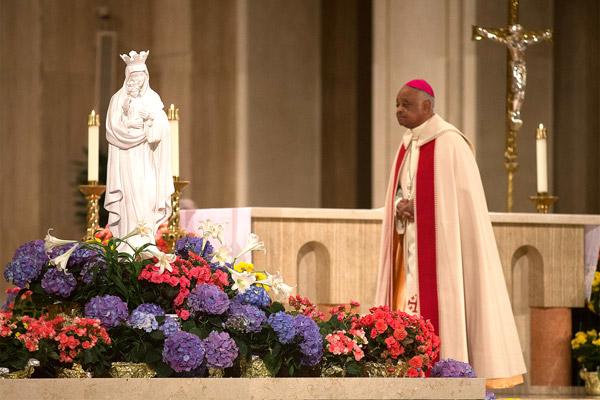 CNS / Tyler Orsburn
Washington Archbishop Wilton D. Gregory leads a special liturgy in renewing the consecration of the U.S. to the care of St. Mary at the Basilica of the National Shrine of the Immaculate Conception in Washington May 1.

CNS / Tyler Orsburn
Washington Archbishop Wilton D. Gregory leads a special liturgy in renewing the consecration of the U.S. to the care of St. Mary at the Basilica of the National Shrine of the Immaculate Conception in Washington May 1.

WASHINGTON — Bishop Anthony B. Taylor and bishops throughout the United States reconsecrated the country to Mary as the nation continues to struggle in the midst of the coronavirus pandemic.

Bishops in Canada also used May 1 to rededicate their country to the Blessed Mother.

Bishop Taylor led the prayer service at the House of Formation, which was shared live on the diocese’s Facebook page.

Alternating between English and Spanish, Archbishop Gomez said: “In this difficult time we turn to the Blessed Virgin Mary, mother of the church. She intercedes with her Son for all are affected in this way by the pandemic. ... We implore her maternal care for her children.”

Archbishop Gomez noted Mary’s history in the United States. “The first missionaries came to this country under the mantle of Our Lady of Guadalupe. Later, the bishops consecrated her as patroness of the United States of America,” he said. “The Virgin Mary has accompanied this great nation since our beginnings,” he added. “Now in this difficult hour, we renew our consecration to her.”

The United States has been hit harder than any other nation in deaths connected to COVID-19, with 68,279 known coronavirus fatalities as of May 5. Although federal and state health officials have been advocating strict measures to “flatten the curve” of infections and fatalities, none have said that deaths have yet reached their peak. Some Americans have loudly grumbled about the slow pace of “reopening” states to travel and commerce, while health officials fear a second wave of infections.

The ceremony featured Marian hymns including “Regina Coeli,” “Hail, Holy Queen” and a contemporary English-Latin setting of the Magnificat. It also featured the recitation of two decades of the rosary: the fifth Sorrowful Mystery, the crucifixion and death of Jesus, followed by the fifth Glorious Mystery, the coronation of Mary as queen of heaven.

At its conclusion, Archbishop Gomez said, “Our Holy Father, Pope Francis, is encouraging us to rediscover the beauty of praying the rosary at home in the month of May. We are still in quarantine in our homes.” He noted that “one of the many saints in Los Angeles was the venerable (Father) Patrick Peyton, who coined the “family rosary” and the phrase “The family that prays together stays together.”

“Maybe we can dedicate ourselves,” Archbishop Gomez said, “to find time to come together as a family to pray the rosary in our homes.”

A similar liturgy of consecration took place at the Basilica of the National Shrine of the Immaculate Conception in Washington May 1, led by Archbishop Wilton D. Gregory of Washington, who prayed: “In this time of pandemic, we come to you, our sign of sure hope and comfort. Today we renew the act of consecration and entrustment carried out by those who have gone before us.”

In 1959, Cardinal Patrick O’Boyle of Washington again consecrated the United States to the Immaculate Heart of Mary. This was the year when construction of the National Shrine of the Immaculate Conception in Washington was completed. The national shrine was elevated to minor basilica status by St. John Paul ll Oct. 12, 1990. This was renewed by the U.S. bishops Nov. 11, 2006.