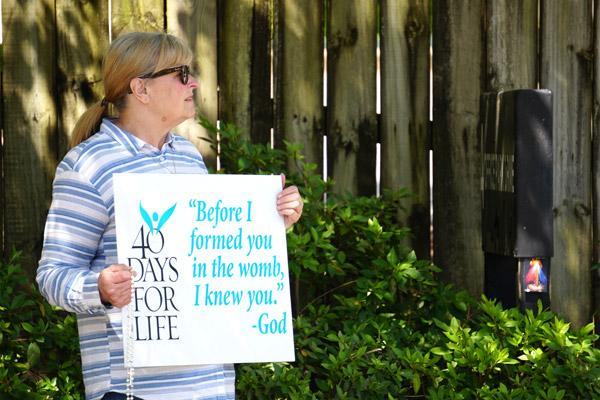 Malea Hargett
Connie Phillips, a parishioner of Christ the King in Little Rock, prays outside the Little Rock abortion clinic May 1 after the state ban on elective medical procedures was lifted, allowing abortions to resume.

Malea Hargett
Connie Phillips, a parishioner of Christ the King in Little Rock, prays outside the Little Rock abortion clinic May 1 after the state ban on elective medical procedures was lifted, allowing abortions to resume.

While the state of Arkansas moves to ease restrictions on social distancing and other safety restrictions due to COVID-19, it lifted the ban on elective medical procedures April 27, which included surgical abortions.

“No matter what the current court battles are, especially during this time of uncertainty in which people are so worried about health care, economics … people are scared,” said Catherine Phillips, respect life director for the Diocese of Little Rock. “People are generally worried; vulnerable women, women in unplanned pregnancies need help more than ever.”

A news release about resuming elective procedures from the Arkansas Department of Health outlined guidelines health care providers must follow, including having an “ample supply of PPE” (personal protective equipment), no contact with known COVID-19 patients within the past 14 days and patients must be asymptomatic for COVID-19 to be treated.

On April 4, Gov. Asa Hutchinson banned elective medical procedures in order to ensure the state had enough medical gear, space and staff to attend to patients with COVID-19, the disease caused by the coronavirus, according to an April 23 Arkansas Democrat-Gazette article.

On April 10, the health department forced Little Rock Family Planning Services, the only surgical abortion provider in Arkansas, to stop abortions that did not threaten the life or health of the mother, considering it an elective procedure, the Democrat-Gazette stated. Though U.S. District Court Judge Kristine Baker blocked the ruling, the Eighth Circuit Court of Appeals agreed April 22 the state could include most surgical abortions as elective procedures.

A hearing with Judge Baker was canceled for April 24 as the state planned on opening elective procedures back up April 27.

“Prior to the Eighth Circuit Court ruling, they were super busy, busier than normal. A lot of out-of-state license plates,” she said of patients coming for abortions, explaining that Arkansas has become a destination for abortion due to surrounding states like Louisiana on lockdown.

Malleson Emmerling, executive director of the Arkansas Pregnancy Resource Center and parishioner at Christ the King Church in Little Rock, said since the restrictions due to the pandemic, they’ve had fewer women mistaking their center for the nearby Little Rock abortion clinic likely due to more detailed instructions from the clinic.

For the past several weeks, the pregnancy resource center has had to lock its door, displaying a sign with a number for appointment rescheduling and have not been able to take clients that do mistake the center for the abortion clinic. On March 16, when protocols were put in place for APRC, two of six employees were in the office. Anyone who has an appointment for an ultrasound must be prescreened by phone, have their temperature taken and sign forms that they have not been out of the state or the U.S. and are not exhibiting symptoms of COVID-19, Emmerling said April 27. Only one client is allowed in the building at a time, she said.

Despite the locked door, the resource center has remained open, Tuesday through Friday, 8 a.m. to 1 p.m. While she’s concerned about the long-term impacts, as large fundraising events for the year are in jeopardy, she said the faithful can both pray and donate.

“We needed to stay open. Also with the fears, what I’ve noticed is women who would not ever consider abortion started looking at abortion as an option because of not being employed, fear of having to take care of their older parents,” Emmerling said, adding that their nurse is there for support and listening, “I’ve seen women change their mind during coronavirus.”

While several diocesan pro-life activities throughout the past month and a half have been postponed, including Project Rachel events, Phillips said amid the chaos, the tragedy of abortion remains unchanged.

“I have not met a single mother who has had an abortion or attempted to have an abortion who didn’t think she was killing her baby. Women today know abortion ends the life of their baby,” Phillips said. “Women aren’t aborting babies because they think it’s a clump of cells. They’re aborting their babies because they think it’s too scary, too horrible a place to bring a child out of the womb and into the world. And that is something we need to work to change.”