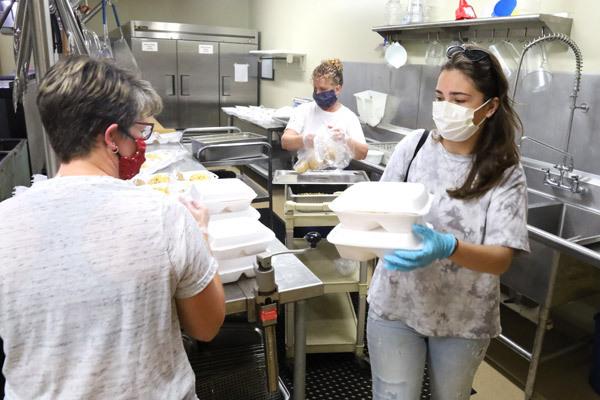 The aroma of chicken spaghetti beckons the Immaculate Heart of Mary Church visitor into the school kitchen to find Teresa Zimmerman and Nancy Flanagan hard at work. The two longtime parishioners know what it takes to feed a crowd — Flanagan is IHM’s school lunch lady, a role she took over from Zimmerman a few years back.

But it’s not uniformed young scholars riding out the last few weeks of the school year that brings these two pals of 20 years into the kitchen. The halls here — as in public, private and parochial schools throughout Arkansas — have been silent for two months. Instead, the duo is dishing up helpings into 80 Styrofoam trays soon to be handed out to the homebound, the unemployed and the just plain hungry.

“The local community needs help, and we’re here to provide that for them,” Flanagan said as she ladled pasta. “I’m so grateful to be able to do it.”

“I agree. I feel blessed that I was able to come up here,” Zimmerman said over a giant pan of green beans. “I was furloughed from my job and this has given me something to do to help the community.”

At IHM, volunteers show up on Wednesdays and rotating Fridays to prepare and package the hot lunch in the school kitchen. Members of Knights of Columbus Council 11097 and other volunteers handle distribution duties.

“We’ve had great response from our parishioners,” said associate pastor Father Joseph de Orbegozo. “To go to people who are in need is to be Christ to them, you know, just as when you saw me and fed me when I was in need. There’s been personal satisfaction but also some true joy that’s come out of responding to that call that Christ has given us.”

Father de Orbegozo helped formulate the idea for CommUNITY Table with Nick Scarborough, associate pastor at Graves Memorial Baptist Church. The church is near IHM in the Oak Grove neighborhood of North Little Rock, but the two men immediately discovered they shared more than mere proximity.

“Nick and I quickly connected; we’re about the same age, and we had some good conversations about faith and how to minister to people,” the 28-year-old priest said. “We started brainstorming about what can we do during this time. People are going to be without jobs. Someone might be without food. There will be some resources through the state, but what about that gap of people who won’t have that, especially the elderly or those who might be homeless that get missed by those other programs.”

“We came up with the idea of asking some churches to come together and help feed those people who will be at risk, who might not want to get out, the people who would be homebound or the people who are poor. That’s where it started.”

Father de Orbegozo brought the idea to pastor Father Rubén Quinteros, who recognized an additional benefit to feeding people in the community.

“It was a blessing at the same time to be able to use some of the food that we already had from the school,” he said. “We had everything planned through the end of the year, so we were able to utilize that food for the people. It just worked out very well for us.”

The meals are offered free of charge to anyone who signs up, Catholic, churched or otherwise. Father Quinteros said parishioners have stepped up with monetary and material donations to help cover miscellaneous costs of the program. He said that, plus the participation of the Knights of Columbus council and other volunteers, is what makes the program go. In return, he said, they get a lot back from their investment.

“For us, it is a way to not only serve our community with food, but it gives us the chance to see the need and for our people to recognize that it is real,” the pastor said. “The stories that (the delivery volunteers) have about knocking at the door and bringing the food; it’s not only gratefulness from the people who receive it, but the need to tell their story, how they lost their job or what is going on in their lives. It’s the need of the people just to talk to other people as well.”

Mary Emma de Orbegozo, Father de Orbegozo’s 22-year-old sister, stacked trays and waited to receive her allotment of meals for delivery. This was her first Wednesday volunteering for CommUNITY Table and the technician research assistant with the University of Arkansas was eager to serve.

“I know there’s people out there who are in need right now and I wanted to help out the best way I can. I know times are hard for everyone,” said Mary Emma, who grew up in Little Rock’s Christ the King Parish. “I think it’s great. I think everyone should be doing their part in some way or another regardless of Catholic, Christian or whatever. I think it’s great that everyone’s just trying their best.”

CommUNITY Table plans to serve meals through the end of May. For more information or to sign up to receive meals, call the parish office at (501) 851-2763, email or visit bit.ly/marchecommunity. To volunteer or donate to the effort, call or email the church office.