President orders immigration halted through July 22, not including most employment visas 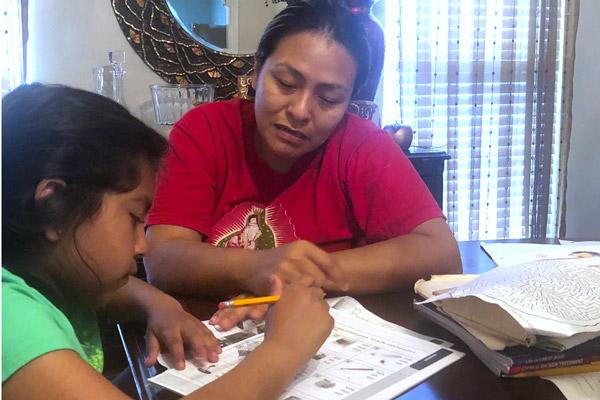 Courtesy Ruiz family
Vanessa Cerda Ruiz (right) helps her daughter Beatriz, 7, a first grader at St. Theresa School in Little Rock, with homework May 4. The mother is a U.S. citizen, but her husband Juan was deported three years ago.

Courtesy Ruiz family
Vanessa Cerda Ruiz (right) helps her daughter Beatriz, 7, a first grader at St. Theresa School in Little Rock, with homework May 4. The mother is a U.S. citizen, but her husband Juan was deported three years ago.

Vanessa Cerda Ruiz, 37, is optimistic, despite the dire circumstances around her. The St. Theresa Church parishioner and mother of four, who all attend St. Theresa School, has lost about 15 housekeeping jobs since the COVID-19 pandemic hit Arkansas.

“I understand people don’t want people coming in their homes. I respect that because I don’t want to feel uncomfortable going into someone’s home when they feel uncomfortable,” she said. “It has really financially impacted me because that’s what I depend on to provide for my family. When you’re self-employed, it’s not easy to file unemployment.”

But it’s not the worst storm she’s weathered in recent years. Her husband Juan, 42, who worked for a company installing underground cables, was deported to Mexico after returning to the embassy in Juárez for his visa interview in 2017. Despite his wife petitioning for him, herself a U.S. citizen, he cannot reapply to return until 2027.

“It’s really impacted all of us. It’s a hard thing to deal with not having your dad, husband here with you to support you in any way,” Ruiz said, and it’s only heightened during this crisis. While the family planned on visiting him in June, the trip may be on hold.

“Sometimes, believe me, I want to pull my hair out and cry, but I always pray to God to give me the strength.” Vanessa Cerda Ruiz

“You just don’t realize how your life can change just like that in the blink of an eye. One little thing can affect your family, just everything. I try to stay as positive as I can. Sometimes, believe me, I want to pull my hair out and cry, but I always pray to God to give me the strength. And I have to keep telling myself there’s always light at the end of the tunnel.”

More than ever, most Americans are getting a glimpse of what it is like being an undocumented immigrant and being separated from family beyond their control.

“During this time we’re all experiencing isolation, but for us, we know this is not going to continue … That’s not the case for undocumented immigrants,” said Jennifer Verkamp-Ruthven, director of Immigration Services in Little Rock and Springdale. “We can sit here and reflect while we’re being forced to stay away from people or certain places and that’s the case every day for undocumented immigrants.”

On April 22, President Donald Trump signed an executive order halting immigration for 60 days, limiting the order to most green card applicants, but still allowing temporary employment visas to be processed for jobs like agriculture workers and essential employees, such as health care workers, according to an April 29 Politico article. Most immigrants seeking green cards already reside in the U.S.

It fell short of his initial comments for a wider ban on immigration. According to ABC News April 28, the Migration Policy Institute estimates 26,000 people who would be green-card applicants would be blocked each month.

“Really, I’m glad it’s only 60 days, but also 60 days is not that long,” Verkamp-Ruthven said. “... I don’t really see what benefit is really coming from this, of course, in regard to the economy or stopping the spread (of COVID-19). There’s already a stop of letting people come in from other countries for now. I think this is playing into the negative rhetoric of this administration on immigration … There’s really not proof that immigrants are taking jobs that Americans would have taken anyway.”

The statement said in part, “The president’s action threatens instead to fuel polarization and animosity. While we welcome efforts to ensure that all Americans are recognized for the dignity of their work, the global crisis caused by COVID-19 demands unity and the creativity of love, not more division and the indifference of a throwaway mentality.”

It also reiterated the impact it will have on those applying for green cards, which Verkamp-Ruthven said is already a yearslong process, and religious workers being allowed to come into the country.

“Say for example if our diocese had a priest ready to come from India to our diocese … they would be held up due to the 60 days,” she said.

According to Deacon Matthew Glover, diocesan chancellor for canonical affairs, there are currently no priests working through the immigration process to come to Arkansas.

Immigration Services in Little Rock and Springdale are closed to the public for in-person meetings, but staff has assisted clients by email, mail, phone calls, texts and video conferences. Those with non-emergency applications have been asked to wait until a later time. Deferred Action for Childhood Arrivals program recipient applications that need to be renewed and others are a “top priority,” Verkamp-Ruthven said.

“We’re not getting as many calls to set up a new appointment and that makes me think that some of them have been laid off from their jobs and don’t have the financial means to pay for an immigration case,” Verkamp-Ruthven said.

Undocumented immigrants, despite paying for and filing taxes with a tax identification number, were not eligible to receive federal stimulus checks issued in March under the $2.2 trillion CARES Act because they do not have a Social Security number. A lawsuit was also brought against the Trump administration by a man in Chicago because as a citizen married to an undocumented immigrant, he is not able to receive aid, requiring both spouses to have a Social Security number, according to Business Insider. There are many who have little access to health care and even some food pantries require U.S. IDs.

“I still manage my donation to church; if I see somebody in need I will help because like I said, we all need help from each other,” Ruiz said. “For the government to do that, I just believe that’s not fair.”

Norma Sekely and her husband Américo, also parishioners at St. Theresa Church, are both undocumented and own a hair salon, which was one of the businesses forced to close temporarily due to the virus.

“It’s difficult. It’s really difficult because the shop, both (myself and my husband) are working there and because it’s closed both of (us) can’t work,” Sekely said through an interpreter, her 14-year-old daughter Karen Sekely. “... I pray. I listen to the daily Angelus. In the afternoon I listen to Father Mark (Wood) and Father Nelson (Rubio) Masses that they have online.”

In her last year at St. Theresa School, Karen Sekely said she’s tried to look on the bright side since the pandemic started.

“I try to be a little bit more creative and make the best of staying home and try to help my parents and stuff,” she said. “But I’m also stressed because they can’t work at the shop; they’re probably stressed about a lot of things I don’t know about.”

Ruiz said it’s important for all Catholics, regardless of status, to keep the faith.

“Whatever circumstances that you are going through, financial problems, anything like that, God never leaves our side,” Ruiz said.