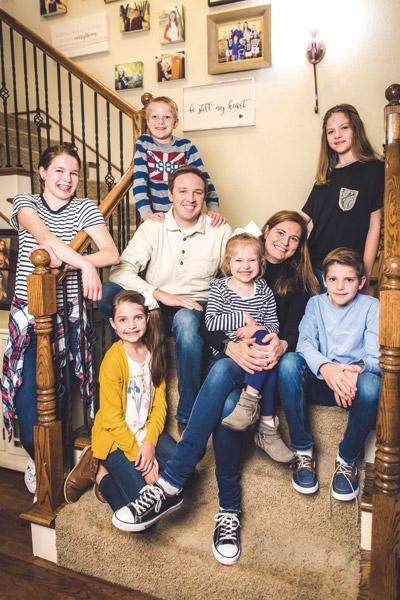 Travis McAfee
Kevin and Tiffany Dickinson pose with their six children in their home. The family of eight is raising money to publish its children’s missal, titled “Diary of a God Man.”

Travis McAfee
Kevin and Tiffany Dickinson pose with their six children in their home. The family of eight is raising money to publish its children’s missal, titled “Diary of a God Man.”

The six kids in the Dickinson family in Fayetteville are solving a problem for their own family — and maybe for yours. The missal used during Mass doesn’t attract the attention of younger parishioners. “Diary of a God Man,” a comic-book-style missalette, is on track to be published this fall. Click here to see one of the illustrations.

Grace Dickinson is blunt in her 12-year-old wisdom — the Catholic missalette is boring. But not because of the Scriptures, which are filled with exciting stories of our faith, but the presentation itself.

“It doesn’t appeal to kids,” she said. “It only has color on the front page.”

And in a family of eight — parents Kevin and Tiffany Dickinson, both 37, and six children 14 and younger — staying focused at Mass can be a challenge.

“It’s trial and error,” Tiffany said, with Kevin adding, “Bribes,” of doughnuts after either 9 a.m. Mass at St. Joseph Church in Fayetteville or the 10:30 a.m. Mass at St. Raphael in Springdale.

To make the Scriptures come alive, the family is creating “Diary of a God Man,” a comic-book-style missalette to not only keep children engaged in the liturgy, but to give them an understanding of the Bible on their level. Their team includes mom Tiffany as the spiritual director and dad Kevin as supervisor.

“The whole point of this is because we wanted kids to be engaged in the Mass and really get something out of the Scriptures; not just sit still and be quiet at Mass and be good, but to leave Mass learning something,” Tiffany Dickinson said.

The family offered the Easter season readings and illustrations for free on their website, diaryofagodman.com, while public Masses were canceled amid the COVID-19 threat.

“It’s challenging enough for kids to pay attention at church, let alone at home,” Kevin Dickinson said. “In these uncertain times having Mass streaming, we just wanted it to be a resource” for families.

But in order to make this book a reality, the family has started a $12,000 Kickstarter campaign, and they’re under the wire.

“If we don’t raise the total amount, we don’t get anything,” Kevin Dickinson said, explaining money is returned to donors if the set goal isn’t achieved.

On Feb. 26, Grace Dickinson won $1,000 in the IdeaFame Business Pitch Contest hosted by Startup Junkie in Fayetteville. She had 60 seconds to pitch their business plan, no notes in hand, and beat out 22 other contestants.

“When I was actually up there I wasn’t too nervous because I’ve been a dancer for a long time so I don’t really have any stage fright. I was pretty comfortable being up there,” she said.

They invested in a Kickstarter video, an attorney and free online illustrations, created by close friend Travis McAfee, a parishioner at St. Raphael and owner of McAfee Studios.

“The unique thing about it is at its foundation, it’s kid led,” McAfee said. The illustrations are based in “modern kid culture,” which as a volunteer youth minister along with his wife, McAfee said it’s important to connect it to a child’s world. It’s also fulfilling his childhood dream to be a cartoonist.

“I just see God working through it. The kids are using their insights and gifts, I’m using mine and we’re all using it to build up the kingdom.”

The idea was kicked into high gear after the contest but was brewing since Advent, figuring out ways to teach children’s liturgy classes.

“They’re really trying to do this without going into debt,” Kevin said of his children.

He is a small-business owner of Preferred Office Technologies in Fayetteville and his wife is a graduate student, working on her doctorate as a nurse practitioner. Their children attend St. Joseph School.

Those who pledge at different levels receive incentives, including $5 for an original digital proof of the book concept to $250 or more, which includes gifts like a signed hard copy, merchandise and a personalized character of the donor or someone of their choice to appear in a Bible reading of their choice. All illustrations get theological approval from Msgr. David LeSieur, pastor of St. Vincent de Paul Church in Rogers.

“That’s been very humbling and overwhelming that people really like this enough and believe in it enough and want to help encourage it to keep going,” Tiffany said.

The first missal, planned to be completed by November, will be for Year A, 232 pages, including 52 Sundays and six holy days. It will include the Sunday liturgy first reading, responsorial psalm, second reading and Gospel illustrations in full color.

Sales from the first book will be invested in books for Years B and C and later on in merchandise, coloring books and publications in multiple languages. They will also put 10 percent of the book proceeds toward St. Joseph School and the church building fund. They’re currently setting up meetings with publishers.

On Sundays, the Dickinsons sit around their dining room table and mom Tiffany reads the Sunday Scriptures. The children then discuss and sketch their interpretations, which are combined by Kevin before being sent to the illustrator.

“We’re all kind of delirious, so everything is funny,” Grace Dickinson said during the family discussions, which can range from one to three hours.

Even when recalling one of her favorite interpretations, Grace giggles, thinking back on one inspirational drawing idea she had with her sister.

“This one reading came up it was, ‘The stone which the builders rejected has become the cornerstone.’ I took the stone and it was like, ‘I’m sad because I got rejected’ and a big thing going around right now is this Uno reverse” memes, using the image of a reverse card from the classic Uno card game. “So I put down an Uno reverse card. After he was happy because he got into the building.”

The ultimate goal is to move children closer to God.

The six kids in the Dickinson family in Fayetteville are solving a problem for their own family — and maybe for yours. The missal used during Mass doesn’t attract the attention of younger parishioners. “Diary of a God Man,” a comic-book-style missalette, is on track to be published this fall. Click here to see one of the illustrations.