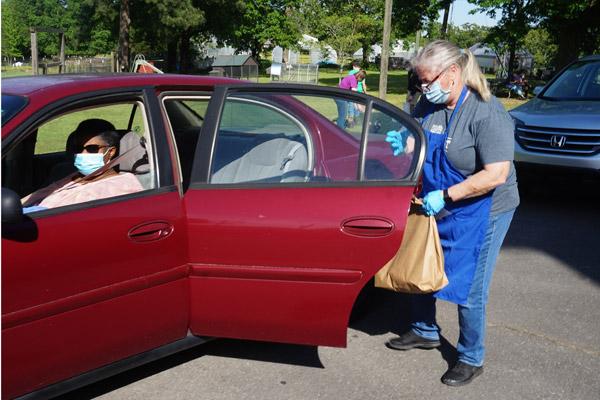 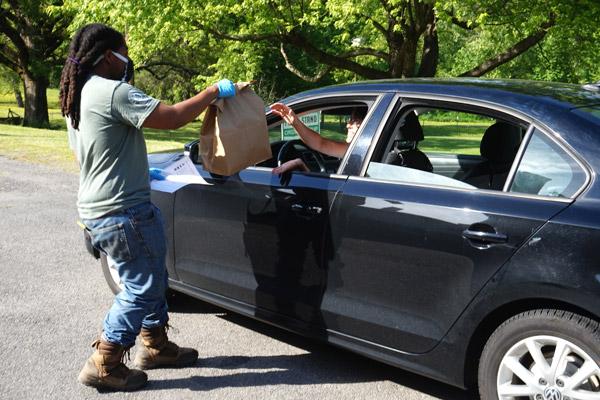 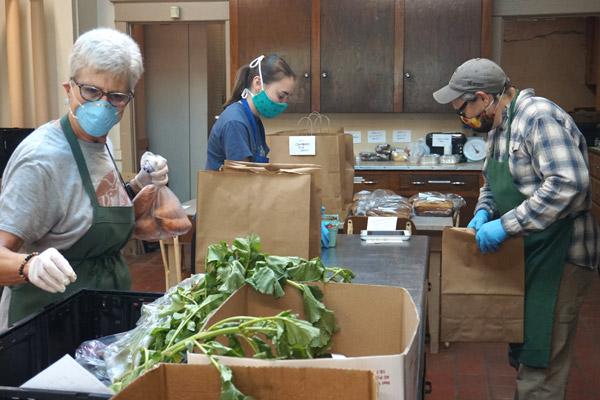 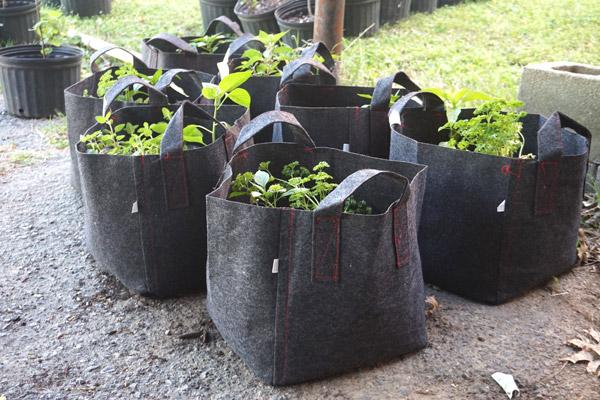 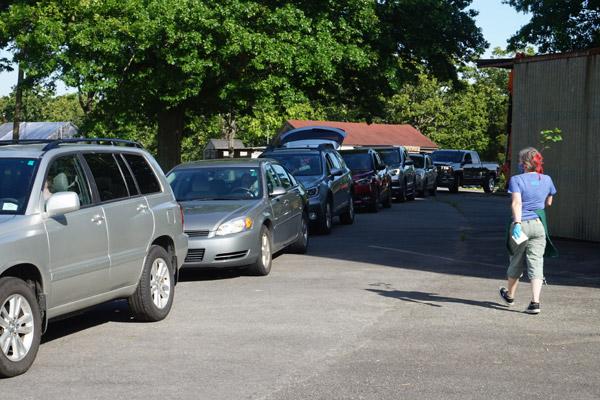 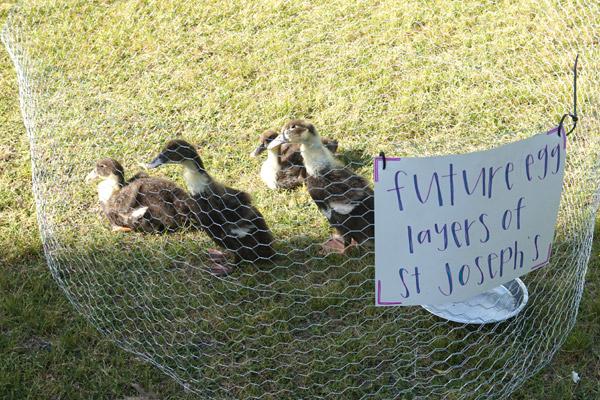 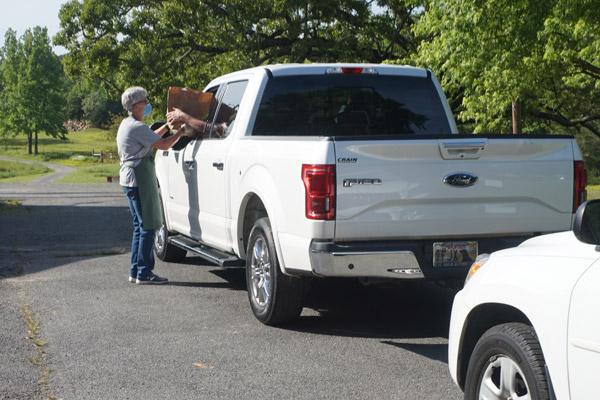 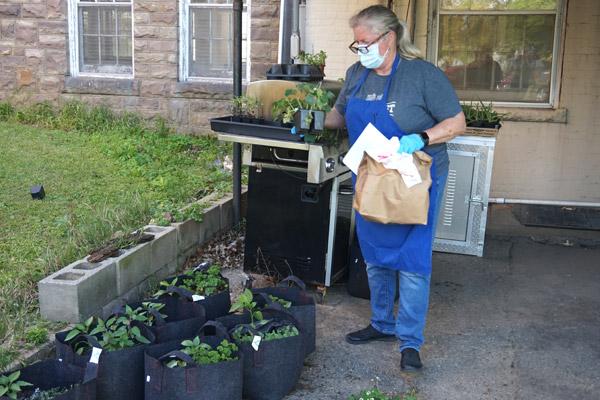 Drive-through service has grown to 150 customers picking up orders 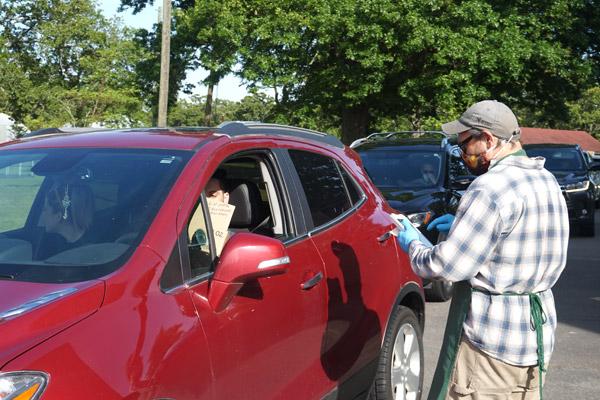 For $50, customers can help St. Joseph Center in North Little Rock and invite a farm animal to their next video meeting. With a virtual animal visit, ordered at stjosephcenter.square.site/product/virtualanimalmeeting/195, people have their pick of goats, horses, sheep, cows, chickens, ducks and even a pet squirrel — for a live video conference up to 30 minutes.

Sonia Leszczyna of North Little Rock waited in her car May 1 for her latest grocery curbside pickup order of spinach, chicken salad, eggs and other produce. It’s a common scenario for most because of the threat of COVID-19, but for the North Little Rock resident, she was shopping local, helping a nonprofit and had the peaceful view of cows grazing in the distance, ducklings in a pen and plentiful gardens on the grounds of St. Joseph Center.

“It keeps you out of the grocery store and the produce is better,” Leszczyna said of the center’s online Farm Stand pickup.

Because of the coronavirus pandemic, St. Joseph Center of North Little Rock has moved its Farm Stand online, allowing consumers to select what foods or plants they want at stjosephcenter.square.site/s/order and pick it up between 4-6 p.m. Fridays. Products include fresh fruits and veggies, dairy, pantry items, prepared foods, bread and grains, meats and plants. A handful of volunteers, donning masks and gloves, fill and bring the orders to the vehicle.

“That’s people’s normal right now, calling ahead to the grocery store and ordering from Amazon, so this was not out of their box so to speak,” said Sandy DeCoursey, executive director of the center.

The nonprofit was established in 2008 and two years later, the Diocese of Little Rock signed a 50-year lease allowing the use of the 56,000-square-foot building and 63-acre property that was once home to an orphanage and day care.

In its sixth growing season, which stretches from May until October, all locally grown produce and products are purchased by the center from about 20 businesses and farms. All purchases from the Farm Stand 100 percent benefit the upkeep of St. Joseph Center, which helps the community with various partnerships including its Arkansas Hunger Relief Alliance Garden planted in 2015. Within four years, it has donated more than 10,000 pounds of produce to the Arkansas Foodbank. The center’s new Victory Garden Bags, available with online pickup, includes a recyclable six-gallon grow bag, organic soil and vegetable seedlings. The $30 cost partially benefits the relief alliance.

In recent months, key fundraisers, farm programs and workshops have been canceled, which DeCoursey estimates attribute to about 60 percent of their budget.

“I think just the realization all our income streams have abruptly stopped,” was the genesis of offering the Farm Stand online, she said.

Volunteer and board member Scott Shellabarger set up the online ordering in a matter of days, with the first pickup March 27, an earlier-than-normal start to the season, with about 50 customers, growing to 150 customers by the third week.

Marcia Childress, who was waiting for her order of honey, dill pickles, lamb chops and brats, has lived in North Little Rock 13 years and never heard about the Farm Stand until local media covered the online pickup.

“Anything that’s homegrown in Arkansas we should take advantage of,” she said.

DeCoursey said the Farm Stand also allows consumers to “shorten the food chain,” knowing their produce hasn’t been shipped across the country or from out of the country. Items are updated daily as they become available.

“It’s harvested within the few days of picking it up, so I think it’s been really comforting for some people,” DeCoursey said.

For $50, customers can help St. Joseph Center in North Little Rock and invite a farm animal to their next video meeting. With a virtual animal visit, ordered at stjosephcenter.square.site/product/virtualanimalmeeting/195, people have their pick of goats, horses, sheep, cows, chickens, ducks and even a pet squirrel — for a live video conference up to 30 minutes.

Praise for school staff, parents who made school year work