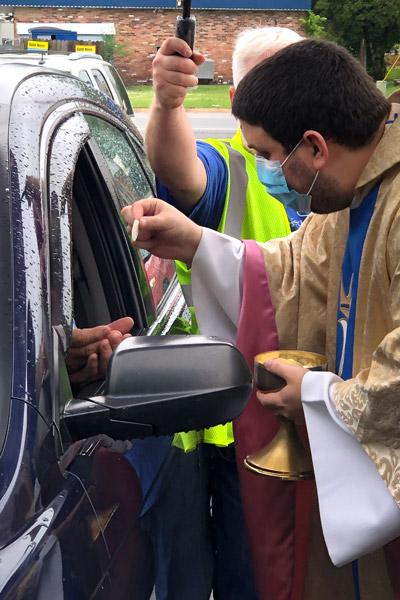 Belinda Ortner
Father Alejandro Puello, pastor of St. Anne Church in North Little Rock, distributes Communion May 17 during a drive-in Mass in the church parking lot. Bill Ortner holds an umbrella to protect the priest from the rain.

Belinda Ortner
Father Alejandro Puello, pastor of St. Anne Church in North Little Rock, distributes Communion May 17 during a drive-in Mass in the church parking lot. Bill Ortner holds an umbrella to protect the priest from the rain.

Masses returned to all parishes May 16-17 in the Diocese of Little Rock after a two-month break.

While some parishes added more Masses or moved them to their parish hall, St. Anne Church in North Little Rock looked outward. All weekend Masses will be celebrated in their parking lot, rain or shine, with parishioners staying in their cars.

“It’s a place of tension where two things meet. As a priest, how do I keep my people safe, but also how do I bring the sacraments to them?” said pastor Father Alejandro Puello.

While Bishop Anthony B. Taylor allowed public Masses to resume as early as May 5 with several restrictions for the safety of parishioners, including mandatory masks, social distancing and only allowing 25 percent seating capacity, churches like St. Anne, with a capacity around 200, are in a unique position because of the small building size. He read several articles about Protestant faiths celebrating services in parking lots, with the faithful staying in their cars, “And I thought, ‘Why can’t this work for Mass?’” Luckily, the pastor was able to find an FM transmitter to broadcast Mass through a car radio.

Parishioners parked, turned their radio stations to 87.9 FM and watched as Father Puello celebrated Mass at an altar under the church awning. One car horn honk served as the sign of peace.

While three weekend Masses were at their typical times, the pastor added an additional Mass to allow for more faithful to attend. Overall, a total of about 180 people attended the weekend Masses.

While inside their cars, parishioners were still required to wear masks during Communion as he distributed the Eucharist through rolled-down car windows.

“It accomplished something I’ve been trying to accomplish for a while ... I’m big on silence; you go take Communion to the person in their car and they get to sit there in silence however many minutes I’m still running around the parking lot bringing Communion car to car,” he said.

Belinda Ortner, director of religious education, and her husband Bill served as ushers for the 4 p.m. and 10:30 a.m. Masses.

“It was beautiful to see other parishioners we haven’t seen in over eight weeks,” she said. “... Ultimately the highlight was to receive the Eucharist again. I just remember that feeling of holding the Eucharist in my hands and finally getting to consume it and just tears welling up in my eyes.”

Tuesday through Friday weekday Masses will still be streamed online.

Father Puello said though this pandemic is new for us, it is not in the life of the Church. Other countries have experienced persecution, leading to the shutting down of Masses, or not having easy access to the sacraments, as well as the 1918 flu pandemic in the U.S.

“The reason we need to be creative is to become resilient because this is going to repeat itself in some way, shape or form,” Father Puello said.

• 33 percent added more Masses to accommodate the faithful while 20 percent had fewer Masses.

• 70 percent of parishes will continue to offer online Mass while offering in-person liturgies.