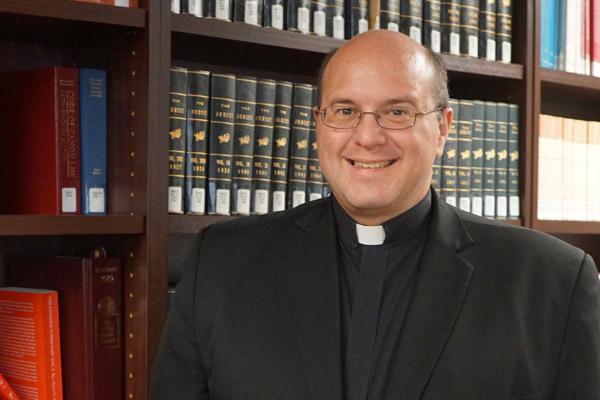 Malea Hargett
Father Greg Luyet, seen here May 14, spends most of his time as judicial vicar for the Diocese of Little Rock but will add duties as pastor of Our Lady of Good Counsel Church in Little Rock beginning May 27.

Malea Hargett
Father Greg Luyet, seen here May 14, spends most of his time as judicial vicar for the Diocese of Little Rock but will add duties as pastor of Our Lady of Good Counsel Church in Little Rock beginning May 27.

During a semester spent in Rome in 1989 as a sophomore at Holy Trinity Seminary at the University of Dallas, Father Greg Luyet, feeling insecure, aware of his imperfections, walked into St. Ignatius Church. There, he saw a picture of the Sacred Heart of Jesus.

“It had Jesus holding his heart surrounded by a crown of thorns in one hand while gesturing with the other. It was like I felt Jesus saying to me, ‘Don’t be afraid to love me and to accept my gift of love. The thorns will come. Don’t fear, because I will be your strength in responding,’” he said, later using the image on his ordination holy card, May 13, 1995.

It came full circle last year, when he again visited St. Ignatius Church, realizing the tomb of Father Felice Capello, SJ, a famous canon lawyer who has a cause for sainthood, was across from the Sacred Heart image. On May 13, 2000, five years after his ordination, Father Luyet received his licentiate in canon law.

“I was just overpowered emotionally,” he said.

These are just two moments in the countless ways God has led Father Luyet, 51, to a life of service, celebrating his 25th jubilee of ordination. He is the judicial vicar of the Diocese of Little Rock and appointed pastor of Our Lady of Good Counsel Church in Little Rock, effective May 27.

“For me, it was never one big ah-ha moment,” he said of becoming a priest. “It was just a very natural desire that I think has been with me since I was a little boy.”

Growing up in Levy, he attended St. Mary School and Church in North Little Rock and later graduated from Catholic High School in Little Rock. He got a taste of ecumenicism, as his mother’s side was Baptist and his father’s was Catholic. The family would often go to Mass on Saturdays and the Baptist church Sunday mornings.

He saw the dedication of his aunt, Sister Vivian Luyet, a Benedictine sister in Fort Smith, and also of his grandfather Jack Rainwater, a missionary Baptist preacher.

“I remember going with him to visit sick people or just hanging out in his office while he was preparing sermons,” he said, but added, “Don’t get me wrong — I was bored to death in church as a kid. But there was something about it (the priesthood) I found very attractive.”

Father Luyet entered the seminary after high school in 1987. He has served in parishes in Fort Smith, Texarkana, West Memphis, Carlisle, England and Little Rock.

“God’s got a plan for me at every place I go to and it’s my responsibility to be faithful to that,” he said.

The late Msgr. William Galvin, former pastor at Immaculate Conception Church in Fort Smith where Father Luyet first served as associate pastor, “taught me more about being a priest than anyone else,” he said.

“I brought him to the hospital before he died. I brought him Communion. I gave him anointing of the sick and I messed something up while I was praying. He said, ‘Relax Greg, God’s in charge, not you.’ That’s something that’s really stayed with me … no matter what the experience is, God’s got his hands in it.”

Father Luyet has previously served as prefect of the House of Formation and is currently the judicial vicar. As a canon lawyer, he works in a variety of roles in marriage processes, penal cases, administrative processes and even sainthood causes.

“It’s all an issue of justice, the justice that’s always connected to mercy and being an instrument of that is important,” he said.

Looking back on 25 years of ministry, Father Luyet said celebrating the Eucharist daily and inviting others to receive the Lord is one of the things he’s most grateful for as a priest.

“I think also the blessing God has given me just to be his helper in a lot of ways,” he said. “Little kids at school, when you have a parish, will come up to you and say, ‘This is God, this is God.’ ‘No, I’m his elf.’ Kids probably don’t get what I’m saying, but I’m one of his helpers.”

An earlier version of this article incorrectly stated when Father Greg Luyet was baptized. This article has been updated.