Pastor served parishes throughout Arkansas for the past 57 years 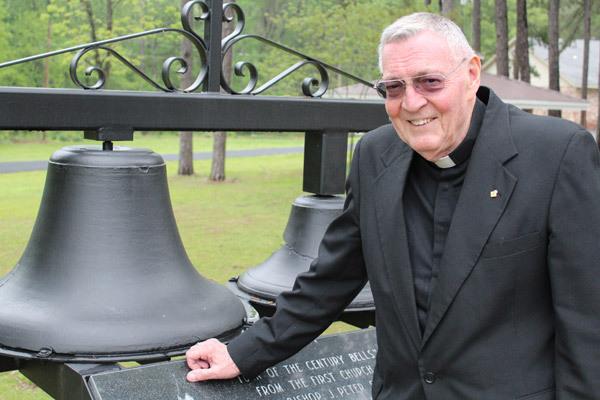 Dwain Hebda, Arkansas Catholic file
Father Richard Davis, pastor of St. Boniface Church in New Dixie who died May 20 at age 83, celebrated his 50-year jubilee in 2013. A native of Jonesboro, he credited listening and a sense of humor for his longevity.

Dwain Hebda, Arkansas Catholic file
Father Richard Davis, pastor of St. Boniface Church in New Dixie who died May 20 at age 83, celebrated his 50-year jubilee in 2013. A native of Jonesboro, he credited listening and a sense of humor for his longevity.

Father Richard Davis, a diocesan priest for 57 years and longtime pastor of St. Boniface Church in New Dixie, died May 20. He was 83.

Born Feb. 21, 1937, in Pocahontas, he attended Blessed Sacrament School in Jonesboro. Observing the kindness of priests while he was an altar server piqued his interest in the seminary. He attended St. John Seminary in Little Rock.

Father Davis was ordained May 18, 1963, at the Cathedral of St. Andrew in Little Rock by Bishop Albert Fletcher, who had also confirmed him. He quipped in a 2013 Arkansas Catholic article celebrating his 50th jubilee, “Bishop Fletcher slapped me in the face when I was 9 and put his hands on my head when I was 27.”

He went on to serve in 12 different parishes his first 20 years in ministry. He served in El Dorado, Pocahontas, North Little Rock, Little Rock, Eureka Springs, Fort Smith, Heber Springs and Searcy. He also served as chaplain of St. Vincent Infirmary and a religion teacher at Mount St. Mary Academy in Little Rock early in his ministry. He later created the Teen Aged Religious Education program, which helped teens in the Arkansas River Valley grow in their faith, his diocesan obituary stated. At the diocesan level, he was dean of the Northeastern Deanery and served on various boards and councils.

In 1996, he became pastor of St. Boniface Church in New Dixie, St. Francis of Assisi Church in Little Italy and St. Elizabeth Church in Oppelo. In 2013, he said he learned the value of listening throughout his five decades of ministry.

“I don’t have good hearing to begin with and so I have always had to pay very close attention when people are speaking,” he said. “I think that’s important. Everybody is in such a hurry today. The ability to listen to someone who wants to talk to you, I don’t think we do enough of that.”

Father Davis also said he developed a flexible nature and sense of humor, saying, “People will give you a headache if you let them, so you either have to meet them with a sense of humor or two aspirin. Regardless, you can’t just not discuss things with them, you have got to be the shepherd.”

He is survived by one sister, Carolyn Davis Johnson of Jonesboro.