Some couples opt to proceed with marriages, but with smaller guest lists amid COVID-19 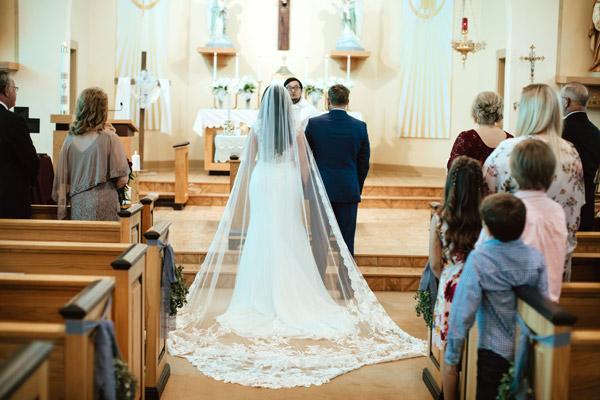 Courtesy Felicia Hausman Photography
Brookelyn Throesch and Joseph Difani stand before the altar at St. John the Baptist Church in Engelberg for their wedding May 9, with Father Stephen Elser as celebrant. They were forced to downsize their guests to 25 instead of the original 350 and switch parishes because of COVID-19 restrictions.

Courtesy Felicia Hausman Photography
Brookelyn Throesch and Joseph Difani stand before the altar at St. John the Baptist Church in Engelberg for their wedding May 9, with Father Stephen Elser as celebrant. They were forced to downsize their guests to 25 instead of the original 350 and switch parishes because of COVID-19 restrictions.

Weddings as expected were or will be fewer in May, April and June compared to 2019, according to statistics from the Diocese of Little Rock Chancery, which receives marriage paperwork from the parish at least 30 days before a wedding.

After dating six years, Brookelyn Throesch and Joseph Difani were ready to walk down the aisle. They had it all planned out after their Sept. 1 engagement — a wedding Mass May 9 at St. Paul the Apostle Church in Pocahontas surrounded by 350 of their relatives and closest friends, with a reception following at a local events center. They’d honeymoon at a resort in Breckenridge, Colo.

Then, COVID-19 swept the United States. While weddings typically have unexpected surprises, figuring out how to say “I do” in the midst of a pandemic is a new norm for couples with state shutdowns and restrictions on large gatherings and Mass cancellations, which have now resumed but with strict social distancing and seating capacity guidelines.

“I tried to stay as hopeful as I could through all of it; it will get better, it will change. And then it didn’t,” the 25-year-old Catholic bride said. “It was just a lot of unknowns. We still wanted to get married that day regardless.”

Elizabeth Reha, director of the diocesan family life office, admits she’s been “putting out a lot of little fires” lately.

Typical preparation for marriage in the Catholic Church lasts about six months, including four main components: meeting with the priest and filling out any canonical forms; completing a FOCCUS compatibility survey facilitated by a priest and discussing the results; education, completing a Pre-Cana class or meeting with a sponsor couple; and a Natural Family Planning course, which can be done online or an in person.

Three Pre-Cana classes have been canceled since March in English and Spanish just in Little Rock, which averages 20 to 25 couples per class, and three elsewhere in Arkansas. The diocese has offered an online program for those that need it. Priests have also found ways to meet with couples with social distancing or video calls.

“When we had to stop classes, a lot of the couples that were getting married at this time had already completed their coursework with the priest … Those June weddings and summer weddings are the ones to be directly affected by the marriage preparation class,” Reha said.

Usually, weddings do not take place during Lent in the Catholic Church or even the week following Easter, Reha said, so most impacts are being felt now and will be into the summer. Reha admits she’s heard from other family life directors around the country who have some couples that have opted to not get married in the Church due to the pandemic.

“It is a concern,” she admitted. “... They have to make a pretty serious choice — am I going to downsize to a tiny wedding or am I going to save it until later so I can have the bigger venue?” she said.

“Not at this time on a general basis,” Glover said in an email regarding whether wedding Masses were allowed to be held outside because of the pandemic. “But we always consider requests for exceptions and would do so here on a case-by-case basis.”

Amanda Carter, 25, and Cooper White, 28, planned to marry at the Cathedral of St. Andrew in Little Rock May 9, but decided to reschedule for Sept. 26. While Carter admitted they were ready to get married after getting engaged Jan. 5, 2019, there were bumps along the way. Father James West, who Cooper had known since he was young when he served at St. John the Baptist Church in Hot Springs, was supposed to officiate their wedding and died March 8.

“That was really hard on Cooper,” his fianceé said. Carter, a Christian and nurse at Arkansas Children’s Hospital in Little Rock, decided in early April to tell their 180 guests that they were postponing.

“I was upset in the beginning just because we’ve been engaged for over a year now, and we want to get married and we already had everything planned and people had hotels booked and everything, so it was hard to tell our guests, ‘Hey, we’ve switched our wedding day and you have to switch your flights,’” she said. “We just feel like we had a lot of stuff we needed to plan out, and I feel like it worked out better for us. And we had to put our dog to sleep that weekend. It was just a lot of things all at once.”

They did complete Pre-Cana online and are in the process of completing their NFP course.

Joseph, 24, and Brookelyn Difani opted to downsize. They were married May 9 at St. John the Baptist Church in Engelberg where she grew up. Initially, they were only allowed to have 10 guests, parents and grandparents. When Bishop Anthony B. Taylor resumed public Masses in a May 4 letter, just five days before the wedding, they were allowed 25 percent seating capacity, which allowed for 25 people at St. John Church, adding siblings, nieces and nephews. Their bridal party, 16 bridesmaids and groomsmen, had to watch a recording on a special Facebook page of the ceremony, including her matron of honor and best friend, who lives in Florida.

“It was hard. All of our bridal party was upset. They wanted to be there with us that day too. It was hard to have to tell them. It was very heartbreaking,” Brookelyn said.

However, the couple hopes to have a vow renewal and reception July 11 and rescheduled their honeymoon.

“I knew the day was going to be great anyway because we were getting married, but it was a bittersweet day for sure. As far as the Mass goes it calmed my nerves because it was immediate family,” she said, adding her husband felt the same. “We were able to focus more on the readings, the Gospel, the homily and everything and really focus on what was happening rather than being nervous … It really allowed us to sit back and breathe and take the day in and really appreciate it and cherish it as well. It was a blessing in disguise but also very bittersweet too.”

Reha said couples should focus on the joy and what really matters.

“I tell the couples when that wedding day comes along it’s not going to be exactly what you thought it’s going to be. To go into that day knowing it is just a day and that their marriage is a lifetime,” she said.

Weddings as expected were or will be fewer in May, April and June compared to 2019, according to statistics from the Diocese of Little Rock Chancery, which receives marriage paperwork from the parish at least 30 days before a wedding.

Financial picture for parishes will be clearer this fall

How students cope with COVID-19 and warning signs

Catholics can lead the way to promote faith, science