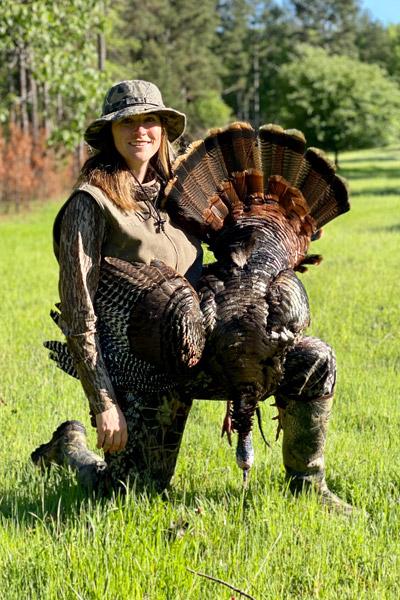 Courtesy Anne Marie Doramus
Anne Marie Doramus poses with her prize during turkey season 2020. Doramus, the first woman appointed to a full term on the Arkansas Game and Fish Commission, grew up in Our Lady of Holy Souls Parish.

Courtesy Anne Marie Doramus
Anne Marie Doramus poses with her prize during turkey season 2020. Doramus, the first woman appointed to a full term on the Arkansas Game and Fish Commission, grew up in Our Lady of Holy Souls Parish.

Arkansans are a sports-loving people by nature and with organized athletic teams on the sidelines — their return date still largely a matter of conjecture — many are turning to the recreational options that lie in The Natural State’s beautiful outdoors.

“The outdoors is wide open right now,” she said. “As far as fishing, people are out on Lake Maumelle and Lake DeGray. Everyone’s out there fishing. Kayak anglers are on the rise, that’s been a really big thing. Hikers, mountain bikers, that’s gotten really big in Northwest Arkansas. As far as the outdoors goes, we’re pretty busy right now.”

It doesn’t take much to get Doramus rolling on the subject of the outdoors and with good reason. Arkansas has an embarrassment of natural riches; large enough to maintain social distance, yet near enough to experience on a single Saturday. As the first woman appointed to a full term as a commissioner of the Arkansas Game and Fish Commission, Doramus is one of the leading cheerleaders for responsible enjoyment of the state’s water, woods and wildlife.

“Being in Arkansas, hunting and fishing is always going to be big. I know the numbers say differently, but it’s always going to be big,” she said. “But when you talk about people getting involved in the outdoors, some people don’t want to go out and kill something or fish for something. It’s not in their DNA. So, there’s also room for people in the outdoors who love bird watching or love to paddle and camp.”

Anne Marie Hastings Doramus speaks with the authority of a seasoned outdoorswoman, which is exactly what she is. Raised in Little Rock as a member of Our Lady of the Holy Souls Church, she spent much of her childhood on the family farmland in southeast Arkansas. In fact, she said, the only thing in her family that surpassed love of the outdoors was faith.

“My Catholic roots run pretty deep. My grandmother, Rosalyn Jones Hastings, her family is from North Little Rock and they were very rich in their Catholic faith and culture,” she said.

“My grandfather, Harry Hastings, grew up with Catholic High. He always talked about how he had a dog, a German shepherd named Trouble, who would literally follow him everywhere and would go to school Mass with him.”

Doramus attended parochial school until the fifth grade, switching to Little Rock’s Episcopal Collegiate School to access resources that helped her overcome a learning disability. However, she admits the decision to stay there for high school was all hers.

Doramus values her faith and finds it nourished by the work she does on behalf of the state’s wild spaces.

“You look at a sunrise and the wonder of it just takes you deep into thought. None of this would have been possible without God’s creation — the birds, the deer, the fish, all of it. It just would not have been possible.”

Two years ago May 5, Doramus married her husband Joe at the Cathedral of St. Andrew in Little Rock, a date the couple dubbed Cinco Doramus. True to form, the two enjoy outdoor adventures from fishing to duck hunting. They do it because they love it and because they want other people their age to follow their lead. In fact, Anne Marie helped found the Arkansas Outdoors Society through the Arkansas Game and Fish Foundation as a way for more 20- and 30-somethings to turn on to the outdoors.

“A lot of people are bored at home right now. Well, why not take somebody out and fish on the banks out at Two Rivers Park, especially since the weather’s not too hot yet,” she said. “What a wonderful way to social distance and get out and even introduce somebody new to the sport.”

“I remember when I was at Holy Souls we did a saint project. You know, ‘Who is your patron saint?’” she said. “Mine was St. Francis of Assisi. I always remember that, because he is the patron saint of animals and conservation and ecologists because of his love for animals and nature. I think that was a sign, OK, this is showing the path that God’s creating for you in the future by having that connection with your saint.”

“I still have my laminated St. Francis of Assisi card,” she adds with a laugh. “I am telling you, I’m a card-carrying gal.”