Senior will bring his running shoes, guitar to seminary as he discerns priesthood 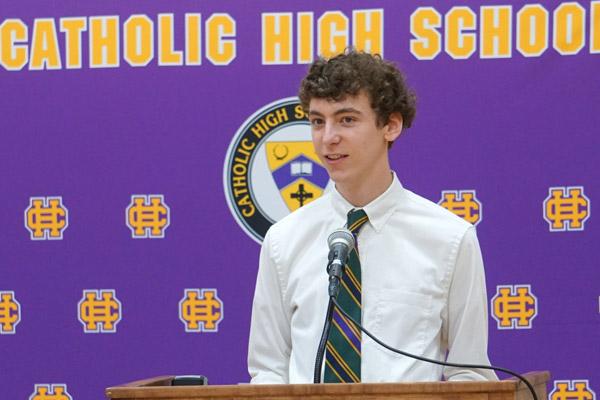 Malea Hargett
Sam Ray speaks after signing on as a seminarian for the Diocese of Little Rock, April 28 in the nearly empty gym at Catholic High School in Little Rock. He was joined by his parents and Bishop Anthony B. Taylor.

Malea Hargett
Sam Ray speaks after signing on as a seminarian for the Diocese of Little Rock, April 28 in the nearly empty gym at Catholic High School in Little Rock. He was joined by his parents and Bishop Anthony B. Taylor.

The quarantine has been a fruitful time for Sam Ray.

The Catholic High senior, who turns 18 on May 31, has been running several miles a day and is teaching himself to play guitar.

These two hobbies are things he plans to keep up with this fall as he enters the seminary, studying for the priesthood for the Diocese of Little Rock.

Joining the seminary is usually a big moment for Catholic High School. Like athletes signing letters of intent to play sports in colleges, the school hosts Seminarian Signing Day and invites the entire school to witness the new seminarian pledging to discern his vocation. This year the ceremony was held April 28 in the school gym to empty bleachers, livestreamed all over social media.

“The opportunity is at Catholic for people to explore their faith, any faith they want to explore. It is there; they just have to look for it ...” Sam Ray

Ray first felt the calling to become a priest in second grade but like many young men he pushed it aside in junior high. By his junior year he started to reconsider it after chaplain and religion teacher Father Patrick Friend asked him to pray about his calling.

“We were writing these papers in religion class for Father Friend and he would write these awesome reflections on my paper. One day during lunch he talked to me and said these papers have ‘priest’ written all over them. I started meeting with him and discerning. He set me up with his uncle Msgr. Friend (diocesan vocations director) and he helped me discern further.”

Ray was still unsure last fall so he went to his best friend for advice.

“He always gives me a straightforward opinion. I told him I didn’t know what to do because I might not get the full college experience, and he just told me I should go to the seminary. I knew that was God through him.”

Ray also made a name for himself at CHS playing the French horn in the pep band and concert band and serving as president and founder of the CHS chapter of Model U.N. He also kept busy as the president of the Young Politicians Club and being a member of the Quiz Bowl and Schola. At Christ the King Church in Little Rock, he has been a member of the CYM and the Team Jesus youth band.

Beginning this month, Ray will move into the House of Formation in Little Rock to begin his formation. In August he is scheduled to attend the University of the Incarnate Word and the Mexican American Catholic College in San Antonio. He will live at Assumption Seminary, where several other diocesan seminarians are studying.

He said he is grateful to CHS for instilling in him qualities that supported his decision to become a priest.

“One of the biggest things was respect,” he said. “I definitely learned how to respect people a whole lot more. I learned how to make stronger connections with people my age … The opportunity is at Catholic for people to explore their faith, any faith they want to explore. It is there; they just have to look for it and they will help you and guide you.”

Conway grad credits school for his desire to serve