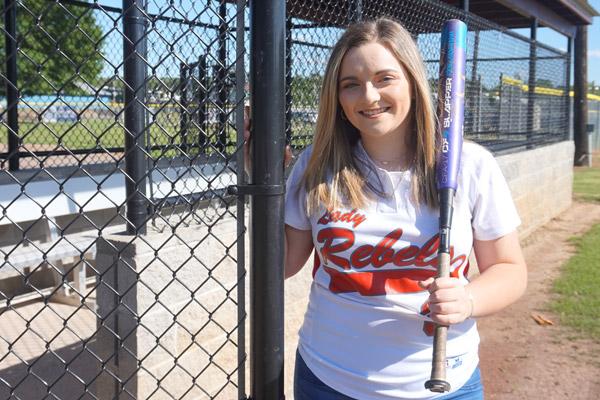 Aprille Hanson
Ryley Welcher, 18, played softball for the Rebels at the local baseball field throughout her time at Sacred Heart High School in Morrilton. She only played three games this year before schools shut down.

Aprille Hanson
Ryley Welcher, 18, played softball for the Rebels at the local baseball field throughout her time at Sacred Heart High School in Morrilton. She only played three games this year before schools shut down.

“I can talk somebody’s ear off. I like to think I’m funny. Some people think I am,” the 18-year-old said.

Welcher has brought her bubbly personality and competitive spirit to everything she’s done at Sacred Heart School in Morrilton, kindergarten through 12th grade.

“I just pray about everything before I decide what I’m actually going to do,” she said. “My favorite (Bible verse) is Jeremiah 29:11 ... Especially with the coronavirus and everything being canceled and this is talking about hope and plans for a good future.”

“My favorite part was just everybody being a family and working as a team to win … I’m very competitive.” Ryley Welcher

A cradle Catholic, Welcher is the daughter of Bernadette Welcher and Todd Chism, born and raised in Morrilton. Thanks to her mother, a former softball player for St. Joseph High School in Conway, Welcher began competing as a child, even winning state championships for recreational leagues.

“She raised me on softball ever since I was 5 years old,” Welcher said. In high school, she wore No. 3, playing second and third base for the Rebels.

“My favorite part was just everybody being a family and working as a team to win. We actually did get to go to state last year, but we only made it to the second round … I’m very competitive.”

The team only got to play three games before the COVID-19 pandemic forced schools to shut down, switching to Alternative Methods of Instruction.

“It’s been pretty rough, a few breakdowns, but I just keep praying and it will get better,” she said.

Welcher, who earned a 3.68 GPA, also enjoyed cheering for the Rebels basketball team and was active in Key Club, Beta Club and as Student Council secretary. At the parish, she’s a part of Catholic Youth Ministry and teaches PRE for kindergarten and first grade students.

At the diocesan level, she attended Search retreat #145 and has gone back to serve with the “inside” and “outside” leadership teams. She also serves on the diocese’s Youth Advisory Council.

In March, the class of 21 made a senior trip to Branson, Mo., before everything shut down.

“It was our last hurrah with our classmates,” she said. “These are the people I’ve grown up with since kindergarten … We’re very close.”

“I want to start small, a local news station. Then one day I hope I can be on a famous news channel,” she said.

While Welcher looks toward the big time, she has a strong foundation of faith, education and friendships thanks to Sacred Heart.

“It has changed my life for the better … everybody is a big family,” she said of the school. “Most of the time we all get along. I’ll probably miss the teachers the most because of how helpful they are.”

Superintendent: Hope and prayer for our future