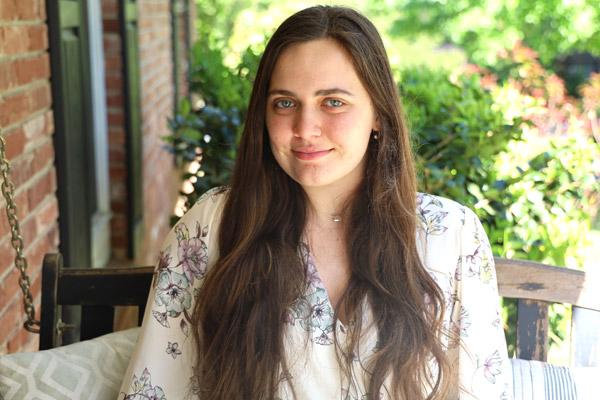 Dwain Hebda
Sophie Mammarelli of Little Rock (MSM ‘20) takes in some fresh air during quarantine. The product of Our Lady of the Holy Souls Church and School plans to study film at the University of Central Arkansas in Conway.

Dwain Hebda
Sophie Mammarelli of Little Rock (MSM ‘20) takes in some fresh air during quarantine. The product of Our Lady of the Holy Souls Church and School plans to study film at the University of Central Arkansas in Conway.

When Sophie Mammarelli entered Mount St. Mary Academy in Little Rock, she was already an artist in other media with only a recreational interest in video. Four years later, she’s a prize-winning filmmaker headed to the University of Central Arkansas’ film program.

“I’ve grown up doing it for fun; my sister and cousin and I have always made random videos together, ever since we’ve had our mom’s first iPhone. We would make little music videos, we would make these weird and funny short films,” she said.

“Since freshman year, I’ve really started to do it a lot more and get better at it. What started with making random things turned into making a bunch of vlogs from trips, that was my big thing for a while.”

Mammarelli further honed her filming chops making a number of promotional videos for her school and for her parish, Our Lady of the Holy Souls Church, along with other projects.

“I would definitely say Mount gave me the opportunity to get close to a lot of people in a very tight-knit community.” Sophie Mammarelli

“Now I’m trying to get more toward music videos and short films,” she said, “the things that come out of my brain, I guess.”

In May, Mammarelli was awarded a scholarship through the Thea Foundation for “Brilliant, Radiant, Overcoming the Senses,” a short film she produced starring classmate America Alejandri. It was a project she almost didn’t have the time to take on.

“I just had a lot of stuff going on and one day I was like, ‘I just need to do it.’ So, I got everything together and filmed it in about a day at my boyfriend’s house then I edited and posted it,” she said. “This was kind of a good way for me to practice making my own short film done entirely by myself. That was really important to me.

Mammarelli, a product of Our Lady of the Holy Souls School, was involved in other ways during high school. She was a member of MSM’s Homecoming Court, National Honor Society, Mountie Messengers ambassadors, Beta Club, forensics team, student council and Holy Souls CYM leadership team. She was also the recipient of the Sister Deborah Troillett, RSM, Endowed Scholarship. She said relationships are what she values most from her MSM experience.

“Something that stands out are the retreats; every year you go to a retreat with your grade,” she said. “That’s a day of bonding and learning and there’s Mass usually and we pray. I always felt so much closer to my grade and teachers. That definitely made me feel like we’re all one big family.”

“I would definitely say Mount gave me the opportunity to get close to a lot of people in a very tight-knit community. Whenever the Mount does something, they tell the whole school about it and everyone has a chance to get involved in it. That’s been really important to me, feeling like I have a lot of people who are there for me that I can come to and knowing my community.”

“All four years have been important and I’m close to everyone at Mount; the teachers, parents, coaches. Everyone has been so kind and caring and giving that I will always remember having this community with my parish, school, CYM, teachers, parents and friends.”

Superintendent: Hope and prayer for our future