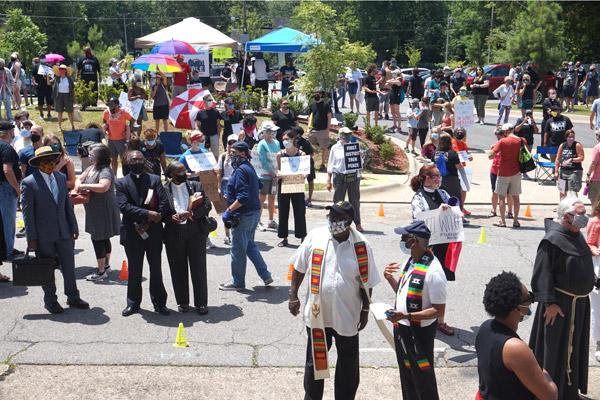 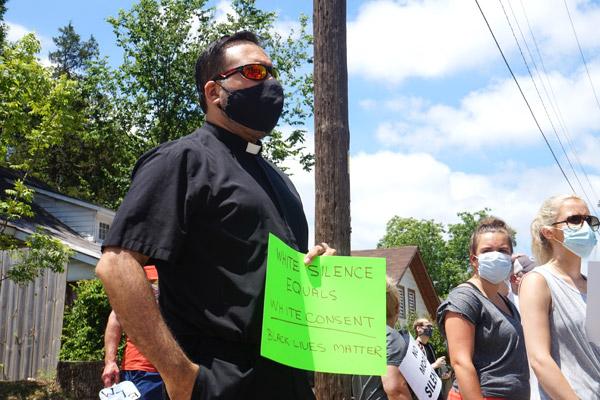 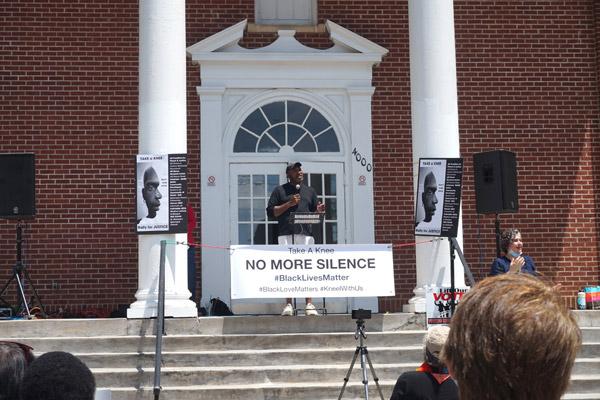 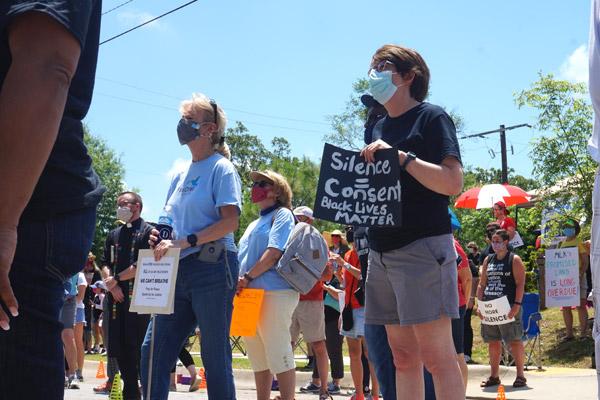 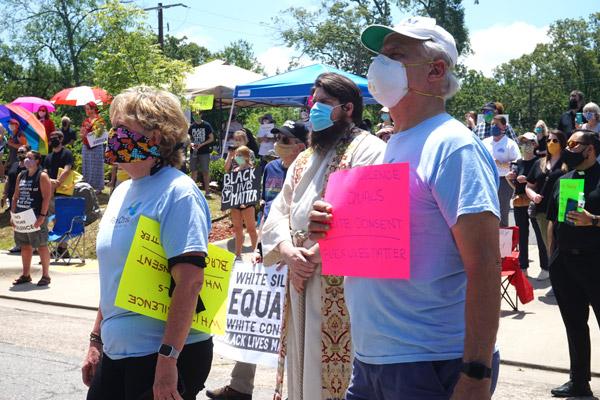 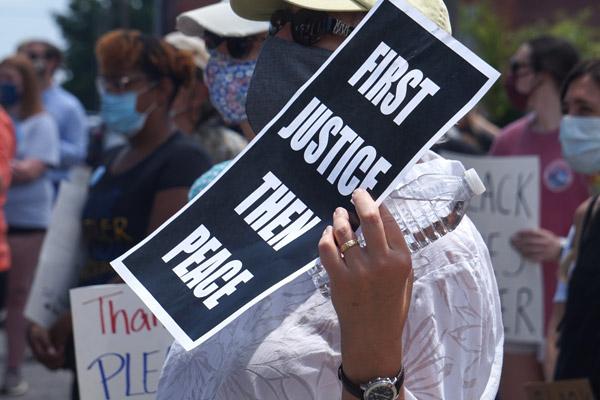 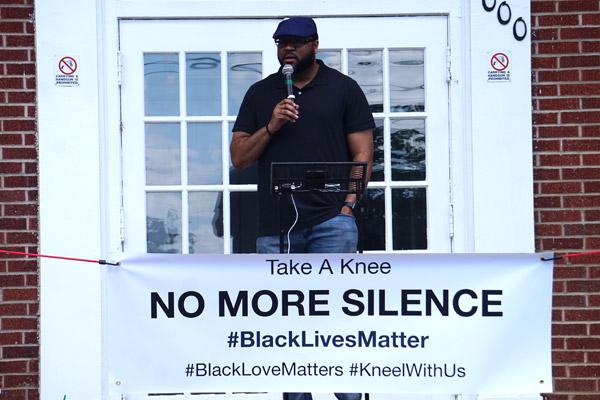 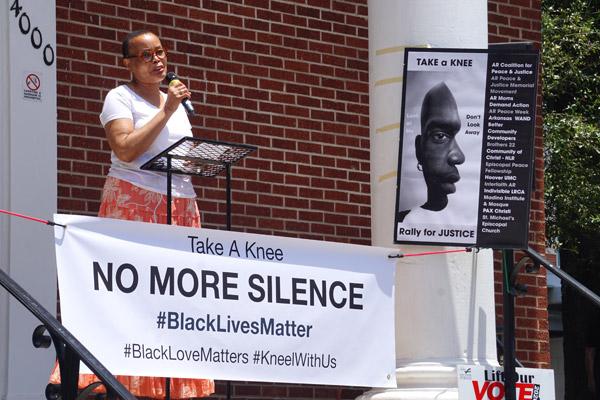 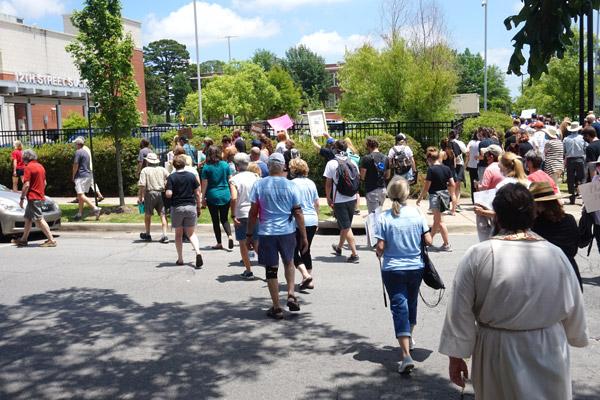 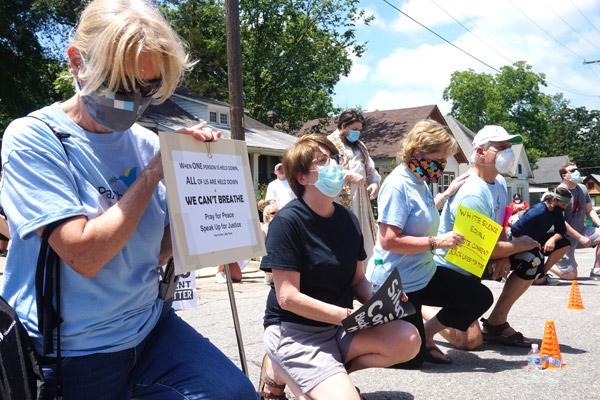 Members of Pax Christi Little Rock, diocesan priests and area Catholics knelt on the hot pavement June 6 in both prayer and protest, repeating the names of black people killed by police brutality in Arkansas.

The “Take a Knee - a Rally for Justice” at Theressa Hoover Memorial United Methodist Church in Little Rock, included local faith leaders and others in protest of racism, violence and the death of George Floyd. The rally was hosted by Indivisible Little Rock and Central Arkansas, with several sponsors including Pax Christi.

Attended by about 400 people, there were faith, political and community activist speakers, including State Sen. Joyce Elliott. It concluded with a march to the Little Rock Police Department 12th Precinct station, with a few demonstrators delivering a signed letter to Little Rock Police Chief Keith Humphrey calling on law enforcement to help dismantle “systemic oppression and deadly racism,” according to a news release.

People of color and white allies walked parallel to each other, chanting the phrases “Thank you for your service” followed by “please protect us” or “please protect them.” Law enforcement also attended the rally.

“There is a systematic racism in our culture that has gone unrecognized and gone undealt-with in many ways for decades,” said Dr. Sherry Simon, president of Pax Christi Little Rock, a Catholic peace and social justice group. “Our Church tells us all of us are brothers and sisters, that God created all of us equally.”

Floyd, 46, was killed in Minneapolis when four police officers detained him after suspecting him of passing a counterfeit $20 bill. Officer Derek Chauvin, now charged with second degree murder, kneeled on Floyd’s neck for eight minutes, 46 seconds on the street as Floyd pleaded that he couldn’t breathe. A nearby teenanger filmed the incident, as witnesses begged officers to stop. At one point, all four officers, who have been charged in Floyd’s death, were on top of him.

A life or a window?

Since the May 25 killing, protests have erupted throughout the country. Bishop Anthony B. Taylor released a June 2 statement in regard to the death of Floyd and the evil of racism (see Bishop Taylor's statement).

Mary Hunt, a member of Pax Christi and parishioner at Christ the King Church in Little Rock said she attended the rally because, “I firmly believe white silence is dangerous and it’s past time for us to join forces with our black friends and neighbors.”

Father Quinteros agreed, saying historically, Catholics have been at the forefront of social justice issues for human rights.

“I know their struggle, not in the same way, but my community, my immigrant brothers and sisters” can understand the need for change, he said.

“This is not about ideology. It’s about defending the rights of people,” he added.

Simon said understanding the Black Lives Matter movement boils down to education, particularly for white people to be educated on what “white privilege” means. She has turned to The New York Times bestseller “How to be an Anti-Racist” by Ibram X. Kendi.

Outside of the protests and prayer rallies, Catholics have been lending their voices to the movement. Seminarian Duwan Booker, 23, remembers receiving the talk from his parents on how to act around police as a young black man.

“It’s really a talk of survival. It’s not necessarily on how we should do things or decorum … it’s  ‘Son, I love you or daughter, we love you and we want you to stay alive,’” he said.

More than policy or training tactic changes, Booker pointed to the disparities in the school system, criminal justice system and housing markets.

“We’re talking about somebody getting arrested over a $20 bill and winding up dead. We’re talking about people in their own home and minding their own business and police busting down the door and killing them,” Booker said, referring to the death of Breonna Taylor March 13 in Louisville, Ky. “... We’re asking for common decency and civil rights that are given to us naturally by God. The infringement upon those is a denial of God’s creation.”

On June 2, Catholic High School principal Steve Straessle released a statement on the school’s social media platforms that stated in part, “We will call out racial injustice when we see it. And, most importantly, we will teach our young men that they have a duty to stand up for others.”

Straessle admitted the school typically does not use its platforms for current issues. However, a black alumnus reached out and explained, “This is an issue about us.”

“If we are a school that is uniquely crafted for teenage boys of all races, colors, backgrounds, creeds then when they are diminished in any way we better speak up,” Straessle said.

He emphasized the school has work to do in diversity of both students and faculty.

Catherine Phillips, diocesan respect life director, said the sin of racism and police brutality, in this case white officers toward black people, is a pro-life issue.

“It absolutely is a pro-life issue and Black Lives Matter is a part of that larger picture,” Phillips said. “It (racism) undermines human dignity … that they’re beloved sons and daughters of God.”

She pointed to the U.S. history of racism as a country toward minorities, including Native Americans and Latinos.

“It doesn’t matter if it’s a baby in the womb, a person murdered in a violent way or even if it’s that person on death row that committed that murder — all of their lives have human dignity.”

Priests have also been encouraged to speak on racism from the pulpit. Msgr. Jack Harris, pastor of Sacred Heart Church in Morrilton, shared in his homily during a streamed Mass June 7 how as a boy, he began to be aware of these issues with the Central High Crisis of 1957 and the fight for desegregation. He pointed to Bishop Taylor’s statement, regarding racism within the economy and society, invisible to those not disadvantaged.

“There is a reality in our society that we call white male advantage. I’m willing to bet any lady gathered with us today would say, ‘Mm-hm, that exists, it’s very real.’ It took me a long time to realize that was real because I’m advantaged by it,” Msgr. Harris said.

He later shared a quote from St. Boniface, “Let us be neither dogs that do not bark, nor silent bystanders, nor hired servants who run from the wolf.”

“We have a chance to look at ourselves and examine where we need to be different. The question is whether we’ll be willing to do it or not,” Msgr. Harris said.

Booker said it’s important for white people to not assume to know the issues of the black community or tell them how to feel or grieve in these circumstances, support black businesses, stand up when racism is heard and listen while checking in on black friends during these times.