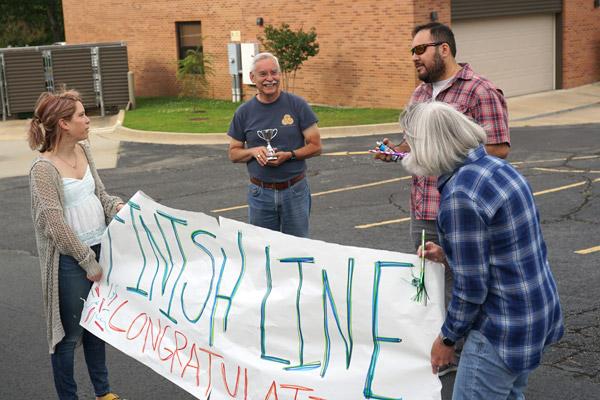 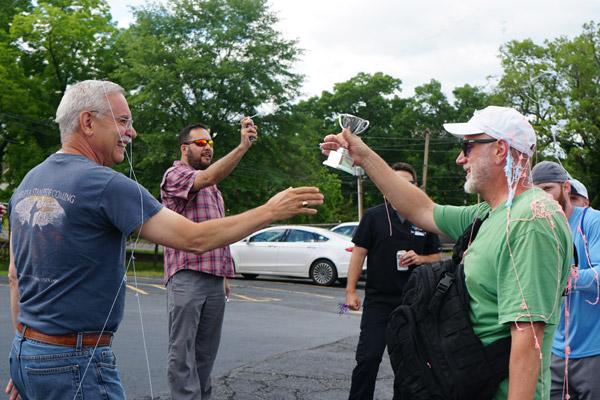 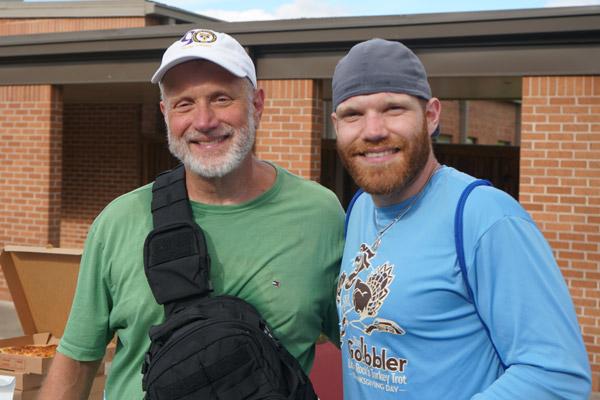 Before ordination to the priesthood in August, Joseph Friend achieves milestone 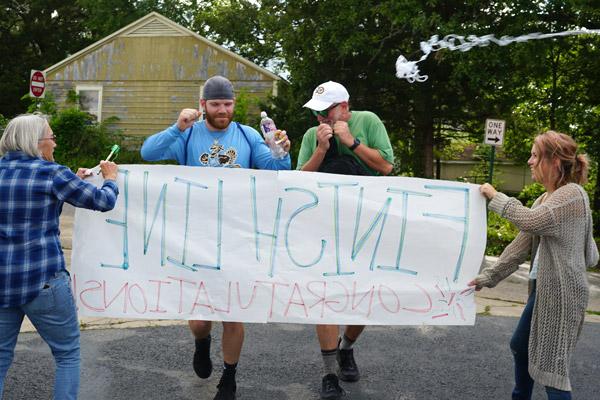 Malea Hargett
Deacon Joseph Friend and Msgr. Scott Friend cross the finish line at the House of Formation in Little Rock May 19 after completing a marathon walk. Family member Liz Tingquist and sister Kat Friend were there to support them.

Malea Hargett
Deacon Joseph Friend and Msgr. Scott Friend cross the finish line at the House of Formation in Little Rock May 19 after completing a marathon walk. Family member Liz Tingquist and sister Kat Friend were there to support them.

On his path toward the priesthood, Joseph Friend had to take a short detour — 26.2 miles to be exact.

When St. Meinrad Seminary in Indiana closed because of the pandemic, Friend and the other seminarians had to move back to their home dioceses March 13. Friend, who will be ordained a priest Aug. 15, was given the chance to live at the House of Formation in Little Rock with his uncle, Msgr. Scott Friend, the diocesan vocations director, and his brother, Father Patrick Friend, a chaplain and teacher at Catholic High School.

All three Friends say fitness is an important aspect of their priesthood. While finishing his final semester of seminary, Deacon Joseph Friend took the opportunity to continue to exercise, spend more time with his uncle and be outside to enjoy the spring weather. Some days they would walk 5 or 6 miles around the War Memorial golf trails. The two would occasionally ramp it up, even walking 20 miles in one day. At times, Father Patrick Friend, Dr. Jerry Friend, brother of Msgr. Friend and father of the Friend brothers, or sister Kat Friend would join them.

Then it occurred to them that if they pushed themselves a little further they could hold their own marathon — 26.2 miles.

While Joseph Friend has competed in 5K races and Msgr. Friend is a big proponent of walking to address symptoms of his multiple sclerosis, neither of them had ever logged a marathon distance in one day.

The date of May 19 was set. They attended Mass at 7:30 a.m. at the House of Formation and walked out the door at 8:30 a.m. for a 5-mile walk to the Arkansas River Trail, complete the trail’s 16 miles and 5 miles back. They chatted about spirituality, life as a priest and Led Zeppelin, stopping only briefly for breaks.

Msgr. Friend tracked the miles on his Apple Watch and even added a few more steps at the finish line to ensure they did exactly 26.2 miles.

When they returned nine hours later, a small crowd of family was there to cheer them on with a paper finish line to bust through and celebratory beer and pizza outside. Bishop Anthony B. Taylor presented them with a small trophy.

“I felt like an old man when I got finished,” Msgr. Friend said.

It is not lost on Msgr. Friend that his ability to complete a marathon is miraculous. The 59-year-old was diagnosed with MS in 2002, and he lives with pain in his legs, feet and back.

“I have to do that to keep my muscles from getting stiff,” he said. “I do have some nerve damage in my spine.”

“My uncle blows everyone away when they walk with him,” Joseph Friend said. “You think, ‘Surely, I can beat this old man’ and he takes off and keeps going.”

By exercising regularly, Msgr. Friend sees it as a sign of his gratitude to God for his health.

“For me to be able to do that is miraculous, given that I have multiple sclerosis,” he said. “In some sense, exercise is showing I am grateful to the Lord because I have to take care of my body. Having gratitude to the Lord for being able to do what I can do. That is a spiritual thing for me. It is a form of asceticism doing exercise. It is good for your soul.”

As the vocation director, Msgr. Friend said he hopes to model to the seminarians what proper health and exercise looks like.

“As priests, we can tell them stuff in formation, but for young men they have to see you actually doing it, so it is a good way to model to them,” Msgr. Friend said.

The bug looks like it has spread to some of the other residents. Three of them are currently in a weight loss challenge, losing about 30 pounds each. They are looking at doing another marathon in July with a larger group.

Deacon Joseph Friend, 26, is serving at Sacred Heart Church in Morrilton this summer and is continuing to run and exercise with seminarian Omar Galván, who is also assigned to the parish.

“The beautiful thing about walking is you really can’t be on your phone. It is just you and the beautiful spring weather. It was really fruitful for awesome conversation,” he said.