For the past five years, he has led monks at the 142-year-old Subiaco Abbey 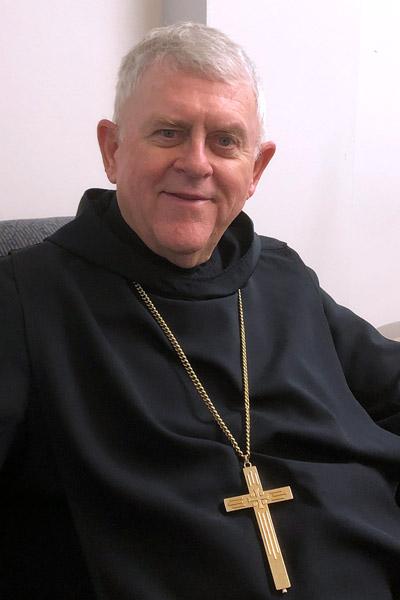 When Leonard Wangler was a child and before he had thought twice about the priesthood, the Sisters of Charity of the Incarnate Word from San Antonio who taught in his Fort Worth, Texas, grade school saw something different in him.

“Early on, they had me pegged as a priest. I don’t know what they knew. I was probably more subdued than most boys of my age. But they must have seen something else there,” he said. “... If we had anything in class related to the Mass or something like that, I was usually asked to take on the role there as a priest.”

Growing up in Fort Worth with three siblings, Abbot Leonard had a connection to Subiaco as a boy, attending summer camps. While a junior at Laneri High School, principal and Subiaco monk Father Leonard Knoff asked, “Well, when are you going up to Subiaco?” That question about a religious calling being “out in the air” helped him take a step toward discernment, he said.

He entered his novitiate year in 1962 and made his final profession as a monk in 1967. After his priestly ordination in 1970, he taught high school religion, math and chemistry in Muenster, Texas, for three years and served as an associate pastor in local parishes.

“I was impressed by the way people listened to me when I talked to them at Mass with the homily,” Abbot Leonard said. “It really wasn’t me at work; it must have been the Holy Spirit at work, with the ability to touch them.”

Ministering to the sick and dying also left a lasting effect on his ministry.

“It was crucial for an odd reason. The reason was I was very uncomfortable doing that. It wasn’t something in my personality that was at the forefront, but the thing that impressed me the most was that every time I would visit these people in the hospital, I would come away feeling good about the experience,” he said.

Abbot Leonard served as a residence hall dean and taught math, science and religion at Subiaco Academy. He earned a master’s degree in educational administration from St. Louis University and served as the dean of men in the 1980s and 90s, headmaster from 1986 to 1988 and interim headmaster for a year in 2010. The key to helping young men grow in their faith is the connection of “what you say and what you do.” And despite the antics of young students — one time, they set up a variety of car mirrors throughout the dormitory angled so they could see when he was in his office and when he wasn’t — ninth grade was his niche.

“I was always impressed that you could actually see during the course of the year the growth of an individual … growth in their abilities and their attitudes and their approach,” he said.

The most important quality of a priest is availability, Abbot Leonard said, something he’s put in practice throughout the past five years as the seventh abbot of the 142-year-old abbey, but also in this time of uncertainty and quarantine amid the COVID-19 pandemic.

“Right now we’re in a not normal situation, so we’re just trying to survive right now … we’ll sort of pull back and strengthen ourselves and go strong again,” he said.

After 50 years, he’s grateful to God for the help along the way and his Benedictine community.

“After Vatican II, one of the things they talked about … they emphasized ‘where two or three are gathered in my name,’ it’s the idea of Christ present in the group, the congregation. That definitely applies also to a group of nuns or monks where certainly two or three are gathered in Christ’s name,” Abbot Leonard said. “Just the idea that Christ is present in the community itself; therefore anything you do, whatever job you have however menial, it might be serving the community, but there’s the additional spiritual aspect there.”