Parishioners can walk around church while praying words of St. Cyril, admiring history 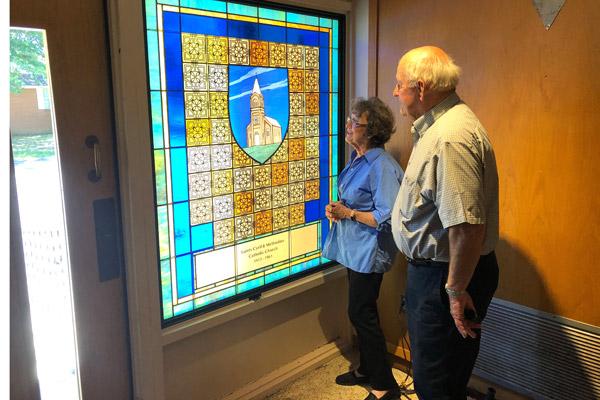 Father Shaun Wesley
Parishioners Virginia (left) and Joe Lisko look at one of the new stained-glass windows being installed June 11 in Sts. Cyril and Methodius Church in Slovak. The window depicts the red brick church in use from 1915 to 1961.

Father Shaun Wesley
Parishioners Virginia (left) and Joe Lisko look at one of the new stained-glass windows being installed June 11 in Sts. Cyril and Methodius Church in Slovak. The window depicts the red brick church in use from 1915 to 1961.

The cost to repair and replace the windows was projected to be $23,750, while new stained-glass windows would be $38,014. The parish opted to work with Soos Stained Glass in North Little Rock for new designs. So far, parishioners have donated $12,895 for the project. The remainder will come from the church’s general budget.

“I was very pleased and everyone that saw it was just like, ‘Wow, that’s beautiful.’ We’re very happy we made the decision of that upgrade,” he said after the first window was installed June 5.

The remaining windows were installed the week of June 8.

The eight windows around the nave of the church include the coat of arms of Slovakia and a gold glass geometric pattern modeled from a small shrine of the Infant of Prague in the parish. Most parishioners trace their roots to Slovakia, making the coat of arms of the Central European country an important feature. Father Wesley said the geometric pattern also harkens to the midcentury modern design of the parish, something he hopes to bring out in future upgrades. Mixing old with the new, the gold-tone pieces of glass in the newly installed windows were the same as the original windows, purchased new from the same company, Kokomo Opalescent Glass in Indiana.

At the bottom of each window are lines from a prayer that St. Cyril gave on his deathbed that parishioners can read in sequence, similar in concept to the Stations of the Cross. Father Wesley found the prayer in “The Life of Constantine (Vita Constantini),” as St. Cyril’s birth name was Constantine. The saints were known as the “apostles” to the Slovak people.

“It’s a beautiful prayer about him praying for the people he brought to the faith,” he said, adding it’s also a visualization of the saint continually praying for the parishioners and the city of Slovak.

Virginia Lisko, married for 58 years to Joe Lisko, who is a lifelong parishioner at the church, said she loves the prayer at the bottom of the windows.

“When you walk in the church, it’s just a totally different atmosphere than it was before … just the warmth,” she said. “You just get a feeling of warmth and engulfed with the sense of serenity and prayer. I think that’s what’s neat about it because you feel so close to praying to Christ.”

Two additional windows beside the side church doors, near the sanctuary, are similar in style, but each include an image of the previous parish buildings and the dates they were used — the original white wooden church, from 1900 to 1915 and the second red brick church, from 1915 to 1961. It’s a way to honor the previous buildings on the same property, the pastor said.

While the windows are darker stained glass, so less light, it brings “more vibrance to the sanctuary,” Father Wesley said.

The parish also celebrates its history by hosting Slovak Heritage Day near the feast day of Sts. Cyril and Methodius Feb. 14.