Print, digital subscribers can stay connected to the Church during pandemic 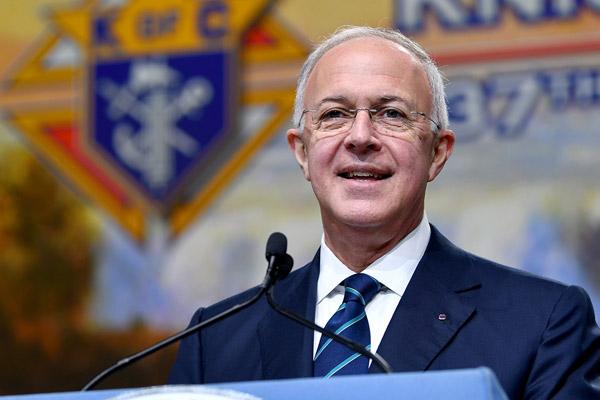 WASHINGTON -- Catholic activist Martin Gugino long has been anti-war, anti-hunger, anti-violence, when it comes to opposing social ills, but the one “anti” that doesn’t fit the bill is the “antifa” moniker President Donald Trump tried to pin on him in a June 9 tweet, friends say.

Knights ‘praying for years’ for beatification

WASHINGTON -- Father Michael McGivney, the founder of the Knights of Columbus, may be an ideal prospective saint for the current age, said Carl A. Anderson, supreme knight of the international fraternal order.

VATICAN CITY -- President Donald Trump said he was “honored” by an open letter from a former Vatican official who claimed that restrictions to prevent the spread of COVID-19 were part of a Masonic plot to establish a new world order.

NEW HAVEN, Conn. (CNS) -- The Knights of Columbus called on the nation’s Catholics to participate in a novena beginning June 7-15 to pray for national unity and an end to racism amid the unrest following the death of George Floyd at the hands of a Minneapolis police officer.

Q. When I attended parochial school, we were taught that a priest could not say Mass by himself and needed at least one other person as his “congregation.” But lately I have been told that priests are required to celebrate Mass every day, even if there are no other people present. Which is correct? (Question Corner, Seeds of Faith)

Church has some soul searching to do on racism

The global protests over the long-standing plague of white supremacy, most recently manifested in the police and vigilante murders of George Floyd, Breonna Taylor and Ahmaud Arbery, have put our nation and Church on the precipice of monumental change or devastating setback. (Columns)

The conclusion of the 50-day Easter season is marked at Pentecost, but, in some ways, the Easter season feels as though it’s continuing, with the recent resumption of public Masses in the Archdiocese of St. Louis and elsewhere across the United States. (Guest commentary)

Police reforms on the horizon

The recent protests against the death of George Floyd and police brutality, particularly against black men, have brought a lot of issues to light that need to be resolved. (Editorial)