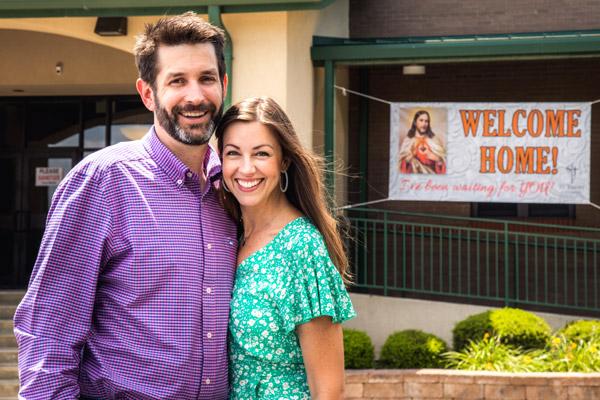 Travis McAfee
Seth and Amber Haines smile June 22 in front of their new faith home, St. Joseph Church in Fayetteville. They joined the church May 17, after being delayed since Easter in becoming Catholic along with their four sons.

Travis McAfee
Seth and Amber Haines smile June 22 in front of their new faith home, St. Joseph Church in Fayetteville. They joined the church May 17, after being delayed since Easter in becoming Catholic along with their four sons.

Seth and Amber Haines and their four sons were ready. The road that led them to the Catholic Church was rocky and full of twists in the shape of hardships and questions, but as a family, Easter 2020 was finally their year.

Then, purgatory happened. Author and lawyer Seth Haines wrote in a column published May 13 in America magazine, a national Jesuit publication, about the sense of purgatory befalling those joining the Church this year amid the COVID-19 outbreak.

“That night, as my family tuned into the parish’s online Easter Vigil, I considered the scores of would-be Catholics sitting in their living rooms,” Haines wrote in America. “We were starving for the eucharistic feast we had waited so long to enjoy. My stomach growled at the words of David: ‘How long O Lord? Will you forget me forever?’”

Just four days after publication, Haines and his family entered the Church at St. Joseph Church in Fayetteville, as public Masses resumed in Arkansas. Speaking with Arkansas Catholic, Seth Haines explained the feeling of purgatory was painful.

“I don’t feel like angels came down and sang over my head. I felt relief … it was 30 years in the making.” Seth Haines

“On the day of resurrection of joy, we’re supposed to have all this joy. We’re not getting what we want,” he said of Easter. When they entered the Church, a simple setting compared to Easter Vigil, “The best way I can describe it and it’s going to sound so odd, but I felt relief … I don’t feel like angels came down and sang over my head. I felt relief … it was 30 years in the making.”

Purgatory began when the now-42-year-old Fayetteville resident attended Immaculate Conception School and later Trinity Junior High, both in Fort Smith. As a Baptist, he learned he could not receive the Eucharist.

“In a lot of ways I was probably seen as a model Baptist boy. Underlying a lot of that was a ton of doubt,” Haines said.

He attended church throughout the week, immersed himself in youth groups and became a youth minister for a year after college. But amid the literalist style of preaching, including the creation story, his literary mind often wondered if the psalms and other parts of the Bible were meant to mean something beyond a literal sense. It was a thought expounded on by then-teacher Msgr. Jack Harris explaining that there was something bigger we were meant to glean from the story of Creation, instead of interpreting it from a literal Adam, Eve, snake and fruit sense.

He invoked that sentiment in his Baptist religion class and was met with, “there are certain things we don’t believe, don’t say and don’t ask. I learned pretty quickly not to ask a lot of questions and expose my doubt.”

His wife Amber Haines, 40, raised in the Church of Christ, had a similar faith life growing up — heavily involved but there were questions, despite the love they had and still have for their Protestant brothers and sisters.

“I came to faith at age 18,” after an abortion and in the deep brokenness that came with it, Amber said. “Jesus completely changed my life. I got up from that depth. I know what I’m doing with my life. I felt very called and appointed to be a minister in the church.”

The couple, married almost 21 years, had a close brush with death when their youngest son was just a few years old. It was when Seth’s drinking, his “acute season of pain,” came to a head.

He wrote “Coming Clean: A Story of Faith,” an award-winning book published in 2015, about the struggles of addiction and how God meets us within that pain. Formerly a law firm partner, he broke away to focus helping writers within a publishing company until writing his own book. Today, he is a partner with RMP in northwest Arkansas.

The Haines joined the Anglican church in 2015 and his wife was in seminary studying to be a minister. During a gathering of dinner with friends, breaking bread and wine, Seth Haines tasted what he still can’t fully explain.

“It tasted like when you’re a kid and you fall on your palms and suck on it; it was body, blood and asphalt. It was the most bizarre, undoing thing I ever experienced,” he said, telling his wife, “I don’t know what that was, but we have to figure this out.”

He joined RCIA in the fall of 2018 while Amber Haines was on track to be ordained an Anglican priest.

“I think I can clearly say I have the Anglican church to thank” for becoming Catholic, she said. “There were things I needed clarity on about the Eucharist and what it meant to be Anglican. I never could get a clear picture because there was so many different answers to the question.”

Before Easter Vigil 2019, Seth Haines struggled with marital unity in that he’d be having Communion in the Catholic Church while his wife was an Anglican minister; her conversion journey didn’t begin until fall 2019. While an Anglican priest said it wouldn’t be a problem, the easy road, Father Jason Tyler, pastor at St. Joseph Church in Fayetteville, offered a different perspective.

“He was like no, actually unity in your marriage is the paramount concern. He didn’t downplay the importance of Catholic doctrine and the Catholic faith. He said things like, ‘take your time and see how this plays out,’” Haines said. While Seth was angry at the time, it was “a huge piece of formation. The first time I actually had to say I have to give in to the authority of the Church.”

So, he waited again.

When Amber and their four sons — Isaac, 15, Jude, 13, Ian, 12 and Titus, 8 — came into RCIA in fall 2019, it was a “creeping joy” Seth said due to the painful circumstances surrounding leaving the Anglican church. But the joy of the Eucharist prevailed.

“If the Eucharist isn’t Jesus and doesn’t become our bodies and send us out into the world to love and serve the Lord, then what is it doing?” Amber said.

Hardly Easter Vigil, there were roses at the feet of Mary’s statue and the church was scarcely filled May 17 due to seating capacity restrictions. But it was comforting.

The couple has both written on faith, including Amber’s 2015 book “Wild in the Hollow: On Chasing Desire and Finding the Broken Way Home,” explaining how God makes himself known in the broken moments of life. She plans to return to college soon for further study of Catholicism. In January, Seth published “The Book of Waking Up: Experiencing the Divine Love that Reorders a Life,” fitting in this time of the coronavirus pandemic.

“In this time of increased pain … what are the things I’m turning to?” he said, encouraging turning to the love, service and reverence of God, even after we fail. “I wrote the book on it and still I’m turning to food at the end of the day, I’m turning to Netflix, Twitter.”

This time of uncertainty means we are all experiencing purgatory and the chance to model Jesus, he said.

“Looking back on that, it was so beautiful we all got to come in together … I had to lay down my wants,” he said.

Even now, the family attends Mass every other week in person, to make sure their exposure is lessened to those around them.

As he wrote for America, “But as we wait, perhaps a new imagination can take hold. Maybe we can see this time as a sort of living purgatory, a time of preparation before entering into the joy of heaven on earth.”