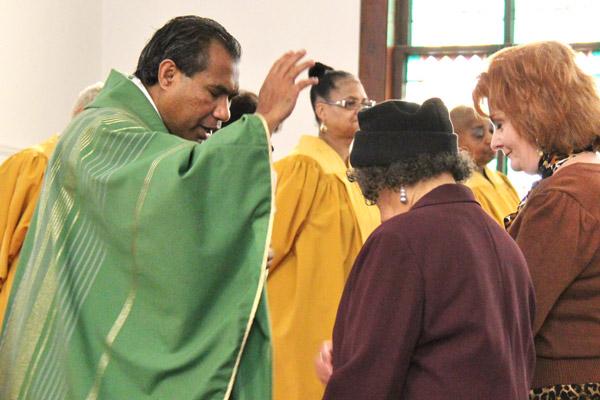 It is ordinary in the way that there was no lightning bolt, no voice from God or revelation showing him he’d one day be a priest. But God has worked miraculously in little movements, laying out the path for Father Rotok to be a missionary. On Sept. 8, he’ll celebrate 25 years as a missionary priest with the Society of Divine Word. For the past five years, he’s served as pastor of St. Peter Church and St. Raphael Church in Pine Bluff and St. Justin Church in Star City.

“I went to (minor) seminary not with the idea to be a priest; I just wanted to have a good education. And my dad agreed. It’s curious because I didn’t think too much or focus on becoming a priest,” he said when he was studying in his native Indonesia. “Even when I was in major seminary, I didn’t understand why, but I think that’s also another way God calls his people. He called me to this very special call. I just followed my inner voice. I felt there was no other path that I had to take.”

His parents, now both deceased, had a strong faith life, growing up in a small Catholic area in predominantly Muslim Indonesia.

“Because we lived around Muslims, the Catholics really struggled to maintain their faith,” he said about the country as a whole. “My uncle — my father’s brother — is Muslim. In my area we live peacefully, there’s no problem.”

Father Rotok said his father “was a big influence in my spiritual life.”

“He was part of the parish council and he used to work very close to the pastor, and I used to be an altar boy. When I was about 8, 9 years old I started to serve on the altar. But I have never thought to be a priest,” Father Rotok said.

But a seminarian who taught religion in his public middle school inspired him to look into attending seminary, which in Indonesia is more of a high school than merely for men following a religious calling. “They had a very good education, but not only the intellectual aspect, but personally and spiritually.”

His heart moved him to join as a novice with the Society of Divine Word religious order in 1986. He learned unique skills, including building upon his early martial arts training.

“In our seminary, we learned martial arts to be used as a tool in youth formation because young people like that,” as well as Bible study and meditation. He said he used his martial arts skills early in his ministry to connect with youth.

He chose being a missionary over being a diocesan priest because “I wanted to go around the world, so I chose SVD,” he said.

After his Sept. 8, 1995, ordination, he served in Indonesia for a year, then Bolivia for 12 years. He came to the United States in 1998 to learn English in Iowa and spent three years in Houston with a Spanish-speaking parish. In 2012, he went to Louisiana and ministered to the Hispanic community. In 2015, he came to Pine Bluff.

“In Bolivia, you just go around and go and talk, but in the United States, everybody has privacy; I learned how to respect their privacy. You have to be independent,” Father Rotok said.

While his parishioners are older, Father Rotok said he feels “they accept me like their child or something, the love that they have for me.”

Coming from a different country and also ministering in other countries has taught him to learn and be open to other cultures.

“I learned a lot about how they have different points of view, different concerns,” pointing to the Hispanic and African American communities, he said. “So I try to be that bridge … to respect them.”