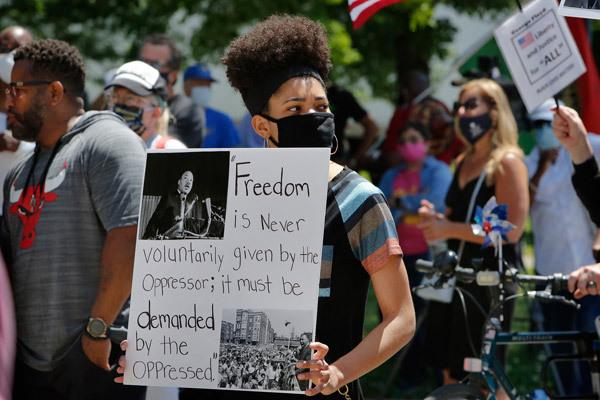 Bishop Anthony B. Taylor issued this statement July 2 in response to discussions about the Black Lives Matter movement and racial inequality.

When I came to Sacred Heart Parish in Oklahoma City as pastor in 2003 the parish was 95% Hispanic and I inherited a weekend schedule with six Masses -- three in English and three in Spanish. The Spanish Masses were packed, with people standing in the back, in the side aisles and at times even outside the front door of the Church. The English Masses were less than half full even though they had the more desirable Sunday morning time slots. I asked what we would do if the tables were turned and we had English speakers standing in the back, along the aisles and outside the front door and they realized that of course, we would adjust the Sunday schedule to provide more English Masses. In that way, the eyes of these well-meaning people were opened to the hidden injustice embedded in our Sunday schedule. When I left that parish five years later, we had nine weekend Masses that better corresponded to the makeup of the parish: seven in Spanish, one in English and one bilingual. When people know that they matter things begin to change.

That is the contribution that the Black Lives Matter movement is offering to us today. All lives matter, of course, but as a society we don’t act that way — and that’s the point. There are injustices embedded in the way our society is structured to which we are often blind. Most of my Anglo parishioners were aware of the crowding at the Spanish Masses, but they didn’t think of it as a problem, indeed viewing it from outside, they spoke with admiration of the fervor of their fellow parishioners and were blind to the underlying injustice. In a similar way, most of us are aware of some of the disadvantages that come with being Black in America, but from the outside we tend to ascribe these disadvantages to internal factors within the African American community and we miss the point that if Black lives really mattered as much as white lives, our whole society would be structured differently. If you search the internet, you will find many examples of structural problems in law enforcement, employment, health care and education that especially impact Black lives and to which even well-meaning people are often blind. The causes of these injustices are often complex, and some seem due more to class than to conscious racism because poor people of other races often suffer some of the same disparities, but the following seems very significant to me:

Structural injustices in law enforcement: Black people are more likely to be arrested are more likely to be convicted and on average are given sentences 19% longer than white people convicted of the same crimes — meaning that in the criminal justice system as presently constituted, white lives seem to matter 19% more than Black lives. (1) In New York City 88% of police stops in 2019 involved people of color — Black and Hispanic —66% of which did not lead to arrest, while only 9% of stops involved white people. (2) These were “stops” not arrests. When Black people feel targeted disproportionately, resentments grow, as does the need to insist that their Black lives really do matter.

Structural injustices in employment: Black people are twice as likely to be unemployed as whites and once employed they earn nearly 25% less than their white fellow employees and are less likely to be employed in a job that is consistent with their level of education. (3) One study found that job resumés with traditionally white-sounding names received 50% more callbacks than those with traditionally Black names. (4) When the playing field is not level, it is clear that their Black lives don’t matter to employers as much as other people’s lives do.

Structural injustices in health care: A study by the Agency for Healthcare Research and Quality found that from 2013-2017 Black patients received worse care than whites in about 40% of quality measures. (5) One result is that Black women are 3 to 4 times more likely to experience a pregnancy-related death than white women, even at similar levels of income and education. (6) This is undoubtedly due in part to the way our health care system is structured, the way that health insurance is tied to employment and the high numbers of uninsured members of these minority groups in the workforce. We may be aware that these disparities exist, but apparently the lives of Black people don’t matter enough for the general population to demand change, for instance to provide universal health care available to everyone, which is what we would have if Black lives — and indeed, all lives — really mattered.

Structural injustices in education: During the 2015-2016 school year, Black students constituted only 15% of the total U.S. enrollment but made up more than one-third of students who were expelled, even though the U.S. Department of Education concluded that this disparity is “not explained by more frequent or more serious misbehavior by students of color (7). Moreover, as much as our Catholic schools try to enroll as many students of color as possible, the fact is that the cost of tuition — even with scholarships — puts parochial school education out of reach for most of these children. This is a structural problem for which we have not found a solution.

If you and I are truly pro-life we are obligated to work for the protection and respect for human life from the first moment of conception to natural death and every stage in between, and thus it is obvious that racism is a pro-life issue. Racism is a sin, and we have to admit that even as Church, we have not been immune to racial bias and the blindness to structures of sin that affect how our own institutions are run. Of course, we condemn the acts that have led to the deaths of George Floyd and countless other people of color, but we are often blind to the other things described above that are part of our lives and continue to do harm. And of course “the generational effects of slavery, segregation, and the systemic use of violence, including the lynching (publicly approved hangings) of more than 4,000 black men, women and children across 800 counties throughout the United States between 1877 and 1950, are realities that must be recognized and addressed in any process that hopes to combat racism.(8)

I hope this has helped you understand why it is so important for us to insist that Black Lives Matter and to view the task before us through the pro-life lens of our Christian belief in the God-given intrinsic dignity of every person, in this case Black people, rather than the more secular Marxist-inspired class struggle lens that some would propose and which sometimes gets disproportionate coverage in the news. I encourage you to read the Pastoral Letter of the United States bishops titled “Open Wide Our Hearts: The Enduring Call to Love, A Pastoral Letter Against Racism,” which provides a comprehensive discussion of the ills of racism and how we can draw on our faith to combat it.

[1] The Sentencing Project. “Report to the United Nations on Racial Disparities in the U.S. Criminal Justice System.” https://www.sentencingproject.org/publications/un-report-on-racial-disparities/.

[8] “Open Wide Our Hearts: The Enduring Call to Love, a Pastoral Letter against Racism”, p. 15. http://usccb.org/issues-and-action/human-life-and-dignity/racism/upload/open-wide-our-hearts.pdf