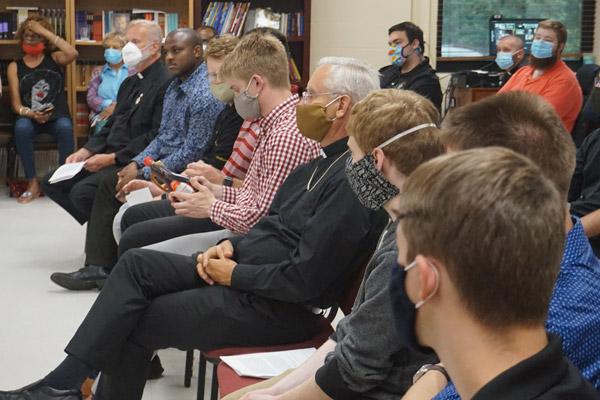 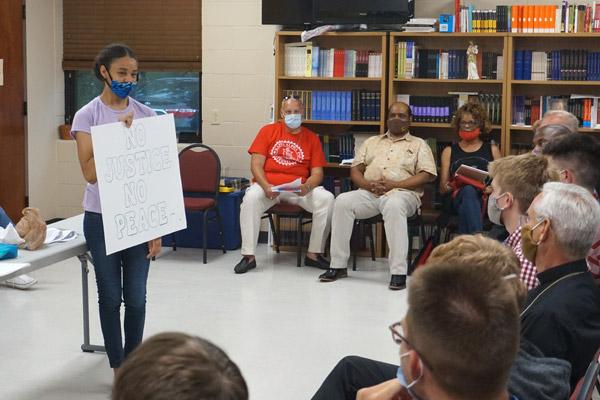 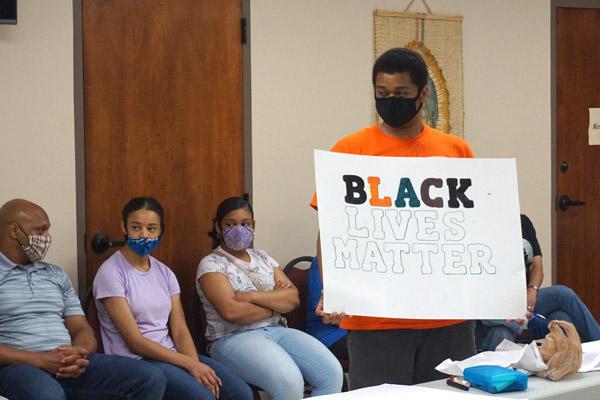 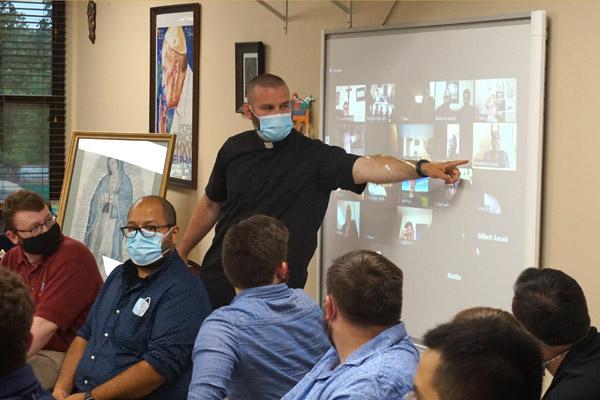 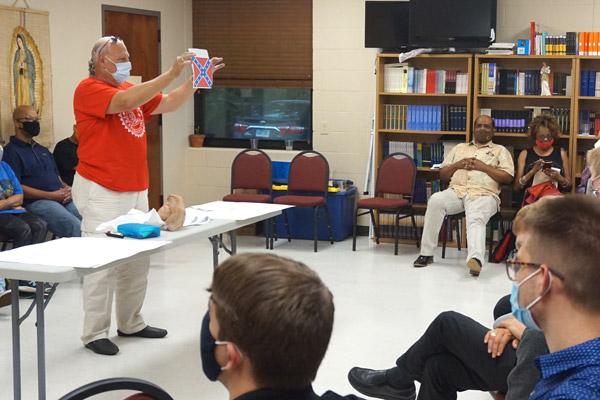 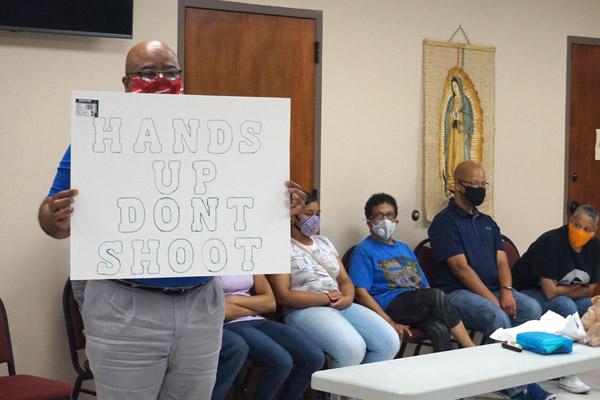 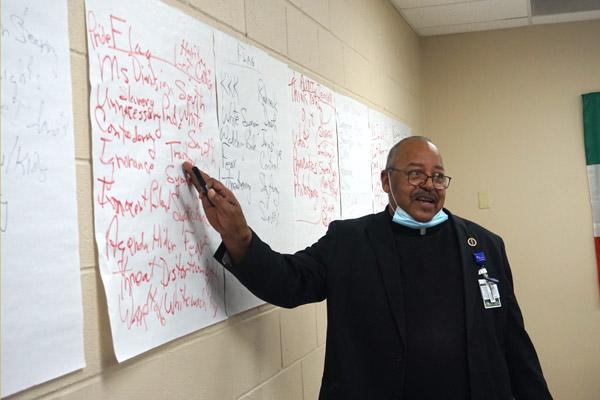 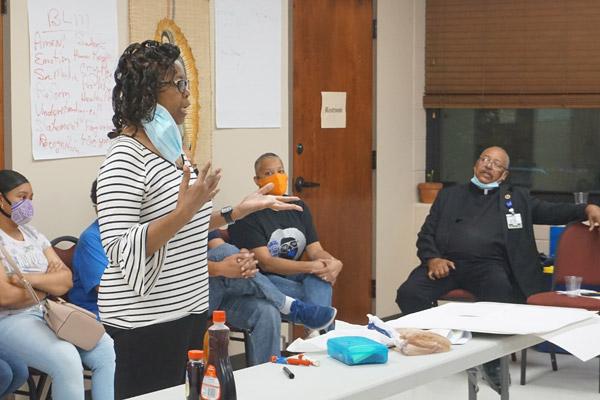 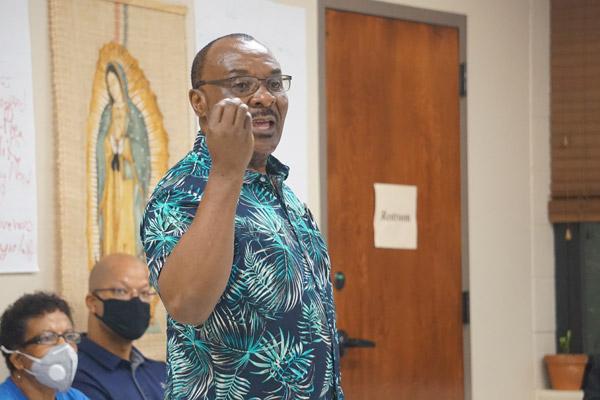 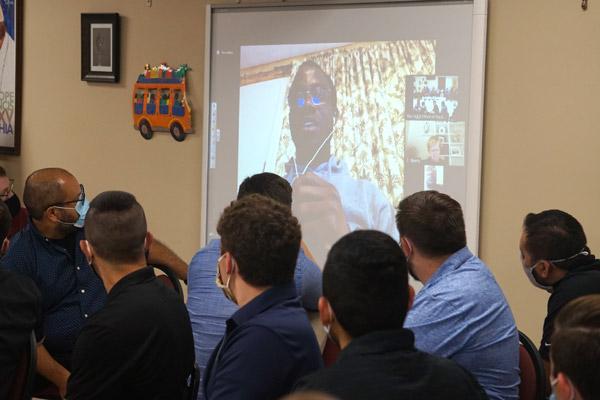 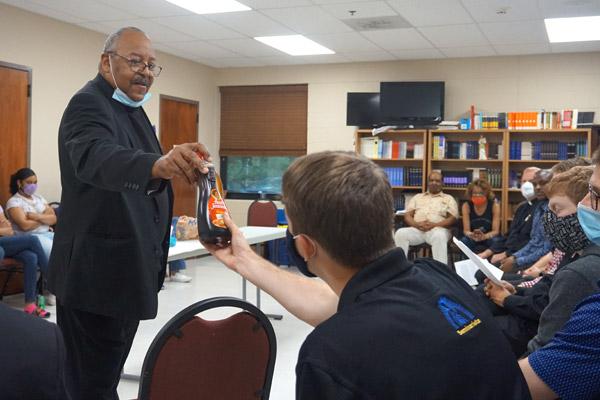 Aprille Hanson
Father Warren Harvey, the bishop’s liaison to the Diocesan Council for Black Catholics, hands a bottle of Aunt Jemima syrup to seminarian Thomas De Prez to pass around the room at the House of Formation in Little Rock July 2. Father Harvey led the listening session for the Diocesan Council for Black Catholics with seminarians about racism.

Aprille Hanson
Father Warren Harvey, the bishop’s liaison to the Diocesan Council for Black Catholics, hands a bottle of Aunt Jemima syrup to seminarian Thomas De Prez to pass around the room at the House of Formation in Little Rock July 2. Father Harvey led the listening session for the Diocesan Council for Black Catholics with seminarians about racism.

Father Warren Harvey held up a bottle of Aunt Jemima syrup and then a salt shaker in the likeness of the racial stereotype “Mammy,” as seminarians and priests at the House of Formation in Little Rock were asked to say the first words that popped in their minds.

Words and phrases like “I don’t think we think anything of it” and “pancakes” were thrown out, followed by “why is she smiling” and “the movie ‘The Help,’” for the shaker.

When members of the Diocesan Council for Black Catholics gave their first reactions, most of them replied “derogatory,” “stereotype,” “slave,” “cultural appropriation,” “anger” and “economic slavery.”

“There’s something that runs deeper than this superficial stuff … we tolerated it, but you never really knew how it affected us,” Father Harvey said.

The Diocesan Council for Black Catholics gave a lesson in perspective July 2, a listening session meant to help the future priests of the diocese understand the racial inequality that exists in society and in the Church. Several diocesan priests also watched via a Zoom video call. Earlier that day, Bishop Anthony B. Taylor, who also attended, released a statement on the Black Lives Matter movement and racial inequality. Father Harvey, the bishop’s liaison to the DCBC, stressed that the council was not there to figure out a solution to racial injustice, which is long term, but for understanding.

“We come to you as Catholic people, Catholic sisters and brothers, to say we’re all in this together in the Church,” he said. “... We wanted to come to you as Church, and starting with you seminarians, our future Church leaders, our future priests, pastors, associate pastors. Our future mentors, spiritual directors, we come to you to say please hear us in formation. Don’t get ordained with these blinders on.”

At the start of the session, Father Harvey referenced the COVID-19 pandemic, while also noting it is “not the only threat to our nation,” emphasizing how “systemic racism is like a national chronic disease. Throughout multiple generations our nation has lived with this reality.”

In addition to the objects that were passed around, signs were held up with phrases such as “Black Lives Matter” and “Hands up, don’t shoot,” “No justice, no peace,” to elicit reactions.

“A lot of white folks when they see that ‘No justice, no peace,’ uh oh, you want to get out there and fight for something. But we’re saying we’re not going to take it anymore. Four hundred years is a long time, it’s overdue. We want accountability, enough is enough. This speaks volumes for us when we see that,” Father Harvey said.

The statement “Black lives matter,” is a common refrain now. While some react saying, “All lives matter,” Father Harvey said, “Yeah, but all lives aren’t the ones at stake right now, it’s Black lives.”

When shown an image of the confederate flag, the first reactions from the Black council members were “KKK” and “white supremacy.”

“(No seminarians) mentioned KKK, but that comes ready to mind with us,” Father Harvey said. “I remember any time I see this flag somewhere over a house I’m like oh my God. And believe me when I’m driving around Arkansas helping out with Masses, I see it … A lot of things we tolerate just because we had to if we wanted to keep our jobs,” he said.

Black members of the council then shared stories of racial injustice and fears they’ve experienced over the years. John Ekeanyanwu, a native of Nigeria and a member of Our Lady of Good Counsel Church in Little Rock, came to the United States in the 1980s, attending college at Arkansas State University in Jonesboro. He was accustomed to meeting people from “different walks of life,” so racism in the South was a new concept.

Once, he was invited by a friend to learn how to skate in Paragould. While at the rink, a person skated close to her and whispered into her ear.

“She told me, ‘Let’s get out of here. Just keep looking forward, go to your vehicle,’ this was in ‘82 before cell phones. ‘I’m going to run to my house and call the sheriff. Drive as fast as you can to get out of here, they’re going to beat you up.’ I’m going, what did I do? I just didn’t get it,” Ekeanyanwu said. “I got in my car, my whole body was shaking, I’m driving as fast as I can and rocks were raining on my vehicle. Folks were running after me throwing rocks.”

While watching via Zoom, Father Joseph Archibong, who is also a native of Nigeria and pastor at St. Anne Church in Berryville and St. Elizabeth in Eureka Springs, said it’s important to remember that beyond systemic racism, there’s unconscious exclusion. He pointed to the various Hispanic symbols hanging on the walls in the room, but not one display that “cries out Black.”

“Because maybe nobody really thought about that. Which I believe is something we need to be conscious of even in trying to reach out. Because I don’t reach out to you from my point of view, I try to listen to you to see what you need,” as a priest, he said. “... One thing that I see very often when you bring up an issue like this, somebody says, ‘Oh I’m not racist.’ No, you’re not, and you are right, but then you might be acting in a way that even unconsciously excludes me.”

Jo Evelyn Elston, a parishioner at Good Counsel, grew up in Chicago, but recalled summers as a child visiting her grandmother, a farmer in Parkin. She gave them the “talk” on “how you react to white people.” At the local drug store, she watched her grandmother address a roughly 3-year-old white girl as “Miss.”

“My grandmother must have been about 60 years old at that time. And, of course, she looked at me and wanted me to say it … I could not bring myself to say that,” she said, teary eyed. “This was not the only indignity she experienced. But she was beholden to those people because she had to have the money to buy the seeds for her crop and sell it back to them when it was in and so it was sort of a relationship, born of necessity but steeped in prejudice and disrespect.”

Caleb Hamilton, 23, a parishioner of Immaculate Conception Church in North Little Rock, shared about a trip heading back to college with a fellow Catholic High graduate. His white friend was speeding and when he was pulled over, the police officer asked Caleb directly several times if they had narcotics in the vehicle and asked to search it.

“There’s no reason to suspect I have narcotics in the vehicle. And he could have at least asked both of us at the same time and pretended like he was at least asking both of us. He made it a very clear point to ask just me,” he said.

First-year seminarian Sam Ray told Arkansas Catholic that he was surprised to hear how Black youth are given “the talk,” about how to behave around police.

“I think it’s important to know we aren’t born racist,” Ray said, emphasizing the importance of learning how to teach acceptance.

Seminarian Tuan Do, originally from Vietnam, said he was unaware of racial inequality, especially locally.

“I learned about the problem of racism in the United States,” he said, hoping to promote “human dignity and human life.”

Black council members said it’s important to speak out against racism in homilies and to teach the younger generation.

“Y’all will be in parishes and ya’ll are going to have little Black kids and you’ve got to make sure that even the white parents educate those little white kids so they don’t grow up thinking they’re any different than the little Black kids,” said Tim Pruitt, a parishioner of St. Augustine Church in North Little Rock.