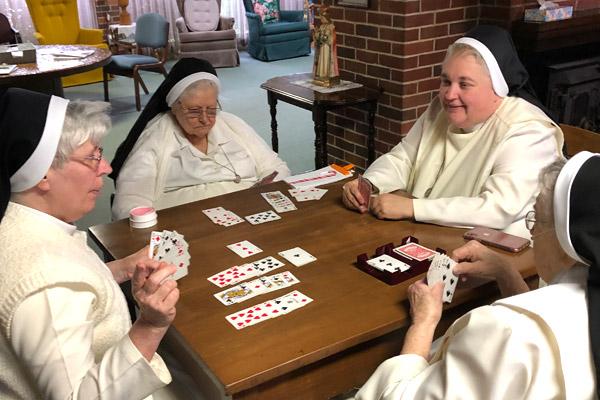 As Laura Cathcart stood near Bishop Andrew J. McDonald and Mount St. Mary Academy principal Sister Richard Mary Burke at Robinson Auditorium in Little Rock for her high school graduation 30 years ago, they did not announce where she’d be attending college or what career she’d be pursuing as they did with the other young women. They announced her calling from God.

She would enter Holy Angels Convent in Jonesboro and become an Olivetan Benedictine sister.

“That was pretty powerful,” she said of the gasps from the hundreds of parents. “... They were supportive, but it was a ‘wow.’”

The sister felt a similar shock June 20 when she was elected and installed as prioress of Holy Angels Convent in Jonesboro. She will serve a three-year term, leading 28 sisters. She replaces Mother Johanna Marie Melnyk, OSB, who began serving in 2017.

“Sister Johanna Marie brought expertise and richness to our liturgies,” Mother Laura, OSB, said. “... I’m very grateful for her leadership and her strength of character and that she has provided a very good example of how to live a monastic life.”

Mother Laura grew up in Little Rock as an only child, attending Our Lady of the Holy Souls Church and School.

“Early on even in elementary school, the sisters here at Holy Angels I had as teachers at Holy Souls. I was inspired by them and my mother (Kathryn Carthcart) worked for the youth department at the diocese,” the 48-year-old said. “Through the interaction with priests and religious, I think that kind of inspired me, it planted that seed.”

When she began seriously discerning her vocation, “it felt like home” when she would visit the convent. She entered in 1990 and professed first vows two years later. In 1997, she made her perpetual vows.

Mother Laura earned a bachelor’s degree in education from Arkansas State University in 1998 and has taught at St. Michael School in West Memphis, Holy Souls School — including when the sisters permanently left in 2010 — and Blessed Sacrament School in Jonesboro, teaching fourth-, fifth- and sixth-grade social studies and religion. She also served in the past as director of religious education and CYM coordinator for St. Paul Church in Pocahontas.

She now will take on a role as leader of the Benedictine convent and chairwoman of the St. Bernards Medical Center board.

“I do try to be happy and joyful,” known to most likely as the “fun nun,” she admits, while still commanding respect. “I think within the classroom I try to provide the students with a sense of trust and confidence so that they would pour forth the best out of themselves into their work.”

For four summers in the early 2000s, she traveled to Nicaragua for mission trips and for her 25th jubilee, she went to India on a pilgrimage to the tomb of St. Thomas.

While Mother Laura will no longer be a classroom teacher, she will focus on being “the instrument that God can use to lead this community where he knows he wants it to be in the future.”

“I want to empower our sisters, much like I try to empower the students to grow closer to Christ in all the ways that they can. That’s what I see my role is,” she said.

When she’s not busy with her new responsibilities, she enjoys learning about different cultures and wood burning.

“It’s one of those things you have to focus on and it makes you block out everything … or else you could catch the house on fire,” she said.

In addition to an increase in vocations, Mother Laura hopes to make sure the sisters continue to inspire others.