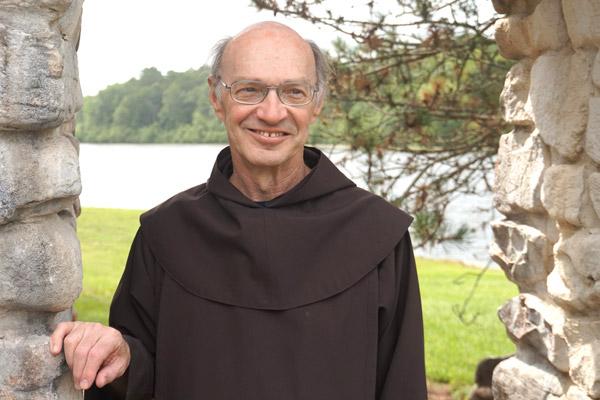 Aprille Hanson
Father Jerome Earley, who has been a Carmelite priest for 25 years, was named superior of Marylake Monastery June 22. He hopes to create a new vision and purpose for Marylake and more ways to serve the diocese.

Aprille Hanson
Father Jerome Earley, who has been a Carmelite priest for 25 years, was named superior of Marylake Monastery June 22. He hopes to create a new vision and purpose for Marylake and more ways to serve the diocese.

Father Jerome Earley is drawn to classic film. Whether it’s the religious themes in the 1946 film “The Razor’s Edge” or the poetic words in 1942’s “Casablanca,” he feels a kinship to characters who are faced with making a decision, the right one, and the broader thoughts of how God fits in it all.

“The older movies, they have a message. They’re more thought out. What is one’s relationship to God, one’s relationship to other people? What are values?” the 69-year-old said. “When does one have to stand up to the truth? I call them films more than movies. There’s a growth in the characters where they have to make a decision.”

His journey to religious life 25 years ago, plays out like a classic film, making the ultimate decision to follow God. Father Earley, who has served at Marylake Monastery in Little Rock for six years and was recently named superior, celebrates his jubilee Dec. 16.

Born and raised in the Finger Lakes Region of Cortland, N.Y., with four siblings, the cradle Catholic had a “very simple, very basic Catholic upbringing.” In eighth grade, he thought of becoming a priest. After graduating high school in 1969, however, he attended Binghamton University in New York, earning a bachelor’s degree in film. He worked as a bartender, in a media library and as a librarian for the Buffalo Courier-Express.

He earned a master’s degree in library science from the State University of New York at Buffalo in 1981. While living in Buffalo, he felt the call again to religious life. He joined the third order Discalced Carmelites as a layperson around 1976.

He began exploring a variety religious orders, realizing the Discalced Carmelites was his home.

He became a novice in 1989 in the Washington Province. In a four-month span, he made solemn vows, was ordained a deacon and was ordained a priest Dec. 16, 1995. To help in the Southern Province, he spent a few months at Marylake in Little Rock, before going to New Orleans to continue seminary study and served as the rector.

Father Earley served in San Antonio, Texas, for three years and Dallas for 12 before coming to Little Rock. Throughout his years in ministry, he has enjoyed giving retreats the most.

“I’m meeting the laity who are very enthralled by the mystical life, contemplative prayer … Teaching and helping people build their prayer life and not just in a method manner but what is the heart searching for?”

Father Earley travels coast to coast giving retreats at least once a month and is also a spiritual director. His focus has been “the indwelling presence of God by means of purity of heart.”

“I see in people they don’t know the presence of God overall generally speaking. How do they know God is with them? What is their relationship, or as we’d say in Carmel, what is their friendship with God?” he said. “... Is it a real faith there? God is constantly with us; that changes a person’s life.”

On June 22, Father Earley’s life was yet again changed when his order named him superior of Marylake, leading the three religious priests and several secular orders of laity.

“I said I will never be a superior again. I’m not gifted in that way,” after serving two remaining years back when he was in San Antonio.

Despite the hesitancy, the Holy Spirit is already moving in him. He hopes to help create a vision and purpose for Marylake and how to best serve the Diocese of Little Rock, again hosting retreats.

“One of my desires is to keep the contemplative way of life foremost and to deepen out of that our mystical relationship, friendship with the Lord, our Blessed Mother, our angels and saints and the way we as all people, neighbors, friends, family,” show each other that everyone is precious. “That we really are God’s children.”