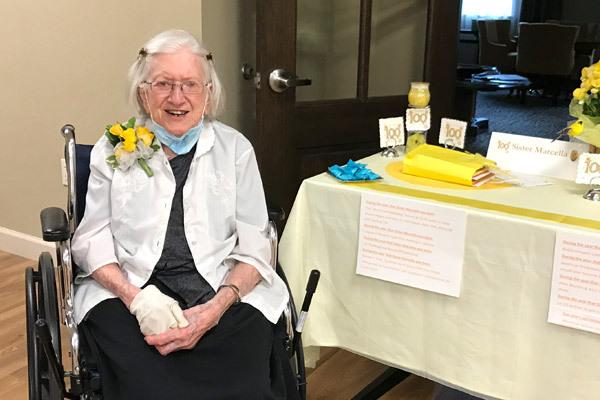 During a dinner with her community at St. Scholastica Monastery in Fort Smith, they enjoyed shrimp cocktail, angel hair pasta and lemon-filled cake. The dining hall was decorated with yellow roses to mark her 46 years at St. Benedict Monastery in Canyon, Texas. Not even a pandemic prevented her from enjoying the moment and being grateful for a long life.

She grew up in Paris, Ark., the middle child in a family of five girls and one boy. She heard God’s call to become a sister when she was 8 as a student at St. Anne School in Carbon City (Logan County), but in 1936, in the height of the Depression, she followed her three older sisters to California to find work.

When asked whether she still had a bucket list, Sister Marcella said her seven years in California gave her the chance to check off most of it.

“I had my tennis racket and my skates and ice skated to music with a partner and enjoyed that, but God had placed his call in my heart. I would walk to Mass every morning and go to work as a beautician on Wilshire Boulevard in Beverly Hills. One day I was at work and it came to me that it was time to go to the convent. I went home to my parents in Paris and entered St. Scholastica.”

Sister Marcella made her monastic profession in 1943, receiving the name of Sister Mary Benoit. During her 28 years at St. Scholastica, she served in parishes in Center Ridge, Lake Village, Atkins and Little Rock as well as Crawford County Hospital, St. Joseph Orphanage in North Little Rock and St. Joseph Hospital in Boonville, Mo.

In 1971, she was one of five founding members of St. Scholastica’s second daughter house, St. Benedict Monastery in Canyon, Texas, living there until it closed in 2017. In the small community, she wore many hats. She worked in St. Anthony Hospital in Amarillo as a nurse’s assistant and pastoral care associate until she was 76 and served in the monastery as a vocation and oblate director, subprioress, cook-dietician and gardener.

Judith Varga, who lived in St. Benedict Monastery where she was known as Sister Hildegard, called Sister Marcella the “energizer bunny.”

“She took great pleasure in keeping the cookie jars filled with sugar, oatmeal raisin and molasses cookies. She was also our chief bread maker and mixed dough by hand in a bowl big enough to make eight loaves at a time. She was known for her bread and butter pickles, and before St. Benedict’s closed, she presented Bishop (Patrick) Zurek six jars of canned tomatoes and pickles.”

At St. Scholastica, she participates in the ministry of prayer. With her sharp mind, she enjoys playing games with the other sisters in the evening, especially a card game called 9-Hole Golf. She enjoys reading the works of Pierre Teilhard de Chardin, St. Catherine of Sienna and St. Julian of Norwich and the Bible.

“I have read the Bible many times. I read one passage from the Old and New Testaments every day,” she said.

Sister Marcella enjoys talking on the phone to her only surviving sibling, Estelle, 97, who lives in California. Last year, for her 99th birthday, Sister Kimberly set up a Zoom video call so that she and Estelle could talk face to face, but they usually talk on the phone. “I’d rather just do that. It was nice when I saw her, but I like to remember her as she was when I lived there.”

When asked what advice she could give young people in these challenging times she said, “God wants us to think about him more. Wake up, people, wake up. I see God in what’s happening. When I had hard times, I stayed close to God and accepted it, and God lived close to me and took care of me. I didn’t know as much then as I do now.”