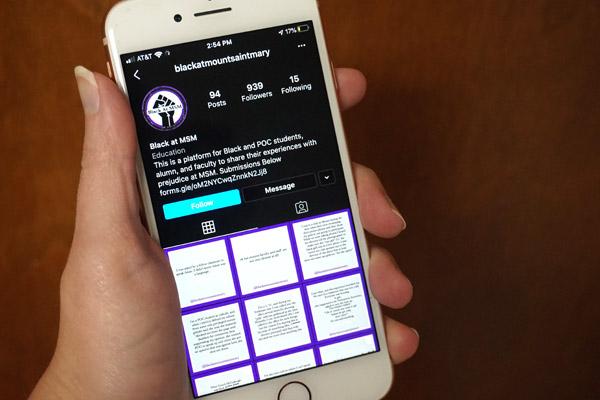 Aprille Hanson
Two Instagram accounts, Black at Mount St. Mary and Black at Catholic High, were created for students to anonymously post discrimination they faced at the school.

Aprille Hanson
Two Instagram accounts, Black at Mount St. Mary and Black at Catholic High, were created for students to anonymously post discrimination they faced at the school.

In a time when society is examining its response and failures to eradicate racism, Mount St. Mary Academy and Catholic High School, both in Little Rock, are exploring ways to better promote the values of inclusivity, partly in response to the “Black at Catholic High” and “Black at MSM” Instagram accounts.

In late June, CNN reported about 40 of the anonymous “Black at” Instagram accounts had popped up across a dozen states, where students and alumni could post anonymously about racism and other forms of discrimination they experienced or witnessed at their schools.

The @blackatmountsaintmary account had 94 posts since June 25 and @blackatcatholichigh had 10 since June 26, detailing personal experiences of discrimination on the basis of race, ethnicity, sexual orientation and disabilities.

“I am a POC (person of color) that grew up in Pine Bluff. Whenever I’m asked where I went to school before Mount and I say PB, they always reply with ‘Oh, so the ghetto town?’” one post on Black at MSM read. Another detailed how at Catholic, “I have been called ‘*****r’ by my friends as well as other black guys. We are too scared to say anything, but it hurts in my gut when I hear that word.”

“Understandably I was shocked and disappointed, and it is painful to read the comments,” said MSM president Dr. Pattie Davis, emphasizing that she, along with principal Sara Jones and some teachers have read all the comments.

“We do see this as an opportunity. We’ve really taken this moment as a time to reflect on our community and our faith community at Mount as a reintroduction and commitment to our Catholic and Mercy values.”

For this coming school year, Davis said a committee will be formed with faculty, parents, alumni and a separate student component. They will examine the diversity of their board and faculty, financial aid and curriculum.

While there is a video circulating of an alleged Mount St. Mary student in black face, with her father using the N-word, Davis said she could not comment on disciplinary actions publicly due to the Family Educational Rights and Privacy Act (FERPA).

As Instagram comments also pointed to bias and discriminatory statements from the staff, Davis said they are looking at additional staffing or diversity training. A voluntary book club focusing on issues of systemic racism was formed this summer by counselor Emily Coffey with about 29 faculty and staff members.

In 2017, CHS principal Steve Straessle was on the Little Rock Racial and Cultural Diversity Commission and met a diversity inclusion specialist.

The school went through a diversity assessment and has since focused on better marketing to minority populations and looking at ways for a more diverse student body and faculty. The IDEALS Institute with the University of Arkansas will provide training for teachers primarily about inherent bias.

While Straessle admits “I cringe” at the anonymity of the Instagram posts, “A school administrator can find some truth and guidance in those posts.”

“Generally speaking, a Catholic school administration should have already made a strong statement personally by the way they live their lives and run their schools to the idea racist behavior or actions are not tolerated whatsoever … but what’s going on in the hallways and in the classrooms, those are things that these pages can help us with,” he said.

CHS is also forming a diversity council, made up of minority alumni and students, with the administration present to “do a lot of listening,” he said.

In both accounts, comments of support for the schools poured in, while also acknowledgements of sadness for the pain students had experienced. As of press time, account creators only offered to be interviewed by text messages with Arkansas Catholic, but declined phone interviews or to be identified.

In a statement the administrator for @blackatcatholichigh stated, “We do not believe that Catholic High is a racist institution, and we don’t believe that Catholic High in any way promotes racism … Many have messaged us about their experiences with Catholic High students but have asked us not to post them for fear that the ‘brotherhood’ would find out who it was and socially shun them. We have received threats from CHS alum and current students ranging from revealing our identity, address, phone number and even some threats on our lives. We know many loved their experience at CHS, but we need to acknowledge the racist actions of many CHS boys.”

Marvin Boyd, a 1988 graduate of Catholic High and parishioner at Christ the King Church in Little Rock who is Black, will be a member of the diversity council.

“If we have the ability to call it out like it is and shine a light on it and say, ‘This is not what Catholic High School is about, it’s not what Catholicism is about or Christianity is about,’ this is really an opportunity to change hearts and minds,” Boyd said.

Beverly Thornton, a 1987 graduate of MSM who is Black, said while she cannot speak for every person of color about their experiences, as a shy girl raised by a single mother, she found her voice at MSM.

“I always thought that any day I was going to lose my place at Mount St. Mary,” due to the cost of private education. She was told however, “as long as you want to be there, you’ll be there. That’s something that’s forever etched” in her mind.

As a parent of MSM junior Jade Coates, she was concerned by the Instagram page. She spoke with Davis and principal Jones and offered her participation in the diversity committee.

“I do think it starts with open and honest dialogue,” she said. “... If it’s a place where a girl gets her voice, when she decides to speak, we can’t silence her.”

Before attending MSM, Coates experienced racism in eighth grade at her former private school from a teacher, who is still teaching.

“Mount’s kind of been my home in a sense. It’s made me feel safe. The fact that they’re attempting to make changes to make everyone safe” is commendable, Coates said.

While she has not experienced discrimination at the school, some of her friends have. She is one of three Black students in her grade.

“I know one experienced it from a teacher … I just know the student did feel very uncomfortable with that teacher and felt like he was being very racist,” Coates said.

When the Instagram accounts were created, Coates said she was disappointed the administration did not reach out to Black students, but feels the school is moving in the right direction.

“I wanted them to reach out because I know it’s a difficult topic to talk about, but I thought it was the right thing to do because I felt really alone. I will say my volleyball coach reached out to me,” Coates said. “... I feel like it’s important for us to have a voice, one because there’s not a lot of us that go there. I think it’s very important we do have a voice and we’re able to speak out on what we feel might be offensive, because some people might not exactly get it.”

Caleb Hamilton, a 2015 graduate of Catholic High, said he has experienced racism throughout his life, but “I never had that at Catholic.”

“I did have a few moments where people would say the N-word. But it always felt like the kid was trying to get a reaction, as opposed to ‘I don’t like your race,’” said Hamilton, a parishioner at Immaculate Conception Church in North Little Rock.

While it doesn’t excuse the use of the word, Hamilton said he felt supported by the faculty, particularly his government teacher Paul Spencer. While at CHS, the Black Lives Matter movement had begun and it was discussed in class.

“Just knowing this was going to be a topic in government class, but knowing Mr. Spencer was going to be the teacher was a relief from the beginning. He always asked for my input, but it never felt like he had to force something out of me,” he said.